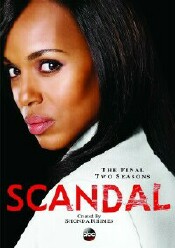 Scandal, which followed the exploits of elite Washington D.C. fixer Olivia Pope and her torrid on-again/off-again relationship with the president of the United States, was never the Best Drama on television. But if the Emmys handed out a prize for “Most Drama,” this Shonda Rhimes-created soap opera would’ve been a shoo-in each of its seven seasons. So the fact that ABC released the final two seasons of Scandal in a handy bundle means there are almost too many twists and turns to count.

The final two seasons of Scandal find the people in the previous two paragraphs constantly shifting allegiances (and jobs). Let’s get to it.

The sixth season of Scandal opens with a literal bang: a cabin in the woods explodes in the very first scene and president-elect Frankie Vargas (Ricardo Chavira) is shown getting assassinated minutes later. The killing leaves the Oval Office up for grabs, with Cyrus (Frankie’s running mate) and Mellie (Frankie’s opponent) vying for the job. However, most of the season is spent re-visiting the heated presidential campaign and showing key events from the perspective of almost every significant character leading up to Frankie’s killing.

The season’s format allowed certain actors in the show’s massive cast to shine; my favorite episodes were the ones centered around Mellie (insecure, star-crossed, but determined), Cyrus (beaten down physically and emotionally, but as resourceful as ever), and Huck (dealing with inner demons as he fights for his life). That being said, Scandal largely thrived because of its breakneck pacing: by the time you started to wonder if the crazy thing that just happened makes sense, another two or three crazy plot twists/monologues have clubbed you upside the head. As a result, the constant flashing back significantly hampered the show’s signature forward momentum.

So it’s no surprise that my favorite installments of this 16-episode season occurred in the latter half. They included Ep. 10/“The Decision” (an alternate history of the show if Olivia hadn’t originally rigged the first election for Fitz; it’s a flashback, but at least we’re not flashing back to the same Frankie/Mellie campaign shenanigans), Ep. 13/“The Box” (violently wraps up the season-long threat from the shadowy Fund for American Renewal), and the finale/“Transfer of Power” (Fitz thinks he’s going to run B613 after leaving the Oval, but someone else assumes command). Season 6 also featured Olivia drifting further away from Olivia Pope & Associates (OPA) and closer to the White House, as she resolves to get Mellie installed as the first female U.S. president.

“Watch out for Olivia Pope…she’s the devil.”

Mellie Grant might be sitting in the Oval Office, but Olivia Pope is the one in Command. Olivia becomes the new head of B613, which gives her unlimited power to make dangerous (and sometimes deadly) moves that she considers to be in the republic’s best interest. Cyrus is vice president but continues to have the Oval in mind as he starts up a relationship with flamboyant billionaire Fenton Glackland (guest star Dean Norris). Meanwhile, OPA has become QPA (Quinn Perskins & Associates), as a pregnant and engaged Quinn becomes the new head of the agency and tries to build a new client base.

Whereas season 6 of Scandal kept getting stuck in the past, the central question for the show’s seventh season is much more compelling and forward-looking: can Olivia Pope’s soul be saved?  Her prospects don’t look great in Ep. 7/“Something Borrowed,” when Olivia has to decide between maintaining command of B613 and saving the life of a beloved friend on the eve of Quinn’s wedding. And Ep. 10/“The People v. Olivia Pope” brings together all her current and former allies for some tough love. To her credit, Washington does not shy away from Olivia’s extremely unlikable qualities throughout the season.

Season 7 is overall a more typical (and more entertaining) season of Scandal than its direct predecessor. The action firmly centers around Olivia, but the talented supporting cast gets plenty of opportunities to shine. Mellie begins a complicated, ill-fated romance with the president of a fictional Middle Eastern nation. I also enjoyed Ep. 3/“Day 101” (a semi-bottle episode centered on Fitz that shows just how boring being an ex-president can be) and Ep. 13/“Air Force Two” (which kicks off the belated rise of Cyrus). Olivia even gets a Shondaland assist from Oscar winner Viola Davis, who pops up as her How To Get Away with Murder character Annalise Keating in Ep. 12/“Allow Me to Reintroduce Myself.”

Scandal: The Final Two Seasons features all 16 episodes from the sixth season on four discs, along with all 18 episodes from the seventh season on four discs. The only bonus material in each set are extended versions of the finales. (“Transfer of Power” for season 6, and “Over a Cliff” for season 7.) Both seasons here featured the usual amount of ALL CAPS monologues (Morton, who previously won a Guest Actor Emmy, gets the absolute most out of the line, “I want my bones!!!”) and hilariously WTF moments (Olivia walking up to Abby and smacking her in the face…repeatedly.) For better and worse, the show as a whole ended up cramming at least 15 seasons worth of plot twists into its seven years.