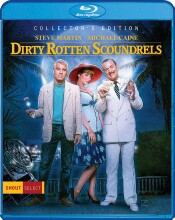 That description is used to describe the unwitting marks targeted by the titular con men in Dirty Rotten Scoundrels. But except for the “very married” part, it’s also a pretty accurate depiction of the Scoundrels themselves, played here by Steve Martin and Michael Caine in a pair of very different but equally winning performances. The movie was released a little more than 30 years ago — Christmastime 1988 — which makes this a fine time to revisit the breezy, sleazy con men comedy thanks to this Collector’s Edition from Shout Select.

Lawrence Jamieson (Caine) is a suave and sophisticated English con man who operates in the town of Beaumont sur Mer on the French Riviera. With the help of corrupt police official Andre (Anton Rodgers), Lawrence seduces and scams rich married women by posing as a prince in peril. It’s a very lucrative set-up until Lawrence bumps into Freddy Benson (Martin), an upstart American hustler making his way to Beaumont sur Mer. Lawrence has received word of a con artist known as “the Jackal” operating in the area, so he is on high alert when Freddy enters the picture.

“I tell ‘em what they wanna hear if it gets me what I want.”

After initially trying to get rid of Freddy, Lawrence decides to keep his enemy close by taking him under his tutelage and attempting to smooth out the American’s rougher edges. Freddy eventually bristles at Lawrence’s rules and instruction, and the two make a semi-friendly wager: the first man to con the next woman they see — which turns out to be “U.S. Soap Queen” Janet Colgate (Glenne Headly) — out of $50,000 wins. The loser has to leave the French Riviera.

It’s a timeless, fantastic set-up, which is why it’s not surprising to learn Dirty Rotten Scoundrels is a remake of the 1964 Marlon Brando/David Niven film Bedtime Story. (Caine’s thin mustache and slicked-backed hair as Lawrence are a direct homage to Niven.) Dirty Rotten Scoundrels has also been turned into a Broadway musical with John Lithgow and Norbert Leo Butz as Lawrence and Freddy, respectively.

Still, it’s this 1988 film — directed by Frank Oz — that made the most indelible impact. Part of that is the fantastic French Riviera setting; if this movie were made today, I imagine various parts of Georgia would somehow stand in for the south of France. Another important part of this film’s success is a screenplay that is equal parts sharp and silly.

I liked, for example, that the script made Lawrence smart enough not to underestimate Freddy, even when Lawrence’s rival seemed like a boorish American dummy. Oz also has some fun staging both the comedy set pieces (Lawrence relishing the chance to whack Freddy’s legs while the latter is pretending to be paralyzed) and the movie’s most serious moment at the very end: Oz shoots Lawrence and Freddy from behind as they calmly sit on a bench overlooking the sea and have a heart-to-heart. It’s a surprisingly affecting scene.

All that being said, this movie works because of the chemistry of its two stars. (Check out the interview with writer Dale Launer in the Special Features to find out how they eventually landed on Martin and Caine.) Martin is still at the peak of his comedic powers at this point. The actor gets to show off his prodigious talent at improv (during the scene where Freddy is trying to remember Lawrence’s name in jail) and physical comedy (Freddy posing as the dim-witted Ruprecht alongside Lawrence). Caine, with his perfect posture and purposeful mannerisms, is a great counterpart for Martin’s energy. But the fact that Caine has a pretty mischievous twinkle of his own in his eye means he and Martin aren’t quite polar opposites. In fact, they’re an ideal match.

Headly, who unfortunately passed away in 2017, also delivers strong work here. This was the actress’s breakout role and her breathy voice served Janet’s damsel character very well…and helped us fall for her along with Lawrence.

Dirty Rotten Scoundrels is presented in an aspect ratio of 1.85:1. The 1080p image is arrived at with an AVC MPEG-4 codec at an average of 30 mbps. This Shout Select release boasts a “brand new 2K scan” but the movie thankfully retains the look and spirit of the original release. That means we get some nice bit of filmic grain, particularly for the more picturesque exterior shots. The warm flesh tones are no surprise given the film’s French Riviera setting, but this image also boasts some rich colors; the (artificially-lit) blue water over the opening credits is a standout. Yes, there are some instances of artifacting — particularly early on — and the movie certainly looks its age, but I don’t necessarily think the latter is a bad thing.

The DTS-HD Master Audio 5.1 track is (not surprisingly) front-loaded to the max, which is a shame because I would’ve loved to have been further immersed in the French Riviera. Instead, almost all the action is confined to the front speakers, which isn’t all that unusual for a dialogue-driven comedy from the 1980s. It’s just that there were more than a handful of instances — a scene on a train, another in a casino — that offered the opportunity for greater activity throughout the sound field. The track does perk up during a late sequence at a dance club and when Martin’s doltish Ruprecht character noisily destroys some mantel pieces. Most importantly, the soundtrack is free of pops or any sort of distortion…so the jokes and pointed barbs come in loud and clear.

There is a new HD interview with writer Dale Launer, but the rest of the bonus material is presented in standard definition and has been ported over from previous home video releases.

Commentary with director Frank Oz: The director recorded this commentary in 2001, which was 13 years after the movie’s release. As a result, this track is both analytical (Oz takes us through the nifty bit of camera work that introduces us to Steve Martin’s character on a train) and an informative walk down memory lane. Oz refers to the production, which filmed all over the south of France, as “a hell of a shoot.”

Interview with writer Dale Launer: (23:25) The screenwriter — who penned the script with Stanley Shapiro and Paul Henning — takes us through the wild development process for Dirty Rotten Scoundrels, which was originally conceived as a vehicle for David Bowie(!) and Mick Jagger(!!). At one point, Steve Martin was cast as Lawrence before finally settling in to play Freddy. Launer walks us through several different versions of the script, including one in which Lawrence catches on to the Jackal’s con prior to the end of the movie. Some really interesting stuff here.

Vintage Featurette: (6:47) “Vintage” is right. There’s some cool footage of Martin and Caine hanging out on set and discussing their cagey characters. There’s also interview clips with Oz and the late Glenne Headly.

Teaser Trailer: (1:04) We don’t usually get into trailers or teasers in these reviews, but this one is notable for featuring an amusing scene that wasn’t in the movie…

Teaser Trailer with Commentary: (1:04) …director Frank Oz informs us that the plan was always for this scene — which features Martin and Caine casually strolling along the French Riviera before unleashing a bit of bad behavior — to serve exclusively as a standalone trailer. Audiences were disappointed it wasn’t included in the final film.

This summer is supposed to bring us a female-centric Dirty Rotten Scoundrels remake called The Hustle with Anne Hathaway and Rebel Wilson. (Yikes!)

If that movie is half as good as Dirty Rotten Scoundrels, it should be considered a success. Either way, I recommend you check out this recent release from Shout Select, especially if you’ve never seen this film before. (And even if you have, the instructive interview with Dale Launer is worth a look for sure.)

Unlike spending time with Lawrence and Freddy, you won’t have to worry about feeling like you got ripped off.

Welcome To The New Look Of Upcomingdiscs! The Nutcracker and the Four Realms (Blu-ray)