Posted in: Disc Reviews by Gino Sassani on March 6th, 2019 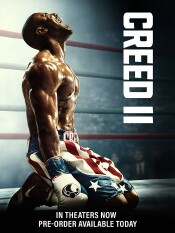 “In the ring, you got rules. Outside, you got nothing. Life hits you with all these cheap shots. People like me, we live in the past. You got people that need you now. You got everything to lose; this guy has got nothing to lose.”

For the last couple of decades the sport of boxing has lost much of its popularity, at least here in the United States. The big matches used to be events where neighbors and friends would gather and enjoy the spectacle together. It likely started when long-time fighting fan and announcer Howard Cosell distanced himself from the sport, and the collapse appeared finally complete around the time Mike Tyson added ear to his menu. It’s devolved so far that I haven’t known who the champ is for more than 10 years. Everyone used to know the champ. It didn’t matter if you followed the sport. The names used to be household names. No longer. That doesn’t appear to be as true with the boxing movie. Films like Rocky and Raging Bull helped to create an entire genre of the boxing movie, and it has survived the real thing. In 2015 Sylvester Stallone partnered with director Ryan Coogler to revitalize the aging Rocky franchise and focus the new films on the son of Rocky’s friend and ring-rival Apollo Creed. Together with Michael B Jordan in the new titular role, the franchise saw new light, and Stallone would finally give the performance of his life. Coogler and Jordan went on to join the Marvel Universe and create one of the highest box office takes in history with The Black Panther. Now he’s back as Adonis Creed without Coogler in the director’s chair. This time Steven Caple Jr. directs from a story co-written by Stallone, who wrote the original Rocky back in 1976. I’m happy to say there’s still some heart left in the old man and his franchise.

Time has passed, and Adonis (Jordan) is now the world champ. He’s about to marry his songstress Bianca (Thompson), and they’re about to have a child. Her music career has taken off. Life continues to move in Philadelphia. But in Russia, a different kind of life is also moving. We discover the fallout from the events of Rocky IV. Ivan Drago (Lundgren) was disgraced after his loss to Rocky. His model wife (Nielsen) has left him and his son to live in the squalor of the remnants of the Cold War. But now his son Viktor (Munteanu) is a giant of a man filled with decades of hate fed by his father. He is destroying his opponents in Russia, and now father and son set their sites on revenge by challenging Creed. Rocky wants no part of the deal. He’s haunted by the memories of watching Apollo Creed die at Drago the Elder’s hands and regrets that he didn’t stop the fight. You don’t have to be a veteran of fight movies to see where this is all going.

What surprised me is how quickly in the film we actually get to that first fight. There’s less buildup than I expected and very little fat in the film. It’s no spoiler to reveal that the fight doesn’t go Creed’s way. He’s beaten almost to death, but the fight ends up with an odd resolution. That means there’s going to be a second fight. It’s an absolute formula in this franchise and shouldn’t come as any surprise. This film isn’t about the first fight. It’s about what happens leading to the second fight. Now we get the kind of pacing one suspects and the footage of both fighters preparing for the bout. Just like Rocky IV, this fight will be in Russia, and both Drago men see it as their ultimate return to relevance in a society that is brutal with those who have fallen out of favor. A few cameos by Bridget Nielsen are intended to rub Ivan’s face in his long-since disgrace. These guys hold a grudge, and the only way back to the top is to win. In many ways this film can be seen as a direct sequel to Rocky IV, and Dolph Lundgren adds to the bond between these two film branches.

All of the trappings can be found here, but what I enjoyed most about this film is that it examines the psychology of the fighter in a deeper way than any of the previous films have. The actors let us into their innermost fears, demons, and drives. It’s a film that shows far better than it tells, and that’s a recipe for a pretty good ride. Stallone nearly matches the beautiful performance of the first Creed, and Tessa Thompson’s character really comes into her own here. She’s not quite the ornament and distraction that she was before. She’s much better written this time and makes that much more of a connection with both of the male leads and the audience.

I have to say that I found myself smiling every time the score teased us with that incredible Bill Conti score from the original films. It’s one of the most recognizable movie themes in history, and there’s a reason for that. I was disappointed in whatever powers that be that he only gets credited in the end roll with the other musical credits. He should have gotten much more recognition in the credits, and here I have to say shame on you, Sly. I suspect younger members of the audience didn’t have quite the same experience with Conti’s moments. Yeah, they know the theme, but it isn’t filled with the over 40 years of nostalgia that it is for some of us.

Creed II is presented in an aspect ratio of 2.40:1. The ultra-high-definition 2160p  image is arrived at by an HEVC codec with an impressive average bitrate of 55-60 mbps. What impresses me the most about this film is how much of it is color or tone neutral. There’s not a ton of the color correction which dominates films today. That means things like flesh tones are perfectly reference. There is some tweaking when appropriate, but this film delivers supremely natural colors. The HDR takes that and ups the ante with brightly defined but still natural colors. Black levels are deep and inky with wonderful shadow definition. Details during the fights take you closer than any fight broadcast you’ve ever seen. The contrast is also quite impressive. The intro sections to the fights deliver wonderful pinpoints of light in the stark blackness of a darkened arena.

The Atmos track defaults to a complimentary 7.1 mix. Dialog is front and center while the surrounds complement the important beats of the film. Bill Conti’s subtle score moments elicit the perfect emotional beats. It’s just under the surface so that the emotion hits you before you even realize why. The ring is where the subs add just a bit of accent to the booming crowds and powerful punches. There’s a really quiet surround moment when Creed is in a swimming pool recovering from his first Drago fight. The waters fill the surrounds, and it’s a sweet immersive moment. The crowds also work into the surrounds quite nicely. I must warn you that the audio does not default to the 7.1 presentation. I have found this an issue with Warner discs. The default is the 5.1, so you have to check for it and make the adjustment when the film starts. Not sure why Warner does this, but I hope eventually they pick up on it and change the audio default.

Deleted Scenes: (9:46) There are four and no individual selection.

Fathers & Sons: (7:16) The cast and crew talk about the themes of Fathers and Sons as well as paths to redemption that dominate the film. There’s some input from Sugar Ray Leonard and his son, who live out this father-and-son boxing life.

Casting Viktor Drago: (5:43) This one looks at actor Florian Monteanu, who is also a boxer in real life and had to learn not the athletic side but the acting side. We get a glimpse of his actor training, and he offers his input into the character.

The Women Of Creed II: (5:51) Both Tessa Thompson and Phylicia Rashad add a great deal to the story, and we get a nice look at these leading ladies as they talk about their characters and the heart they bring to the film.

The Rocky Legacy: (15:01) Dolph Lundgren hosts this look at the entire Rocky franchise. We get clips from all of the films, and the cast and crew of this film talk about the inspirations they found in the original movie. It’s fitting that a great deal of time is spent on the emotions that Bill Conti’s original theme had then and still evoke today. It’s unfortunate that the credits of the film don’t respectfully demonstrate that.

By now Michal B. Jordan has established his own name. I can see the franchise surviving the inevitable loss of Rocky Balboa in much the same way we eventually dealt with Rocky’s corner man, Burgess Meredith, for so many years. The torch has been passed. Stallone is scheduled to appear in the last of this anticipated trilogy, but I don’t think that will be the end of Creed. This will be the Rocky for a new generation, helped by the fact that there will always be these three films as a true connection between film runs and the generations of fans that keep them “flyin’ high now” at the box office. Whatever generation you might hail from, “People like a good show.”

Gino Sassani is a member of the Southeastern Film Critic's Association (SEFCA). He is a film and television critic based in Tampa, Florida. He's also the Senior Editor here at Upcomingdiscs. Gino started reviewing films in the early 1990's as a segment of his local television show Focus. He's an award-winning recording artist for Omega Records. Gino is currently working on his 8th album Merchants & Mercenaries. Gino took over Upcomingdiscs Dec 1, 2008. He works out of a home theater he calls The Reel World. Favorite films: The Godfather, The Godfather Part II, The Body Snatcher (Val Lewton film with Karloff and Lugosi, not the pod people film), Unforgiven, Gladiator, The Lion King, Jaws, Son Of Frankenstein, The Good, The Bad And The Ugly, and Monsters, Inc.
Tuesday Release Round-Up For Tuesday March 5th, 2019 The Standoff at Sparrow Creek