The Standoff at Sparrow Creek

Posted in: Disc Reviews by Brent Lorentson on March 7th, 2019 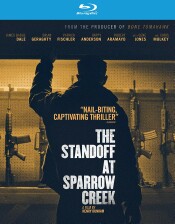 It may only be March, but I’m willing to bet The Standoff At Sparrow Creek will make the list of my top films of 2019.  I’m going to go out on a limb and say that this is the next breakout film people will be talking about, because it’s just that damn good.  Think about what Reservoir Dogs mashed up with Glengarry Glen Ross would be like if they were mashed together and the characters were all members of a militia; then you’ll somewhat have an idea of what The Standoff at Sparrow Creek has in store for you. We’ve all heard rumblings about militia groups, the kind that have their hidden bunkers that have stockpiles of weapons and ammunition that are ready to go into battle at a moment’s notice. At the same time we live in a world where it’s heavily frowned upon to want to own an automatic assault rifle, and those involved with these groups are often depicted as country bumpkins who are military washouts or just “gun nuts”. Well, writer/director Henry Dunham has decided to offer up a new look into this group and even dares to get into their heads and what motivates them.  But Dunham isn’t trying to make any political statements, but instead he’s crafted a well drawn out thriller that explores each of these characters and gives them each motivation for their actions, keeping them human despite their actions at times.

What kicks off the film is a shooting at a police funeral, In a panic to find out who may be responsible, Gannon (James Badge Dale) has all the members of his group meet up at a lumber mill to sort things out.  It’s at the mill where Gannon discovers that a gun and other materials are missing and that the person responsible for the shooting is one of the members of his group.  Knowing the police are going to be out for blood, Gannon decides to interrogate the members of his group in hopes of finding the rogue killer and offering them up in order to preserve the safety of the militia.

The idea of a guy just interrogating members of his militia may at first seem a little dull, but the execution of the dialog and the performances make this a genuine nail-biter.  Everyone has motivation to perform this atrocious act, and just when you think you have it figured out, there manages to be a fun twist in the story.

The cast is filled with plenty of recognizable character actors, but no one I’d consider a big name whose presence would steal the spotlight. Because of this it genuinely keeps you guessing who the shooter could be.  With strong performances by Chris Mulkey, Gene Jones, and Patrick Fischler, they help carry this film and keep us engaged in the story, and seeing how well they all play off one another factors into why this is so entertaining.

Just about the entire film takes place at the mill, and even at a slim 89 minutes, that much time in a single location can be a drag for some.  Personally I love films that take place in single locations, and it’s Dunham’s direction that keeps this film looking and feeling fresh from one scene to the next with some simple but dynamic cinematography.  For instance, he has one interrogation in a brightly lit room that appears wide and spacious, then he shifts gears and takes us to another interrogation where it’s significantly smaller and darker, though both scenes are equal in their intensity.  What I liked most about the style of the film was that the camera managed to always be like the extra man in the room, where we really feel like an observer with Gannon as he is attempting to figure the situation out.  This isn’t so easy to pull off, especially in a time where camera work tends to be more handheld; plenty of the shots here are locked off.

There is simply so much to like about this film, I’m already eager to sit down and watch this again now that I know how it all ends.  This may not have been a splash at the box office; I’m not even sure if it ever played in theaters outside of it having a festival run, but this movie deserves to be seen and gushed about among fellow film geeks.

The Standoff at Sparrow Creek is presented in the aspect ratio 2.40:1.  The 1080p image is arrived at with an AVC MPEG-4 codec at an average of 28 mbps.  Considering most of the film is shot in low-light areas, the picture and presentation is well done.  The black levels and separation are done well, though I wish this had been done on film just to add some grain, but that’s just a personal preference.  Most of the lighting is done with yellow fluorescents, so it does give a warm tone and allow for some natural flesh tones.  In the first act when all the actors share the room together it is a bit dark, and at times it can be hard to follow who is who, but this really doesn’t affect the story all that much, considering I feel this was done to keep us as in the dark on the characters as Gannon is.

The DTS Master Audio 5.1 track isn’t filled with a pulse-pounding bass or a dynamic sound design considering this is a more dialog-driven film, but that doesn’t mean it’s not a well done track.  The dialog is clean and clear while mostly coming from the front end.  Where the surround gets utilized a bit more is at the start of the film with the distant gunfire, but there are some intense moments over the course of the film where “outside” sounds do build the suspense.

The Making of The Standoff at Sparrow Creek: (10:45) A far too brief collection of interviews and BTS footage of the film.  I wish there was more; would have loved a commentary here.

Every year a film comes along that I didn’t expect, and it just reminds me why I love film.  I’m not talking about the blockbuster films with the studios throwing millions into their marketing plan, but the little movies that as a film geek when you see them you just can’t wait to tell your friends about.  For me The Standoff at Sparrow Creek is that awesome little movie I want everyone to see and appreciate.  Yeah, it may not be a knee-slapper in the joke department, but if you want a movie filled with tension and bite, this is the movie for you.

Brent Lorentson is a horror writer and film critic based out of Tampa, Florida. With a BA in Digital Film, he co-wrote and co-directed Scavenger Hunt. His short stories have appeared in various horror anthologies. In 2019 his short script Fertile Blood will be a part of the anthology horror film Slumber Party. He is currently working on his first novel A Dark and Secret Place set to be released in late 2019. Favorite Films: Taxi Driver, Fight Club, I Saw the Devil, The Wild Bunch, Dawn of the Dead, A Clockwork Orange, Pulp Fiction, Heathers, The Monster Squad, and High Fidelity.
Creed II (UHD Blu-ray) (4K) Captain Marvel