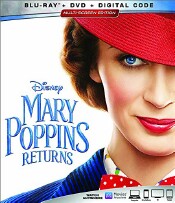 “Everything is possible…even the impossible.”

To be clear, the fact that Disney has delivered a big-budget, star-studded follow-up to one of the most beloved family films in its staggering catalog is *exceedingly* possible. This is, after all, the age of reboots and live–action remakes of movies we already love. What seems impossible is that Mary Poppins Returns and its sensational leading lady both live up to and (re)capture the spirit of the Walt Disney-produced Julie Andrews classic from more than 50 years ago!

“One thing you should know about Mary Poppins…she never explains anything.”

Uncle Walt himself was heavily involved in the making of the 1964 original, and he had a heck of a time convincing author P.L. Travers to entrust him with bringing the writer’s flying nanny to the big screen via a bright musical fantasy. (The struggle was chronicled in 2013’s Saving Mr. Banks.) You know the rest: Mary Poppins became a classic movie musical, and it made Julie Andrews a movie star. So even though Disney can break the internet by dropping a carbon-copy trailer for its live-action remake of The Lion King (my favorite animated film of all time), it’s obvious that Mary Poppins means a lot to Disney. You can understand why they took their time with this one. (54 years has got to be one of the largest gaps between an original movie and a sequel that both share at least one cast member.)

While the first Mary Poppins was set in early 1900s Edwardian London, the sequel moves the action forward to “The Great Slump” of the 1930s. Michael and Jane Banks, the precocious children from the original film, are now grown with adult responsibilities of their own. Michael (Ben Whishaw) is a widower with three children — John (Nathanael Saleh), Annabel (Pixie Davies), and Georgie (Joel Dawson) — while Jane (Emily Mortimer) is a labor organizer who helps Michael with the kids as they try to preserve their family home.

Unfortunately, Michael has fallen behind on some payments, and the house on Cherry Tree Lane is about to be repossessed by the bank where his father used to work, which is currently run by William “Weatherall” Wilkins (Colin Firth). Unless Michael can locate the bank shares that his father left behind, he and Jane will lose the iconic family home. But when the situation is at its most dire, a familiar face returns to the Banks home to put things in perspective for Michael and the children…and bring some much-needed magic back in their lives.

“May I say, you look lovely as always.”

I don’t envy Emily Blunt having to wield Julie Andrews’ iconic umbrella on the big screen. And although the actress was never going to match Andrews’ once-in-a-lifetime vocal prowess, Blunt is an equally grand and commanding presence in this sequel. It’s a winningly tart portrayal, and she plays Poppins as the smartest, most sensible person in the room; her true superpower isn’t flying; it’s common sense. Mary Poppins Returns is also the first big starring role for Lin-Manuel Miranda, the genius behind Broadway smashes like Hamilton and In the Heights. Miranda plays Jack the Lamplighter, the platonic stand-in for Dick Van Dyke’s chimney sweep Bert from the first film and an ally of Mary Poppins.

This sequel nods to the original Mary Poppins in both overt and subliminal ways. Casting the Puerto Rican Miranda and having him do a cockney accent is an example of the latter, since Van Dyke’s cockney accent is considered, um, polarizing. Miranda proves to be a welcome and affable presence on the big screen; not surprisingly, he’s asked to carry a good deal of the musical burden. He opens the film with the lovely tune, “(Underneath the) Lovely London Sky”, but the movie’s showstopping number is the lamplighter anthem “Trip a Little Light Fantastic,” an obvious homage to Step In Time.

If there’s one place where this sequel unequivocally pales in comparison to the original, it’s with the songs. But that’s actually less of a knock against composer Marc Shaiman — who has come up with a delightful collection of tunes — and much more of a tribute to the enduring power of the songs Robert and Richard Sherman wrote for the first film. (There’s not a single song here that can touch “Supercalifragilisticexpialidocious”…or “A Spoonful of Sugar”…or “Chim Chim Cher-ee”… (you get the idea).

The director here is Rob Marshall, who has become the go-to guy for glitzy big-screen musicals after making Chicago, Nine, and Disney’s Into the Woods. Marshall and his team help bolster a lot of the new film’s songs with incredibly imaginative sequences that enliven bath time and (best of all) features the main characters diving into a cracked ceramic bowl. (I loved seeing books and stories come to life in “A Cover is Not the Book.”) Most impressive of all is the use of special effects here. The mix of live action and animation in the first Mary Poppins was completely groundbreaking; obviously, 2018 audiences are a lot more spoiled when it comes to visual effects, but this sequel still manages to dazzle by staying true to the textured look and feel of the original. (This is in stark contrast to something like the recent sterile-looking Beauty and the Beast remake.)

The sequel clocks in at 130 minutes, which is actually about 10 minutes shorter than the original. That being said, this follow-up is still somewhat overstuffed. Meryl Streep pops up for a fun extended cameo as a kooky cousin of Mary Poppins, but her song probably could’ve been excised without affecting the story. Speaking of Beauty and the Beast, it’s wonderful seeing Angela Lansbury lending her talents to another Disney project, but the legendary actress feels a little shoehorned into the movie. Yet both those performances are completely delightful, as is Colin Firth; the actor seems to have grown a mustache for this movie just so he could twirl it.

Mary Poppins Returns is presented in its original aspect ratio of 2.39:1. The 1080p image is arrived at with an AVC MPEG-4 codec at an average 35 mbps. The high-definition image presentation is a perfect companion piece to the original film. While the atmosphere is going to be so much better in UHD side by side with the original film, you’re going to be blown away with how close they got the look. There are some almost ultra-brites during the extended animation sequence that really could have used a bump from HDR. Black levels are pretty solid with nice fog textures and pretty good shadow definition throughout.

The DTS-HD Master Audio 7.1 is best enjoyed with the wonderful songs that capture a lot of the feeling of the ones supplied by the Sherman Brothers back in the original. Dialog cuts through perfectly with a little accent from the subs. The surrounds perk up in scenes that are magical in nature giving the whole atmosphere a somewhat more lively tone. When the papers are sorting themselves, you hear the crisp pages surround you. It’s all very subtle, and the film is created in such a way to allow the music to flourish.

Deleted Scenes: There are only two with a play-all option. Each is under a minute in length.

Back To Cherry Tree Lane – Dick Van Dyke Returns: (5:22) There’s no secret that the short scene with Dick Van Dyke so perfectly finishes the bridge between these two films. At 90, he still quite spry. Yes, the dancing is all him. We get to look behind the scenes on his moment and join him as he visits the sets and gets taken back in time.

Seeing Things From A Different Point Of View – The Musical Numbers Of Mary Poppins Returns: You can select from four of the film’s music numbers and go behind the scenes to see how they were crafted.

Deleted Song – The Anthropomorphic Zoo: (5:04) This was to be in place of where The Royal Douton Music Hall now resides. It’s a demo recording put to storyboards.

The Perfectly Perfect Making Of Mary Poppins Returns: (23:38) Cast and crew offer some respectful thoughts on the original film and then let that inspiration guide their work here. We see choreography rehearsals, recording sessions for the orchestra, and set construction.

Again, these are minor quibbles for a movie that absolutely exceeded my expectations. As a sequel to a beloved musical and as an update to classic film from a bygone era, Mary Poppins Returns is “practically perfect in every way”.

Parts of this review were taken from our Reel World review of the film.

Gino Sassani is a member of the Southeastern Film Critic's Association (SEFCA). He is a film and television critic based in Tampa, Florida. He's also the Senior Editor here at Upcomingdiscs. Gino started reviewing films in the early 1990's as a segment of his local television show Focus. He's an award-winning recording artist for Omega Records. Gino is currently working on his 8th album Merchants & Mercenaries. Gino took over Upcomingdiscs Dec 1, 2008. He works out of a home theater he calls The Reel World. Favorite films: The Godfather, The Godfather Part II, The Body Snatcher (Val Lewton film with Karloff and Lugosi, not the pod people film), Unforgiven, Gladiator, The Lion King, Jaws, Son Of Frankenstein, The Good, The Bad And The Ugly, and Monsters, Inc.
Mortal Engines (UHD Blu-ray (4K) Cult Epics Wrap Up: Blue Movie & Nekromantik 2