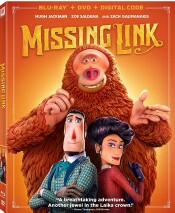 I thought Nalyce would be all about this animated movie, but it only managed to hold her interest for about forty minutes. After that, she was off playing with her toys without a care in the world. So that obviously means that Missing Link does not get the Nalyce stamp of approval. I remained more discerning than my daughter and continued to do my due diligence of sticking it out to the end. I’m glad I did; Missing Link does get my seal of approval. From the creators of Kubo and the Two Strings comes this new family-friendly film full of adventure and friendship. The story does drag a bit in the beginning, but it gets more interesting as things go on. Though there a couple of adult themes that I was not expecting at first, I would style characterize this as a film that the family can enjoy together, just not my family.

Sir Lionel Frost (Hugh Jackman) is an adventurer determined to take his place amongst a society of distinguished gentlemen. However, given his adventures to discover mythical creatures usually yield no irrefutable proof, he is considered a mockery and not granted access to the level of status he desperately seeks. After his latest adventure proves as fruitless as the others, he receives a letter revealing the existence of another fabled creature known as Sasquatch. His peers immediately disregard his claims as false, especially Lord Piggot-Dunceby (Stephen Fry), Sir Frost’s biggest detractor. A wager between the two men is struck: if Sir Frost can bring back proof of the creature’s existence, he will be granted access into the society of “great men.” As Sir Frost begins his journey, Lord Piggot Dunceby plots to rid himself of Sir Frost altogether.

Arriving in the Pacific Northwest, Sir Frost rather quickly discovers the creature that he is looking for. The creature is revealed to be not the savage as previously suspected and actually quite gentle. Additionally, the creature can speak English, as well as being revealed to be the one who wrote the letter that brought Sir Frost. Lonely, the creature, eventually adopting the name Susan (Zach Galifianakis), seeks Sir Frost’s help to travel to the Himalayas to reunite with the Yetis, believed to be distant cousins of the Sasquatch. Identifying with Susan’s need for acceptance, the two strike a bargain: Sir Frost will help Susan get to the Himalayas, and in exchange the Susan will provide Sir Frost with all the proof he requires (hair, toenails, feces; they never really decided on which one). Their adventure will be rife with danger from the scheming Lord Piggot-Dunceby, as well as a woman from Sir Frost’s past (Zoe Saldana).

The visuals are the stop-motion film’s biggest triumph. It’s impossible not to enjoy the colorfulness of the film, which is a nice change of pace from the dark tone of other films like Kubo. This gave the film an air of wistfulness and made the entire experience more uplifting, by far my favorite aspect of the film. Though the story was predictable in some areas, the warm setting allowed me to remain engaged in the story. I wish I could say the same for my daughter, but hey, you can’t win over everybody.

I expected there to be more weariness during the first encounter between Sir Frost and Susan. Sir Frost’s acceptance that this creature could talk and partnering with it came too easily. There needed to be more amazement and shock in order to make the scene more authentic. I understand there may have been a need to further the plot, but from a realistic standpoint of an audience member, there should have least been a pause or jaw-drop. My seven-year-old was surprised that the creature could talk, but before she could even fully digest this fact, we were off to the next scene. Another thing, this film addresses some themes that are usually glossed over in animated films, such as premeditated murder and cannibalism. Granted, we now live in a society where kids are learning about these matters at an accelerated rate, but as parent I feel obligated to bring that to the attention of fellow parents. To the film’s defense, it isn’t hardcore or gory; it’s just the casual manner in which murder was decided upon caught me off guard.

Missing Link is presented in its original aspect ratio of 2.39:1. The 1080p image is arrived at with an AVC MPEG-4 codec at an average 30-35 mbps. I have to admit I’m a sucker for stop-motion films. It’s an art that isn’t appreciated as much today as it was when the master Ray Harryhausen was delivering us to other worlds long before Hollywood was creating their f/x in a computer. Missing Link combines stop-motion with computer-generated technology to add more to the production without giving up the magic of filming one frame at a time, 24 times for every second of final movie. There’s a substance to those puppets that isn’t there in a creation of ones and zeros. There’s heart there, and this high definition image presentation does a fine job of delivering those goods. Colors are bright and vivid throughout. Black levels might not be the most impressive I’ve encountered, but there’s enough shadow definition there to allow us to appreciate the art itself even in low-light conditions. The transitions are flawless likely improved because of the computer “assist”. The detail level allows you to appreciate the range of emotion and speech the film provides.

The Atmos track defaults to a pretty lively 7.1 mix. This is actually a very dialog-heavy film, so while there’s a lot of “animation” in this audio presentation, it is there to serve the dialog first and foremost. The surrounds help to build that sense of peril and emergency when called for, particularly ice cracking as our heroes are dangling over an extensive abyss. There’s a nice element of movement in the mix as the ice cracks around the environment. Wind and wildlife sounds are subtle but add another element of immersion into the mix. The score is appropriately whimsical and produced just out of the way of the other elements. Subs don’t really play a huge part here, but there’s just enough bottom to fill out the other aspects of the sound field.

The extras are all rather short and too promotional in nature. Some of the feature titles might take as long to read as it actually takes to watch them.

Creating Mr. Link: (1:23) Concept art and evolution of the f/x layers lead this look at the character design.

Animation Inspiration: (3:43) There’s an optional director’s commentary here. You get some short scenes with boxes that show various stages of f/x completion. Sometimes it’s reversed with the screen showing concept art while the scene plays out in the small box.

Oh What A Mystery – Pulling The Camera Back On Missing Link’s Magic: (2;15) A mouthful for a very short feature that follows the film from story to production, all of it set to a folksy song.

Inside The Magic Of Laika: (2:46) A promotional “trailer” for the animation studio.

Though was anticipating more silliness from Zach Galifianakis, I am pleased with the amount that I got. His character truly was the heart of the film, as he is the character to identify with, and it is his emotions and desires that propel the story forward. This is quite possibly the first film that I did not immediately identify with Hugh Jackman, but the truth is, his character was initially motivated by selfish pursuit and doesn’t have a lot of concern for the well-being of others. It is his dynamic with Galifianakis’s character that softens his character and makes him more likable. I know there was meant to be a chemistry between Jackman and Zoe Saldana’s character, but it is the interactions between Susan and Jackman that are the thing to see in this movie.

Jeremy Butler is a film school graduate of the International Academy of Design and Technology. He is been writing for Upcomingdiscs since 2012; however, movies have played a big part of his life for much longer. Favorite genres include horror, science fiction/fantasy, and comedy. Favorite movies are V for Vendetta, Boondocks Saints, Kiss Kiss Bang Bang, and The Godfather.
Breakthrough (UHD Blu-ray) (4K) Alita: Battle Angel (UHD Blu-ray) (4K)