Posted in: Disc Reviews by Michael Durr on October 26th, 2019 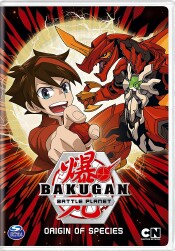 Bakugan was originally a toy first envisioned by an inventor named Aldric Saucier, who thought he could fit a small action figure inside a marble.  He then presented the idea to Spin Masters, who accepted it eagerly, as they were in search of a marble for the 21st century.  Ultimately they sent the idea to Sega Toys in Japan, who came up with the concept to turn it into a game complete with cards and miniatures.  From there it was only a matter of time before Bakugan became a cartoon show as well.  Today, we are reviewing Bakugan: Battle Planet, the newest series to feature these bio-mechanical creations in their animated form.

There are strange events going on on Earth.  A Bakugan battle is about to start, and it could change the fate of the world.  Dan, of the Awesome Ones, has been challenged by the dastardly Magnus, who has unveiled his Bakugan, a two headed dragon named Nillious.  It’s now or never, and will Dan and his Dragonoid stand up to the threat?

We flash back to a simpler time.  It is the twelve-year anniversary of the Great Collision, where strong forces hit the Earth and left giant craters in various locales around the planet.  Dan Kouzo incidentally was born on this day, and his friends Wynton Styles and Lia Venegas are trying to expose the truth behind the mystery.  As it turns out, Wynton and Lia, while recording their video for ViewTube, are using this as a vehicle for a surprise party for Dan’s birthday.

All of the sudden, everything just stops working.  The video camera dies, then their phones die just like the day of the Great Collision.  All of the sudden, it seems the Great Collision has happened again.  The Awesome Ones,  or the three pre-teens, run in fear.  Then they hear a voice that simply says “Bakugan”.  The phones and other electronic devices start to work again, and Dan finds a ball of ectoplasm near him.  He investigates the goo and inside is a robotic red ball.

Giant hexagons appear as if it were forming a battlefield.  Dan throws the ball into the battlefield, and it hits a matching red hexagon.  It changes into the dragon known as Dragonoid.  Wynton and Lia find their balls as well.  They start to play with their balls as they change into Trox (a giant dinosaur) and Gorthion (a large gorilla).  Heck, even their dog Lightning has a Bakugan.  It’s become a worldwide phenom as other kids around the world have their own Bakugans.  But enemies with their own powerful mechanical creatures come out of the woodwork, too, and it becomes a battle to save the planet.

If this sounds like a typical adventure plot for young kids, then you would probably be right at first.  We have the Awesome Ones with the leader who just so happens to be born on the day of the Great Collision.  Then they have their Brawlers, who fight for them where they learn about friendship and trust and all of those other wonderful kid values.  It certainly has its share of hokey moments, like the kids wondering how many views their videos are getting or watching the Brawlers lose hit-points (and it showing up visibly on the screen) during a battle.  The villains also tend to run through every stereotype imaginable in their quest to defeat the Awesome Ones.

But then the story starts to evolve a little bit.  The campy nature of the episodes starts to show a few wrinkles.  We get a new member as the trio takes a stand against bullying.  His name is Shun Kazami, and he has three different Bakugan brawlers.  Soon the other children gain their own secondary and tertiary Bakugans.  We are also introduced to loss as one of the Awesome Ones suffers defeat, and thus their Bakugan goes into the hands of evil.  It’s these topics that actually make the series stand a little different than the typical kiddie fare.

The film is shown in a 1.78:1 widescreen format.  The colors are vibrant enough, and it looks about as good as it is going to look for standard definition.  Despite the limitations of the format, we do get some above-average locales as we progress through the episodes.  But oddly enough, the weakest part of the graphics are the battles themselves.  With the hexagonal battlefield, everything with the exception of the brawlers seems to be reduced to geometric shapes.  I really wish they would have taken the time to animate the battlefield more and maybe suck us into a fantasy world and not take us away from the action.

The audio tracks are  Dolby Digital 2.0.  Subtitles are provided in English SDH.  Unfortunately, outside of the catchy theme song, the audio needs some major help.  The dialog is reasonable enough, and I didn’t have any issues being able to hear the characters and telling them apart.  But between the battles (again) and even when the Awesome Ones are just practicing, it doesn’t do a good job of bringing us the action.  A show like this would really benefit from enhanced audio and some bass to go with it.

No Special Features are provided on the disc.  It’s not the kind of series that lends itself to some meaty extras, but it would have been interesting to hear from the creators in a 15-minute interview or something.

This is season one, volume one of the series.  Season two is in full swing, and the weekly series continues to have viewers in the US, Canada and Japan among other countries in the world.  Everybody wants to see Dan and the Awesome Ones defend the Earth from the evil Bakugan brawlers.  The show is full of adventure cliches, but thankfully every once in a while they try to expand the story repertoire and turn a few interesting corners.  Speaking on a parent level, I couldn’t find any issue for my child not to watch Battle Planet; I’m just not sure it would hold his interest for very long.

Meanwhile, the limitations of DVD really show up in this disc in both the audio and video.  The video is decent with bright vibrant colors in the normal scenes, but the battlefield is limited by their use of geometric shapes rather than lush fantasy worlds.  The audio barely shows up and doesn’t provide the boom to really make this show pop to the audience.  I would have also appreciate an extra feature or two, but I guess when each disc has up to 2 1/2 hours of video, there isn’t really much room for a bonus or two.  If you are a fan of the Bakugan, then you probably have already scooped this up.  Others, such as parents might find this a good diversion from their daily dose of PJ Mask or Paw Patrol.  Enjoy.

Bully For You/ Trolling for Laughs

The Exit/ The Lost and the Cost

Mister Moon/ What’s Up With Dan?

Home on the Run/ Top Slot

Michael Durr has been reviewing movies for the better part of fifteen years now. He primarily enjoys thrillers, sci-fi, animation and even a little courtroom drama. His favorite films include Escape from New York, the Goonies and anything with Alyssa Milano. When he’s not praising Kurt Russell as the greatest actor of our time or scratching his head over a David Lynch flick, he’s spending time at home in Texas with his lovely wife, Lori and his amazing son. How they put up with him is a mystery, but even Basil Rathbone doesn’t have the time to solve that one.
“31 Nights Of Terror” Contest: Win Abbott & Costello Meet Frankenstein “31 Nights Of Terror” Exclusive Interview With Sara Karloff