Posted in: Disc Reviews by Brent Lorentson on January 8th, 2020 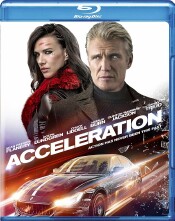 When it comes to B action films, there is a threshold for what your expectations should be for the film.  In the grindhouse era there were some pretty good quality action films, but as the sub-genre stretched into the 80’s and 90’s, the quality just got worse, though they’d always find some star whose celebrity was on the verge of fading.  Dolph Lundgren has managed to hang in there and continue to get roles even though it’s been more than a couple decades since he last had the top billing for a Hollywood blockbuster.  Personally I’ve always liked the guy; he can still be a charming badass or also play the heavy when need be for a film. Sure, he’s aged, but I can still believe he’d have no trouble kicking some onscreen ass.  The one thing that the filmmakers of Acceleration got right was to cast Lundgren in their film where we get to see him play the good guy as well as the bad guy.  As for the rest of the film, well, they had a good idea and a nice lineup of B-movie action stars as well as former UFC fighters, but the result falls well short of its potential.

One of the biggest mistakes this film makes is having an opening that makes little to no sense to the viewer as we are seeing Vladik (Lundgren) and Rhona (Natalie Burn) gearing up to kick some ass.  The film then backpedals eight hours to where Rhona is having to go on these five mini-missions while Vladik is watches her from the privacy of a room filled with monitors; to watch Rhona, he has a camera in her car.  Basically this film has no concept of three-act structure and has decided viewers don’t need to have characters set up or plot set up; they just throw us into the action.  It takes a while till we learn Rhona’s son has been kidnapped, and the only way to get him back alive is to complete these five tasks in the span of eight hours.  Then there is the side plot of Kane (Sean Patrick Flanery), who is the big crime boss who is trying to figure out who has stolen from him.  The threads connecting all this together are thin, and despite how hard they try to make Kane seem like a menacing threat, it’s just hard to take him seriously because of his actions.  An example of his menacing actions … sexual innuendo involving pie at a café where he randomly runs into Rhona … then there is a terrible scene that seems to want to recreate the tension of the Russian roulette game in The Deer Hunter.  I don’t blame Flanery for this, because his performance is one of the things that saves this character, but it’s the situations the character is put into where I could never believe he was a successful crime boss.

If I ignore the thin plot and just focus on the action beats, then I can say the film isn’t bad for being a B-movie.  It’s a smart move to have former UFC fighters and established action stars filling in the roles for Rhona to square off with. In a way, this is part of what makes this film fun.  What could have helped the film is to have thrown in more fights. Let’s see these fighters brawl. I don’t want to see them getting into over-the-top, wannabe John Woo gunfights.  Speaking of ripping off styles, I feel like the directors spent a weekend watching all the films and shows of Nicolas Winding Refn and decided they want their film to look like a bad knockoff from him.  The overuse of the neon blues, reds, and yellows is just poorly executed, and it doesn’t help build atmosphere whatsoever.  What it comes down to is the film is so focused on style and trying to look cool that it lost its way in the process.  I feel like there is a gritty and darker film here, and it could have been so much better if they simply toned down the shootouts and focused more on developing the characters.  If they simply would have shown Rhona’s kid being kidnapped, given us some drama, and fleshed out her relationship with her kid, then at least we could have been invested, but apparently caring about these characters wasn’t a concern for those involved.

Acceleration is presented in the aspect ratio 1.78:1.  The 1080p image is arrived at with an AVC MPEG-4 codec at an average of 20 mbps.  The look of the film has a very superficial appeal that has worked for films like John Wick and Only God Forgives, where we see heavy neon blues, reds, and purples to light the sources, but it just doesn’t belong with this film.  Another issue with the lighting is the overabundance of lens flares. Here it’s excessive to the point JJ Abrams would say they overdid it.  There is a bit of haze to the film at times, while oftentimes the image will be sharp and allow for some detail, but the detail drops off when it comes to the surrounding image.  There is a bit of separation in the depth of the black levels, but the image does get a bit murky.  There were no artifacts that I could see with the transfer.

The DTS HD-Master Audio 5.1 track is the most impressive aspect of this presentation.  From the gunfire to the impact thuds from the fight scenes, the subwoofer gets its share of work.  The dialog is clear throughout with a problem-free track.

This is one of those action films you’re going to want to check out after you’ve had a drink or two and just want to enjoy seeing Dolph Lundgren and some mindless action.  This isn’t a film that attempts to set the bar too high, but for what it is, it does manage to entertain for its 85-minute running time.

Brent Lorentson is a horror writer and film critic based out of Tampa, Florida. With a BA in Digital Film, he co-wrote and co-directed Scavenger Hunt. His short stories have appeared in various horror anthologies. In 2019 his short script Fertile Blood will be a part of the anthology horror film Slumber Party. He is currently working on his first novel A Dark and Secret Place set to be released in late 2019. Favorite Films: Taxi Driver, Fight Club, I Saw the Devil, The Wild Bunch, Dawn of the Dead, A Clockwork Orange, Pulp Fiction, Heathers, The Monster Squad, and High Fidelity.
Family Guy Season Seventeen Joker (UHD Blu-ray) (4K)