Posted in: Disc Reviews by Brent Lorentson on February 6th, 2020 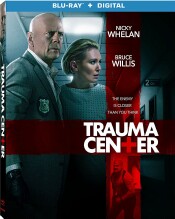 I’ve gotten used to the cinematic disasters Bruce Willis has attached himself to over the past few years.  I’ll admit, I was surprised to see him in Motherless Brooklyn, and after his impressive performance in Glass, I had hoped he was going to attempt to get himself in to some higher caliber films.  Willis has stayed in shape, especially for an action icon who is getting up there in his years, and he still manages to have a presence when he appears on screen.  Sure, I get that we can’t expect him to keep throwing himself out of exploding buildings and having elaborate fight scenes. In a perfect world, I’d love to see him be able to revisit the role of Joe Hallenbeck in a The Last Boy Scout sequel. Heck, while staying on the nostalgia train, I’d be on board with a Hudson Hawk sequel over some of these direct-to-video films he’s been doing.  Getting back to Trauma Center, we have a new direct-to-video action film that features Willis attempting to save a young girl’s life who happened to be at the wrong place at the wrong time. Is the film worth checking out, or is it one you should simply pull the plug on and avoid?

Madison (Nicky Whelan) and her little sister, Emily (Catherine Davis) have relocated to Puerto Rico after their family has been struck with tragedy.  Madison is struggling to do what she can to take care of her sister, but it’s been a bumpy road for the two of them.  Emily also has asthma, which means in cinema terms, at any moment she can die if she’s overly excited.  As it turns out, it’s an asthma attack that lands Emily in the hospital where she needs to stay the night so she can be monitored.  While this family drama is going on, there are a pair of corrupt vice cops who are trying to locate a snitch who has evidence on him that could put the two away.  This introduces Lt. Wakes (Willis), who is asked to check in on the informant and ends up discovering the dead body of the informant.

Madison finds herself in the crosshairs of these dirty cops when they believe she has come into possession of the evidence that can help convict the dirty cops.  It’s a stray bullet that grazes Madison and lands her in the hospital, and it’s Lt. Wakes who puts her under police protection while he attempts to figure out the case on his own.  Thankfully the film doesn’t drag and keeps the story moving, as it doesn’t take long before Madison finds herself in a cat-and-mouse game with the dirty cops as she limps around trying to keep herself hidden in an abandoned portion of the hospital.  It’s a bit too convenient for the story that Madison would be stuck in a portion of the hospital where NO ONE seems to be, but for some reason a janitor doing laundry seems to be busy on this floor.  What’s even more frustrating is how easily these officers seem to navigate their way towards the closed portion of the hospital but are suddenly inept when Madison is virtually hiding right next to them.  Sure, it’s something we’ve seen dozens of times in a variety of films, but there is never a sense of tension built in these moments. A good portion of this film is meant to be suspenseful, but it never quite hits the mark.  Then there is a moment that I’ll simply fault for bad editing where it seems the dirty cops have found her and are looking right at her hiding spot, only to see in the next shot they were looking elsewhere.  Sure, we’ve seen this where it’s like a false reveal, but the way it plays out here it just seems like a bad cut.

As for what Bruce Willis has to do with this movie, mostly he is wasted on filler material attempting to discover who the bad cops are as the plot seems to wander into territory that makes mo logical sense aside from adding padding to the plot.  Sure, cutting out Willis would hurt the star power for the film and cut an 87-minute film to at most like a 60-minute short, but it wouldn’t feel so forced.  While I wouldn’t say the film is a disaster, it’s a far cry from being a claustrophobic masterpiece.

Trauma Center is presented in the aspect ratio 2.39:1.  The 1080p image is arrived at with an AVC MPEG-4 codec at an average of 30 mbps.  Considering the film was shot on location in Puerto Rico, more of the exteriors should have been utilized to help add some visual flair to the film.  A good portion of what we do see are exterior shots in alleyways at night.  There is plenty of detail captured in these exteriors, though really no one wants to see the detail of dumpsters or poorly lit alleyways.  As for the interiors of the hospital, there is a dull yellow/green from the lighting that manages to make everyone’s skin tones seem a bit off.  While there are no compression issues, the film seems to be a bit dull when it comes to its color palette; this fits for the interior location and the tone of the hospital, but it just left me wondering why make a big deal of shooting in Puerto Rico and for plot purposes have it take place there, but nothing whatsoever makes the visuals unique to its setting.

The DTS HD-Master Audio 5.1 track is well done. What’s more impressive is in the films quieter moments when Madison is having to be quiet in the hospital while avoiding her pursuers and the sound design helps give us a sense of distance of where they are.  There is a nice use of ambient noise at times, but it’s not always consistent.  The dialog is clean and clear throughout.

There was some potential in this film, but it never quite delivers what it could have been.  For Bruce Willis fans, you might be let down to know he’s more of a supporting character, where the film’s focus is mostly on Nicky Whelan’s character.  It’s not a bad film, but it’s not something I’d rush out to see.

Brent Lorentson is a horror writer and film critic based out of Tampa, Florida. With a BA in Digital Film, he co-wrote and co-directed Scavenger Hunt. His short stories have appeared in various horror anthologies. In 2019 his short script Fertile Blood will be a part of the anthology horror film Slumber Party. He is currently working on his first novel A Dark and Secret Place set to be released in late 2019. Favorite Films: Taxi Driver, Fight Club, I Saw the Devil, The Wild Bunch, Dawn of the Dead, A Clockwork Orange, Pulp Fiction, Heathers, The Monster Squad, and High Fidelity.
The Addams Family (2019) (Blu-ray) Summer Days with Coo (Blu-Ray)