Posted in: Disc Reviews by Jeremy Butler on February 1st, 2020 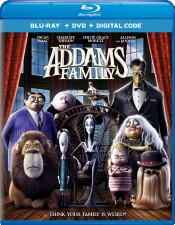 That is for those who read my Addams Family double feature post regarding the Addams Family theme song. Of course that is merely the first verse of the song. Have no fear, as the animated film features the full version. It must be kismet, as I had the privilege of reviewing the animated film so soon after reviewing the double feature, though I suspect that this was by design. Though this cartoon does not fit the traditional view of what a horror film is, I would argue that the subject matter is more than enough to grant it entry. Featuring a lighter tone than its subject material, this incarnation is an enjoyable experience that can be shared with the whole family, which was my experience as I was able to bring my daughter to the film with me, and I’m happy to say it got her stamp of approval.

During their wedding ceremony, Gomez and Morticia are chased out of their home town by an angry mob due to their macabre nature. Desperate to find their own place in the word, a vehicle-pedestrian accident provides them with a new home in the form of an abandoned mental asylum and manservant in the form of the man they hit (Lurch). The surrounding marsh conceals the asylum from the world, shielding the couple from the rest of the world for years to come. During this time, the couple settles down and welcomes two kids, Wednesday and Pugsley.

Thirteen years later, design expert and reality television host Margaux Needler has transformed the marsh into perfect planned community called “Assimilation”. With the marsh gone, so goes the mist that concealed the Addams family from the rest of the world. This revelation comes as a shock to Margaux as well as Morticia, who begins to fear the potential to be persecuted again. She is right to fear, as Margaux will do anything to be rid of the peculiar family that threatens her perfect society.

So let’s start with Nalyce. I’ve already told you that the film got her stamp of approval, but let’s go into details. Now I must tell you that my daughter has the gift of gab, but when it came to getting her to describe what she enjoyed about the movie, it was like getting blood from the stone. I think I may be dealing with my own little Wednesday. Speaking of Wednesday, that was her favorite character (and mine). I thought that I would be hard pressed to find someone in this role that I liked more than Christina Ricci, but I do believe that Chloe Grace Moretz was on par with Ricci’s performance. I will give a slight edge to Ricci as she both looked and sounded the part, while Moretz merely lent her voice to this production. Not knocking Moretz’s performance, as I cannot imagine anyone would be able to hit the cadence and tenor of the character like she did. Additionally, her character was the most quick-witted and hilarious, especially when characterizing what would be her family’s survival without her intervention. When she confronted the bully at the junior high school, her low voice was chilling and at the same time hilarious.

Back on the topic of Nalyce. As I mentioned, Wednesday was her favorite character, but mainly because somehow in a family of peculiar individuals, she managed to be more peculiar than the rest. While the rest of her family is happy to keep to themselves, she yearns to take part in this newly discovered world, which inevitably makes her the outcast in a family full of outcasts. This is me attempting to flush out my daughter’s explanation of “she’s different from the others.” I will say that when Wednesday came home and performed the song about being like everyone else to her mother’s utter horror, I haven’t seen my daughter laugh that hard in a long while.

Now not every character was a hit; there was one that I felt was diminished from his previous glory. That would be Uncle Fester. Lloyd’s interpretation of the character had depth, especially in the first film, but here Fester is downgraded to a supporting character who is predominately annoying and serves no real purpose to the overall story. For years, people have lobbied for Oscar Isaac to take on the role of Gomez, and now that the people have their wish, how was he? I would say that he was great in the opening of the film, and he starts to come alive again towards the film’s climax, I do not believe that the subplot involving him and Pugsley got the attention that it should have. In my opinion, this would have been a good plot for the sequel.

The Adams Family (2019) is presented in its original aspect ratio of 1.85:1. The 1080p image is arrived at with an AVC MPEG-4 codec at an average 30-35 mbps. The high-definition image presentation is a nice example of contrast. Throughout much of the film the Addams ladies are almost monochromatic with a hint of red for lips or nails. At one point Wednesday sports a bright pink outfit in rebellion. You have to understand that pink is a gateway color, at least according to Mom. But it does offer more of that contrast this world has been known for from the original strips through television and movies. There’s the dank, dark world of the family, and then there’s the bright colorful world that the rest of us live in. There are some moments of nice texture. When Pugsley’s mustache falls apart, there’s a wonderful moment when the hairs are scattered on his chest. It’s a pretty solid moment of detail and texture. Black levels are fairly good, giving us some workable shadow definition. The entire presentation suffers from some uneven edging issues.

The DTS-HD Master Audio 7.1 allows the audio presentation to spring alive in spots. There are moments where we get some immersive boost from the subs. It fills out some of the voices and lends weight to the two moments both at the film’s beginning and climax where the “villagers” are attacking the family’s home. You get convincing subs that pull these moments above the usual computer-animated-feature scale. Dialog cuts through with the kind of nuance necessary for the spooky and kooky cast of characters. There are some pipe organ moments that use both the subs and mains to convincingly fill your theatre space.

Deleted and Extended Scenes (06:15): Four deleted scenes that were cut from the final film at several different stages of production. This is evident by the fact some are still in storyboard or layout stages.

Charades with Thing (03:32): This was quite possibly the most entertaining and enjoyable feature. It is one that you can do with the whole family and make a competition out of it.

Life of A Scene (03:22): A intriguing behind-the-scenes that takes us through the four stages of the animation process, providing a detailed voiceover and illustration of each process. My wife’s favorite featurette.

Welcome to the Family (06:02): An in-depth behind-the-scenes featurette that introducing the characters, the setting, and inspirations courtesy of the cast and directors.

Addams Family Throwback (01:05): A super-brief introduction into the original series. Like blink your eye and its over; I could honestly see this being a promotional commercial for the film.

“Haunted Heart” Lyric Video: Is that Christina Aguilera? I believe it is. Good song that greatly frames the movie. Definitely worth a listen.

“My Family” Lyric Video (01:05): Another lyric video, but just a snippet courtesy of Migos, KAROL G, and Snoop Dogg.

From my perspective, this movie is predominantly about the relationship between Wednesday and Morticia, and how it mirrors another mother-daughter dynamic in the film. Despite this imbalance in plots, the film is wildly entertaining and breathes new life into the series with the help of Oscar Isaacs, Charlize Theron, Chole Grace Moretz, and Allison Janney. It is also worth mentioning that Snoop Dogg played a character, though it won’t be immediately apparent who, but in the end Itt (pun intended) is very clear which one he is.

Jeremy Butler is a film school graduate of the International Academy of Design and Technology. He is been writing for Upcomingdiscs since 2012; however, movies have played a big part of his life for much longer. Favorite genres include horror, science fiction/fantasy, and comedy. Favorite movies are V for Vendetta, Boondocks Saints, Kiss Kiss Bang Bang, and The Godfather.
Motherless Brooklyn (Blu-ray) Trauma Center (Blu-ray)