Posted in: Disc Reviews by John Delia on February 26th, 2020 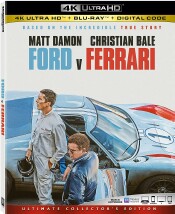 “There’s a point at 7,000 RPM… where everything fades. The machine becomes weightless. Just disappears. And all that’s left is a body moving through space and time. 7,000 RPM. That’s where you meet it. You feel it coming. It creeps up on you, close in your ear. Asks you a question. The only question that matters. Who are you?”

The film is based on the competition created between Ford and Ferrari during the years from 1959 till 1969, and is centered on the 24 hours of Le Mans race. The 24 hours of Le Mans, started in 1923, is a car race in France that occurs during the month of June and consists of part permanent track and part public roads. After Carroll Shelby (Matt Damon) won the 1959 Le Mans race, becoming the second American to ever win the race, he retired from racing. He then begins to invest in all types of cars and forms his own racing team. He also starts a sports car dealership with his friend and mechanic, Phil Remington (Ray McKinnon). Carroll has always been intrigued with fellow racer Ken Miles (Christian Bale) because of his determination to always find a way to win, which creates an interesting friendship.

With Ford’s stock dropping, Henry Ford II (Tracy Letts), president and CEO of Ford Motor Company, wants to find a way to improve Ford’s image in the eyes of every American, so he challenges all of his employees to come up with an idea. When Lee Iacocca (Jon Bernthal), an executive, comes up with an idea to attempt a merger with Ferrari, things begin looking up.

Determined to find a way to get the Ford Motor Company to become one of the top automobile makers, Henry turns to Lee to set up the next steps. When the idea to race at Le Mans comes up, Leo Beebe (Josh Lucas), another executive, is totally against it. Carroll then is approached about designing a car and racing it in the endurance racing circuit, and he turns to Ken to help him to accomplish his idea and then race the car. Ken’s wife, Mollie Miles (Caitriona Balfe), and his son, Peter Miles (Noah Jupe) have been there for him throughout his racing career, but when times start to get hard, they all have to pull together to support each other through this new risky opportunity.

Director James Mangold does a very good job recreating the events that molded racing enthusiasts’ involvement in endurance racing. He puts together exciting action scenes that put you in the car with the driver as if you are actually on the track. The view he gives you is similar to what they show in American stock car racing on television. Mangold does an excellent job of putting together a storyline based on actual events and staying close to the true story as possible. He includes great cinematography in how he displays the tracks, locations, and actual racing moments throughout the film. Most of all he works with the acting in the film to give it a look of reality in the story.

This very imaginative action flick will keep you glued to the world of endurance racing and definitely will entertain racing fans and novice future drivers throughout. If you like racing, and enjoy well-crafted drama featuring the car makers and the most reckless speed demons in a world, then this film is for you.

Ford vs. Ferrari is presented in its original aspect ratio of 2.39:1. The ultra-high-definition 2160p  image is arrived at by an HEVC codec with an impressive average bitrate of 55 mbps. This is a period film, so the colors retain a bit of subdued and desaturated nature. That doesn’t mean the colors can’t pop. The reds are particularly nice and go hand in hand with both racing and Ferrari. The effect was achieved by using a vintage glass filter on the cameras. The source was shot with a digital 4K master and used a somewhat standard 2K intermediate for the final transfer, which makes this something of an upconvert, but the source resolution and the UHD offer some finer elements of texture and detail. I found this particularly true of the racetrack road surfaces, and surprisingly enough, the tires themselves. Black levels are above average, but the filters create a bit of an unnatural glow which can mess with shadow definition. It’s a rare element in the film and takes little away from the final result.

The Atmos track defaults to a pretty solid 7.1 mix. This is front and foremost a racing film, and that’s where the surrounds come completely alive. You don’t just hear cars behind you. You can’t just hear the cars you pass or are being passed by you. You absolutely feel the race. You’re right there in the driver’s seat with the sounds of wind shear and racing engines to keep you fully immersed in the film. The subs are quite as impressive, as I was expecting, but they do help fill up the depth of the audio presentation. Dialog cuts through cleanly, and everything is superbly placed.

Bringing the Rivalry to Life: (59:52) This is an 8-part making-of feature that’s split because of royalty concerns. There is a handy play-all, and the segments take you through the main areas of production including: casting, the real people, storytelling, direction and production/audio design. We get the usual insights from cast and crew and even some input from Ken Miles’ son. There’s some pre-viz and plenty of behind-the-scenes production footage.

I based my grade on the remarkable action scenes, energy-filled storyline, and outstanding cinematography.

John Delia has been on all sides of the movie business from publicity, writing for publications and on line blogs, script writing, to film making. Writer, critic, film editor he has worked as a film critic on this second go around for 14 years. He earned his Bachelor’s degree at the college of Journalism and Communications at the University of Florida in Gainesville, Florida. John is an active member of the Southeastern Film Critics Association (SEFCA) . Favorite Films: Lord of the Rings/Hobbit trilogies, The Godfather trilogy, the Indiana Jones trilogy (I didn't like the 4th), The Avengers and for TV it's Game of Thrones. As for animation it's a tie between anything Pixar and everything Hayao Miyazaki.
Snatchers (Blu-ray) Frozen II (UHD Blu-ray) (4K)