Posted in: Disc Reviews by Gino Sassani on February 29th, 2020 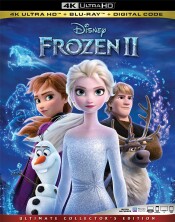 It’s been six years since Frozen became somewhat of a surprise hit out of Walt Disney Studios in 2013. No one was surprised it made a good haul at the box office, but I suspect that even the masterminds at Disney never saw this billion-dollar baby when it was first being born. It’s become the biggest original hit out of Disney since the original Lion King set animated feature records in the 90’s. I’ll give the studio credit. They didn’t rush out and try to cash in on the momentum as quickly as other studios would have. They took their time and assembled the same team of directors and songwriters and allowed the process to follow a six-year process with the intent of doing it right rather than doing it fast. For the most part I think that strategy paid off, and while this film will never be the classic the original has become, it will fit rather snugly into the franchise and will delight children, while possibly cursing the adults who are fated to watch the film over and over again. This is absolutely one of those kinds of movies.

It all starts in the past where we spy young Elsa and Anna playfully getting ready for bed. The King puts them to bed with a story out of the kingdom’s past. He regales them with how their grandfather met the people of an enchanted forest who had magical powers over the four elements of land, fire, air and water. They are told of the great gift of peace their grandfather gave these people in the form of a huge dam. It all turns nasty when the story continues to tell of a peaceful gathering where the people of the enchanted forest suddenly attack the people of Arendelle. The elements were so angered by the act of betrayal that they separated the kingdoms and enshrouded the enchanted forest with an impenetrable fog that has isolated the forest ever since.

Jump to the present time, and we see the “royal” family of Anna (Bell), Elsa (Menzel), Olaf (Gad), and Kristoff (Groff) living a happy life where they play charades and dance away the nights. Kristoff is looking for the chance to propose to Anna but can’t quite find the right moment. Olaf now has a magical permafrost shell that keeps him from melting, and now he can share warm hugs, which become the subject of a whimsical song. But Elsa is hearing a voice that no one else can hear. It’s calling her somewhere, and she can’t fight the draw of its spell. She believes it may help her find the secret of her powers, and of course, we get the Let It Go of this film as Elsa sings about the Unknown.

The story becomes one of those be-careful-what-you-wish-for, because the adventure that follows shows the family that the story they were told as children isn’t true, and that it was her grandfather who betrayed the people of the enchanted forest. Now they must risk their own lives to undo the great injustice, and the act may risk the very survival of Arendelle itself. Along the way there are massive rock creatures, a horse made of enchanted water, a cute little fire lizard, and a return of many of the characters that played such small or large parts in the original.

One of the things I like most about this film is that you don’t have to have seen the first to follow the story. There’s even a cute and playful way of delivering the highlights of the first film that will bring a smile if you saw it. Of course, you’ll better understand many of these other characters by watching the first, but it’s not a requirement. You get to know these characters rather quickly, and it’s an easy film to follow even if it is less story and more enchanted events.

The songs live up to the expectations, but there is no standout hit here. If anything, it appeared obvious to me that they were trying too hard to reproduce the power of Let It Go. It just doesn’t happen, and I have to ask myself if these songs could have been better if it weren’t so obvious how hard they were trying. As an award-wining songwriter myself, I can tell you that the songs I’ve worked hardest on tend to be the ones that don’t end up measuring up. My best stuff always came rather quickly and with almost no effort. There’s a ton of effort here, and maybe there was too much.

The animation has come a long way since the first Frozen movie. I was completely captivated by the environments. There’s a scene of rushing water from a broken dam, and it is simply breathtaking. The wonderful contours of water there, and water creations like the horse are milestones in the art, to be sure.

Frozen II is presented in its original aspect ratio of 2.39:1. The ultra-high-definition 2160p  image is arrived at by an HEVC codec with an impressive average bitrate of 65-70 mbps. Of course there’s going to be quite a splash of color. But that’s actually not where this image excels. The razor-like resolution and detail is a testament not only to the release but to the quantum leaps of computer animation that these films consistently feature. There are a ton of ethereal shapes here with the spirits of the four elements. Water is particularly detailed and nuanced; with the translucent nature of the horse image, you will be quite amazed at how well it is pulled off here. Black levels are incredibly deep and inky with wonderful shadow definition. That’s important here, because there’s often as much going on in the shadows as out in the open in this film. HDR not only delivers the expected vibrant colors, but massively tight contrast. The fire salamander glows often against a dark background with superbly clean lines and no ghosting at all. You can see the freckles not just on Anna, but the very faint one on Elsa that I hadn’t noticed previously. That’s the kind of detail you can expect here. Few folks do this kind of animation better than Disney or Pixar, and this kind of release truly reveals how extraordinary the animation is.

The Atmos track defaults to a full 7.1 mix. Yeah, the songs are where the audio presentation really comes alive. The vocals remain front and center while the instrumentation flows throughout the room. The subs kick in for terrific depth and give weight to the massive rock creatures. There’s plenty of subtle ear candy that completes the immersive experience. The dialog cuts through just fine. There’s a solid reproduction of the spaces here like the large caverns that provide a natural delay and echo to the sounds, while closer more intimate moments bring you in to the center of it all. Plenty of swoosh here as these magical elements come to life.

Deleted Scenes: (17:57) There are five with a handy play-all option. There are introductions by the two directors, and those are often longer than the scenes themselves. The result is mostly animated storyboard, since the scenes were cut before final animation was completed.

The Spirits Of Frozen II: (12:02) This is pretty much the making-of feature. Cast and crew talk about the story elements and give insights into these four spirits that are the focus of the film. You get to see how each was researched and brought to life on the screen. There’s pre-viz, conceptual art, and tests.

Scoring A Sequel: (3:49) Go into the studio with the orchestra and get a little insight into the music.

Deleted Songs: (11:42) There are two, Home and I Wanna Get This Right. Again the directors offer a lot of info before each song is presented with animated storyboards.

Gale Tests: (3:01) One of the hardest spirits is the invisible one, and we get some fully produced test footage here.

On its own and as a sequel, it’s a good film. Children will love it, and it will likely meet most expectations. The question was: Will it draw as well at the box office? It certainly had the potential and wouldn’t even surprise me if it had passed the original. It ended up with almost exactly the same global numbers with significantly less domestic box office take. It’ll flourish in home video, and particularly in 4K. It’s a beautiful looking film. It’s really the first of last year’s holiday films, and it’s a pretty solid start of the holiday season. You haven’t seen the last of these characters, but enjoy what we have now. “I wouldn’t look too far ahead.”

Gino Sassani is a member of the Southeastern Film Critic's Association (SEFCA). He is a film and television critic based in Tampa, Florida. He's also the Senior Editor here at Upcomingdiscs. Gino started reviewing films in the early 1990's as a segment of his local television show Focus. He's an award-winning recording artist for Omega Records. Gino is currently working on his 8th album Merchants & Mercenaries. Gino took over Upcomingdiscs Dec 1, 2008. He works out of a home theater he calls The Reel World. Favorite films: The Godfather, The Godfather Part II, The Body Snatcher (Val Lewton film with Karloff and Lugosi, not the pod people film), Unforgiven, Gladiator, The Lion King, Jaws, Son Of Frankenstein, The Good, The Bad And The Ugly, and Monsters, Inc.
Ford v Ferrari (UHD Blu-ray) (4K) The Invisible Man (2020)