Posted in: Disc Reviews by Gino Sassani on March 3rd, 2020 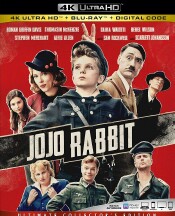 “Over the next two days you little critters will get to experience some of the things that the mighty German army goes through every day, and even though it would appear our country’s on the back foot and there really isn’t much hope in us winning this war, apparently we’re doing just fine.”

The book Caging Skies was written in 2000 by Christine Leunens. The book became more the inspiration for the film JoJo Rabbit rather than the source material, as they are very different animals indeed. The book is a rather sober look at the indoctrination of a young generation of boys and girls in Hitler’s infamous Hitler’s Youth organization. It was pretty much like the Boy Scouts of America, except, you know, for young Nazis. When director Taika Waititi got his hands on the material, it became somewhat a dark or black comedy with entire concepts added to the storytelling that were not a part of the original novel. Waititi is pretty much known as a comic director who has managed to intertwine his particular sense of comedy with other genre films with relative success. A prime example, of course, is his foray into the Marvel Cinematic Universe with Thor: Ragnarok, which became one of the oddest entry in that film franchise. Expect more when we get to see his work again with that old God of Thunder when the next Thor installment Thor: Love And Thunder is released soon.

It is the final days of World War II, and Jojo, played rather brilliantly by young Roman Griffin Davis, is a Hitler fan like no other. His room is filled with posters and propaganda in the way a young teen girl today would have posters of the latest young singer. He also has an imaginary friend that is Adolf Hitler himself, played with more than a little slapstick by the director Waititi himself. His goal is to find a way to get on Hitler’s personal body brigade. He’s finally going to get closer to his dream when he attends a Hitler’s Youth camp run by the inept Captain Klenzendorf, played by Sam Rockwell. The Captain has his eyes on Jojo’s mother, the attractive Scarlett Johansson. He ends up picking up the unfortunate nickname of JoJo Rabbit when he finds he can’t kill a bunny on command of the cruel boys running the camp. To reclaim his valor, he ends up getting reckless with a German Potato Masher grenade and leaves the activities scared and a little lame. But that doesn’t take away his love of Hitler and hopes of gaining his attention one day. Until that day arrives, Jojo must content himself with talking to his imaginary version of Hitler.

Jojo’s dreams come crashing down again when he discovers that his mother has been hiding a young Jewish girl named Elsa in their attic crawlspace, played with equal brilliance by Tomasin McKenzie. At first Elsa intimidates and bullies Jojo, playing on the fears that Nazi lore has spread about the demon race of Jews. She blackmails him into not giving away the secret to the Nazis or even letting his mother know he has discovered the girl. His mother tolerates his love of everything Nazi while she is secretly helping the underground fight the Nazis from within Germany. It’s a dangerous job, and when the inevitable happens, Jojo finds that he must depend on Elsa and that she might not be as bad as what he’s been taught to believe. In the end, she’s the only “family” he has left.

JoJo Rabbit is many things. It’s very much a coming-of-age story for the title character. It’s rather sweet and more than a little emotional to watch the young, ignorant boy face the destruction of his entire worldview. It’s sad when our heroes disappoint us, and that’s exactly what happens to Jojo as reality starts to replace this fantastic imaginary world Jojo has built his entire belief structure upon. The film is also, sometimes to too high of a degree, a comedy. Waititi plays imaginary Adolph as this klutz who couldn’t really represent this kid’s high ideal of the man and might have been far more effective had the imaginary Adolf been a more serious and, at first heroic character just as Jojo actually sees him. The fall of that hero would have been a much greater emotional beat when the world changes for the young idealist. Instead Waititi can’t help but become a clown, which does a disservice to the film’s message and our own intelligence throughout the film. It’s a truly distracting element and one that does not exist in any form in the book.

That’s not to say that the film shies away from the very real tragic reality at play here. The movie delivers some rather horrible realities and doesn’t sugarcoat them when they really need to count. The fate of his mother is one of the most powerful moments in the movie. Unfortunately, the movie is forever scarred by the director’s desire to play the slapstick so that imaginary Adolf is more Moe Howard than Adolf Hitler.

One of the film’s most endearing and enduring elements was a tremendous lucky break for everyone. These two kids are really good, and the evolving chemistry they share holds the film together even at its most silly moments. It’s the glue that keeps it from fracturing because of Waititi’s hubris, and more importantly it’s too compelling to resist. You put two other kids in these roles, and I think the film fails nine out of ten times. And that’s with Scarlett Johansson delivering her most nuanced performance ever. She’s not really in the film much, but her presence is felt strongly throughout. Sam Rockwell is always great, and that’s where the silliness works, and that’s where it should have remained.

JoJo Rabbit is presented in its original aspect ratio of 1.85:1. The ultra-high-definition 2160p  image is arrived at by an HEVC codec with an impressive average bitrate of 55-60 mbps. This is a somewhat stylized film with rather odd color choices and atmosphere. You get the typical earth tones of the browns and tans that dominate the soldier landscape with a somewhat bleak tint to the town. Yet there are color splashes that are brilliant and quite impressive but are somewhat off-putting and don’t really appear to belong. Some of the women’s clothing certainly takes on this feel. It’s part of the film’s effort to keep you somewhat off guard, and in more than a few places this as something of a fairy tale that doesn’t quite exist in our reality even in the past. There’s a lot of texture here that also comes through in that stylistic clothing. The dirt and dust of a city that has been through the ravages of war is rather atmospheric and fits nicely into that same other-worldly image presentation. Black levels are good with a soft form of shadow definition that doesn’t exactly take away the finer details but rather blends instead of stands out.

The DTS-HD MA5.1 mix is obviously there to serve the dialog. Certainly there are some nice score moments. Yes, the fight for the city at the end is alive with the sounds of war. Naturally, there is some fine ear candy to keep you alert. But like the image, the audio presentation isn’t really there to immerse you as much as to present to you. This isn’t a world you can share, so the audio keeps you at somewhat of a distance. There are some truly brilliant moments in the score that deliver on those tragic and poignant moments. The subs come alive in the battles, and the separation is very good. Dialog is where it all excels, and that’s entirely appropriate.

There is a whimsical Audio Commentary by Director Taika Waititi.

Deleted Scenes: (8:57) There are only three with a handy play-all option. All involve imaginary Adolf, where it becomes obvious a lot of that was somewhat improvised by Waititi.

Inside JoJo Rabbit: (29:46) This is pretty much the making-of feature that spends a lot of its time on the cast and putting it together. There’s audition footage here as well as the usual cast and crew comments, but they are more of a promotional/love-fest nature than really anything insightful.

The film has received some criticism for making light of tragic world events, but I don’t have a problem with that at all. Hogan’s Heroes showed just how much we’re willing to laugh at something as somber as the Nazis and Adolf Hitler. One of the best films I have ever seen is the Italian Life Is Beautiful, where Italian filmmaker Roberto Benigni also both directs and stars. The film tells the heartwarming, yet silly story of a family sent to a concentration camp during Hitler’s reign of terror, but the father doesn’t want his son to be afraid, so he tells him this is all a contest that they are lucky to be participating in where his family can win fabulous prizes for achieving certain goals. Like JoJo Rabbit, there is heart-wrenching sadness to be found here, and a story that doesn’t end well for everyone. But the lightness and silly plot manages to entertain without ever disrespecting those who suffered horribly in these concentration camps. I get the impression that Life Is Beautiful might have inspired this film somewhat, and it would have been an incredible film if Waititi could have reproduced that kind of heart and dark comedy together. Instead, JoJo Rabbit captures a little of both, to be sure, but it’s really only saved by two young actors who won’t let us turn away no matter how bad some of the comedy gets. Waititi has proven himself a capable director who often just gets in his own way. He gets too attached to his own moments so that the film itself suffers. He couldn’t help himself with his own role, one that should have been cut; instead he saw it differently. “I think I’m going to hold on to this. It’s pretty.”

Gino Sassani is a member of the Southeastern Film Critic's Association (SEFCA). He is a film and television critic based in Tampa, Florida. He's also the Senior Editor here at Upcomingdiscs. Gino started reviewing films in the early 1990's as a segment of his local television show Focus. He's an award-winning recording artist for Omega Records. Gino is currently working on his 8th album Merchants & Mercenaries. Gino took over Upcomingdiscs Dec 1, 2008. He works out of a home theater he calls The Reel World. Favorite films: The Godfather, The Godfather Part II, The Body Snatcher (Val Lewton film with Karloff and Lugosi, not the pod people film), Unforgiven, Gladiator, The Lion King, Jaws, Son Of Frankenstein, The Good, The Bad And The Ugly, and Monsters, Inc.
The Invisible Man (2020) ZZ Top: That Little Ol’ Band From Texas (Blu-ray)