Posted in: Disc Reviews by Jeremy Butler on March 13th, 2020 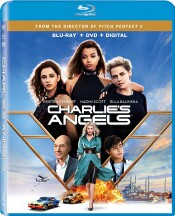 “You are in the presence of angels.”

After recently reviewing Charlie’s Angels: Full Throttle, it only seems fitting that I am returning to you in order to give you the scoop about the most recent installment of the franchise. It is in fact an installment into the franchise, as it exists in the same universe as the television series, as well as the two films that starred Cameron Diaz, Drew Barrymore, and Lucy Liu. However, in this installment, the Townsend Agency has gone global with agents (called Angels) operating in several international cities, each with their own Bosley (a title that serves as a rank in the organization). For the purposes of this film, we are focused on Sabina Wilson, played by Kristen Stewart (Twilight), Jane Kano, played by Ella Balinska (Midsomer Murders), and Elena Houghlin, played by Naomi Scott (live-action Aladdin). Rounding out the cast are Patrick Stewart, Djimon Hounsou, and Elizabeth Banks, who also serves as the film’s director.

As previously stated, this film is a continuation of the universe, paying appropriate homage to the film and television series while expanding upon the world of the Townsend Agency, which has moved on from a three-woman team to dozens of angels working independently or as a team internationally. We are introduced to Sabina and Jane in the opening scenes, bringing down an international smuggler called Australian Johnny. They make quick work of their target and function well together, despite obvious personality clashes and different backgrounds; Sabina is a skilled operative with a criminal background, while Jane is an expert at combat courtesy of her background with MI-6. Needless to say, the two are not best buddies.

Fast forward two years later. Sabina and Jane find themselves thrown together again for a mission in Hamburg, where their handler Bosley (this time played by Hounsou) informs them that the agency has been contacted by Elena Houghlin, a programmer at a tech company that has recently made a breakthrough in clean energy. Despite this breakthrough, Elena has discovered evidence that the device (Calisto) could potentially weaponized. During the meeting, the Angels as well as Bosley and Elena are attacked by an assassin after Elena. Though they survive the altercation, the Angels do take a casualty. Determined to avenge their loss, protect Elena, and recover Calisto, the Angels partner with Bosley (this time actress/director Elizabeth Banks). Elena, intrigued by this group of dominant and capable women, is not content with watching from the sidelines, and decides to earn her wings.

This was a solid opening for a potential franchise in my opinion. Obviously, the film was attempting to capitalize on the popularity of both Stewart and Scott, who is coming off two moderately successful films in the film adaptation of Power Rangers and the live action Disney film Aladdin. Balinska is not as well known, but to her credit, she held her own. Her character arguably has the biggest story arc of the film, going from being a solo act to learning what it means to be part of a team. Balinska manages to display a hardened exterior that warms as the film progresses and is broken during an emotional sequence where she learns just how important being a part of a team has become to her. The skill with which she handles this is one of the film’s high points.

Stewart is no stranger to big-budget films or independent films, easily serving as the film’s veteran talent. Despite her extensive resume, this outing for her was different than what I am used to seeing her do: acting as the film’s central person for comic relief. Her character tends to be morally ambiguous and by her own admission can be pretty annoying. That aside, this was a great outing for Stewart, who appeared to be having fun with the character.

This brings us to Scott. Her role is the fish-out-of-water character, as she is thrown into this deep end of this world that she had no idea existed. For that purpose, she serves as the audience’s eyes into the Townsend Agency. Like her, I was intrigued to see how extensive this world was. Another thing I enjoyed was the way her character jumped in headfirst. The stakes were high, and her character didn’t spend time panicking or feeling in over her head. She jumped right in and started pulling her weight, which was a fresh take and saves valuable time rather having her curl up into a ball.

Another character worth mentioning is Jonathan Tucker as the assassin. I’ve been a fan of Tucker for years, as he never seems to disappoint in his roles, whether it be a starring role or a guest-star appearance. His role in the film is no different, as despite not having many lines, he has an intimidating presence. My one note would be: I think that his role should have been a completely non-speaking role, because for most of the film I assumed he was mute, and that added to character and was reminiscent of Crispin Glover’s character in the 2000 version of the film. By the time he does speak, his lines are so basic that it diminishes the mystique that he did such a great job creating for the character.

He doesn’t dominate the film, but this is as much his story as anyone else’s.

Charlie’s Angels is presented in its original aspect ratio of 2.39:1. The 1080p image is arrived at with an AVC MPEG-4 codec at an average 25-30 mbps. The high-definition image presentation is a bit of a mixed bag. There are moments particularly in some action scenes were the image breaks down with either soft focus issues or some kind of digital noise issues. The bit rate is a tad on the low side, but I suspect there’s more to it than that. The image presentation does shine in other aspects. Colors and textures are both dazzling. The Angels’ costumes run the entire gamut here, and the image does the glittering, colorful stuff quite nicely. Close-ups are particularly sharp, and it’s so detailed you see pores and makeup marks. Black levels are stronger than the rest of the image would portend. You get rich deep blacks with some nice contrast and shadow definition.

The DTS-HD Master Audio 5.1 is near as aggressive as I thought it should be. Surrounds don’t really deliver the immersive kind of action scenes I’ve come to expect from this kind of a film. I found that to be somewhat lazy. The subs do their best to make up for the lack of surrounds and deliver nice punches to explosions and other action moments. The score is dynamic, if a bit too repetitive for my tastes. Dialog cuts through nicely, and there is a rather soft comfort level here as if the dialog were really the focus and the audio presentation was careful not to intrude or shake you up very much. I say shake me the heck up. I didn’t invest in this kind of equipment to watch a “soft and comfortable” action film.

Deleted And Extended Scenes: (5:15) There are five with a play-all option

Stronger Together – The Sisterhood Of Angels: (7:33) The behind-the-scenes feature profiles the three lead characters and actors. They offer a lot of insight into their on and off screen chemistry and other cast and crew chime in to offer their own insights on the three new Angels.

Elizabeth Banks – As BOSSley: (5:17) This one focuses on Banks as both actor and director on the film. We get a lot of behind-the-scenes footage of her in both roles.

Warriors On The Set: (5:45) This is a look at the stunt choreography, rehearsal and f/x that make up the action scenes.

Tailored For Danger – Styling The Angels: (6:17) An extensive look at wardrobe.

I enjoyed this more in-depth world of the Townsend Agency, as well as the explanation for why there was more than one Bosley. By happy coincidence, this could serve as an explanation for why between the 2000 film and its sequel that the Bosley character was played by two different actors. In reality, we know it was because of tension between stars Bill Murray and Lucy Liu, but for continuity purposes in the film, making the Bosley title a rank within the organization was a touch of genius. To learn just how extensive the Townsend Agency really is, make sure you stay for the credits as it is full of all-star cameos and will have you saying: “Give me my wings.”

Jeremy Butler is a film school graduate of the International Academy of Design and Technology. He is been writing for Upcomingdiscs since 2012; however, movies have played a big part of his life for much longer. Favorite genres include horror, science fiction/fantasy, and comedy. Favorite movies are V for Vendetta, Boondocks Saints, Kiss Kiss Bang Bang, and The Godfather.
Midway (2019) (Blu-ray) A Quiet Place (UHD Blu-ray) (4K) (Steelbook)