Posted in: Disc Reviews by Brent Lorentson on May 28th, 2020 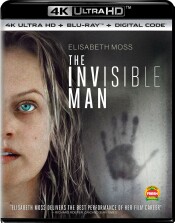 It wasn’t all that long ago that Universal was seriously attempting to develop a Dark Universe for their classic monsters.  Things changed after the releases of Dracula Untold and The Mummy and their poor box office showings, but having seen those two films, I feel fans were spared in the long run from a disaster that could have been.  Then in 2019 word got out that Blumhouse was going to be doing The Invisible Man, and this somewhat reignited the talks of a Dark Universe project.  When I first heard Blumhouse was backing the film, I was cautiously optimistic about the project; where the company does have its hits like Happy Death Day and Get Out, there are plenty of duds as well.  It’s when Leigh Whannell got attached that I had some hope for the film.  For those unfamiliar with the name, Whannell is the writer responsible for the Saw franchise as well as the Insidious franchise.  Now the wait is over and the film has been seen; how does it turn out? The film opens up with Cecilia (Elisabeth Moss) attempting to escape from her home while her husband is asleep.  This opening sets the tone masterfully, and as much as I hate the phrase “will leave you on the edge of your seat”, that is simply what this sequence is.  So much is revealed in the visuals of the home and the performance that Moss delivers that the audience can appreciate that characters need for escape.  If anything it’s in these opening moments of the film as Cecilia is wandering through the home that almost too much is revealed about the story that will follow.

After her escape the film picks up two weeks later; Cecilia is in hiding from her husband.  It’s this portion of the film that comes unexpectedly and becomes engaging as we’re watching this woman attempting to reacclimate herself to the world as she continues to live in fear of her husband.  How this is shown as well as talked about in the film not only helps develop the character but in the process is setting up for when things go sideways for Cecilia.  The few relationships that Cecilia has are with her sister Emily (Harriet Dyer) as well as James (Aldis Hodge) and his daughter, Sydney (Storm Reid). The interactions with these characters are so well grounded that we can believe these relationships are more than just filler for the film; they are genuinely layers that surround Cecilia and help her feel safe once again. After hearing Cecilia’s husband has killed himself, we can almost believe she’ll get her well-deserved happily ever after, but this is a horror movie, and we all know better.

The first 2/3 of the film is riddled with tension and delivers an Invisible Man film unlike anything we’ve seen before.  It’s a refreshing take on the character that we haven’t seen before, and I do love how the focus of the film is on Cecilia.  When we are introduced to the Invisible Man elements, it’s done in such a way that we’re left wondering if it’s supernatural, something physical, or could it possibly be all in her head?  Just knowing how the film could go in so many directions and avoiding the “mad scientist experiment gone wrong” trope allows the film to become its own story and continue to feel fresh.

As for that final 1/3 of the film, well, that’s when the mayhem comes in and the film earns its R rating.  IMDB has the budget for the film at $7 million, a budget that is remarkable considering how the film looks as though it cost at least five times the amount.  It’s the low-tech approach to the film that I loved the most and what makes the story believable and in turn makes it that much more terrifying.

Though it’s only February, it looks like The Invisible Man is the first great horror film of the year, but there are plenty more that are coming up in the following months.  I want to revisit the film again before I consider labeling this a modern classic. I do want to see how it holds up after multiple viewings, but one thing I’m certain of is that I had a lot of fun with this one, and I wouldn’t be surprised if this breaks $100 million.  Get out there and check this film out; this is definitely a must-see film, especially for horror fans.

The Invisible Man is presented in its original aspect ratio of 2.39:1. The ultra-high-definition 2160p  image is arrived at by an HEVC codec with an impressive average bitrate of 65-70 mbps. Darkness is the mood of this film, and it is certainly dark to the point of being almost monochromatic in places. I’m sure it’s a fitting tribute to the earlier Universal films, and it frankly fits this film extremely well. This is a smartly shot native 4K sourced movie with wonderful elements that make it stand out quite clearly even if the bad guy doesn’t. The Dolby Vision and HDR allow for tight black levels that offer as inky black as it gets while still delivering incredible shadow detail. The black suit coming in and out in the rain is one of the most perfect image moments I’ve encountered. All of the f/x elements used to bring us an invisible creature are found here from green suits to computer-generated images and simple wire work. It’s so clean and flawless that even under this kind of resolution and detail it is completely convincing. Close-ups provide everything from pimples to pores and bring out Moss’s performance quite well. The suit fazing shots are creepy as hell and stand up to detail. The opening credits with the ocean waves and disappearing titles work better here than I remember in the theater.

The Atmos track defaults to an awesome 7.1 mix. Again it starts with the crashing of those waves. The subs create a thunderous environment that keeps you on the edge of your seat. The score is a bit more like an electronic pulse at times, which is far more moving with your subs hit high. The surrounds are active and very crisp. In the early escape from the house there is that very atmospheric creaking of the trees in the subtle breeze. The background of the ocean from the house combines with those score pulses and honestly is more than a little unnerving. The score creates this envelope of sound that comes from the back and starts to fold and bend around you. It certainly increases that unsettled feeling and engages your hearing throughout. There aren’t giveaway steps and other sounds to give you warning of the invisible stalker, which adds just a bit more to the realism of it all. Dialog comes through cleanly, and you won’t have to ride the volume on this one. The audio presentation was created with as much care as everything else.

The extras are all on both the Blu-ray and UHD copies of the film. The UHD offers 4K but not HDR. Moss Manifested: (3:54) A brief segment about the film’s star and what brought her to the film and her experiences with it.

Directors Journey with Leigh Whannell: (10:51) I wish this were so much longer. There are so many moments I wish we could have gotten to see how they were executed.  On the bright side, this does give a little more of a glimpse into the process of making the film on set. Easily the best extra feature on the disc.

The Players: (5:24) Pretty much the standard extra where we see the cast members discussing their roles.

Timeless Terror: (3:04) A bit of a missed opportunity with Leigh Whannell discussing his take on the “original” material.

Deleted Scenes: (13:24) There are nine scenes in total with a “Play All” option.  For the most part several of the scenes are just filler, though the one I was happy to see is “There’s someone sitting in that chair”. We got a glimpse of it in the trailers, but it was cut from the final film.

This was the last film I got to see in theaters before the world was confronted with Covid-19 and the nation got shut down.  I’m glad I was able to see this on the big screen, and it’s unfortunate that the film had to come out when it did, at least from a box office standpoint.  I absolutely love this film, and when I see “remakes” like this, it definitely gives me hope for other reimaginings of classics down the road.

Brent Lorentson is a horror writer and film critic based out of Tampa, Florida. With a BA in Digital Film, he co-wrote and co-directed Scavenger Hunt. His short stories have appeared in various horror anthologies. In 2019 his short script Fertile Blood will be a part of the anthology horror film Slumber Party. He is currently working on his first novel A Dark and Secret Place set to be released in late 2019. Favorite Films: Taxi Driver, Fight Club, I Saw the Devil, The Wild Bunch, Dawn of the Dead, A Clockwork Orange, Pulp Fiction, Heathers, The Monster Squad, and High Fidelity.
Days of Thunder ( UHD Blu-ray) (4K) Escape from L.A. (Collector’s Edition) (Blu-Ray)