Posted in: Disc Reviews by Jeremy Butler on September 11th, 2020 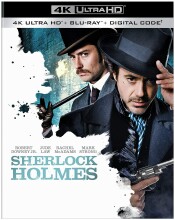 “Mr. Holmes, you must widen your gaze. I’m concerned you underestimate the gravity of coming events. You and I are bound on a journey that will twist the very fabric of nature. But beneath your mask of logic, I sense a fragility. That worries me. Steel your mind. Holmes. I need you.

This was quite possibly my favorite scene from the movie, as it perfectly exemplified the journey that the character was about to embark on. This monolog was perfectly delivered by the film’s villain played by Mark Strong and could be seen as the battle cry for Robert Downey Jr.’s Holmes.  With an original story from Producer Lionel Wignam, this reimagining of the beloved characters thrust us into the action right away with Holmes hot on the trail of a killer. Hired to find a kidnapped girl, Holmes locates her and prevents her from being sacrificed for a dark arts ritual. Capturing the mastermind, Lord Henry Blackwood (Mark Strong), Holmes forgoes the credit as per usual.

Months later, Holmes’ mind is rebelling in stagnation. Without another case to occupy his facilities, he becomes a hermit, engaging in loud and destructive experiments. Further complicating his life, his partnership with his most trusted ally, Dr. John Watson, is ending, as Watson intends to marry and will be settling in to establish his medical practice. He needn’t worried too long about stagnation, as a former rival termed “The Woman”, Irene, arrives shortly to enlist his services. In addition, Blackwood somehow survives his own execution, furthering the legend of his occult abilities, and returns with a devious plan that threatens to twist the fabric of nature.

“Guy is the perfect director for this reimagination of Sherlock, because he is an innovator.”

That was RDJ’s assessment of Ritchie’s ability as a director. It is a sound assessment, too, as Ritchie’s unique style of storytelling is well suited for the film. I would go as far to say that he may have been one of the only directors who could have reimagined the series in this manner. He focuses on creating character-driven stories, infusing each person with their style and personalities that establishes great chemistry. This film is no exception, either, as that is a key factor in the success of this film.

Character-driven materials are only as good as the people who are playing those characters, and they have assembled a A-list that includes Robert Downey Jr., Jude Law, Rachel McAdams, and Mark Strong. Individually they are all powerhouses; put together is a thing of beauty, especially the relationship between Downey and Law. Their relationship is brotherly in the sense that truly rely on one another while at the same time annoying one another. The back-and-forth banter when they were arrested, when a pent-up Watson airs his grievances, only to be met with an offer for holiday in the country to which Holmes invites himself along, was among one of my favorite scenes of the film’s chemistry.

A close second would be McAdams and Downey at the Hotel Grand, where she manages to outwit him again. During this exchange, we can see that the relationship between these two is deeper than anticipated. They are similar in many ways, which speaks to the attraction, but circumstances and Holmes’ inability to fully trust Alder (and with good reason, as according to Watson’s own account, she has outsmarted him twice), as well as Adler’s clear ulterior motives complicate the relationship. To speak of the individual performances, Downey is clearly the big draw, portraying Holmes as gruff while still displaying an unrivaled intellect. Downey’s smug style of quips perfectly meshes with the character, injecting much needed and appreciated comedy into the film.

The film also nicely sets up for another installment (which came in 2011 in the form of Sherlock Holmes: A Game of Shadows), by teasing the introduction of Holmes’ most known antagonist: Moriarty. This character was rife with intrigue, due in large part to the fact that he works from the shadows. Only tidbits about the character are presented, but I can still remember that what was revealed made me hungry for the next film.

Sherlock Holmes is presented in a slightly modified aspect ratio of 1.78:1. from its original 1.85:1. It comes in with an average bitrate of 65mbps. I’m not in love with the alteration, but it doesn’t appear to cause the film to lose any of its peripheral detail. The ultra-high-definition image presentation is a hard one to fairly evaluate. There is some tremendous cinematography here, but it is also severely layered with both computer-generated enhancements and layers of processing from color gradients to contrast. That leaves us with a visually stunning image, but one that also looks rather artificial. The London exteriors are heavily graded with colors desaturated, and even the natural elements given a highly stylized appearance. The result is also often a rather soft look with a particularly glossy edge to the grit and grime of the environments. Close-ups offer some of the finer detail, but even here there is the aura of something artificial. It’s all part of the style and has very little to do with the master specifics here. Black levels are average with shadow definition harmed by the style. There’s an almost graphic-novel feel to the whole thing, and again that’s pretty much the style in which it was shot. HDR doesn’t really add anything to the color here but rather helps a bit with the contrast issues. At least light sources get a little more punch than in earlier releases.

Their is no updated audio presentation here. You get the same DTS-HD MA 5.1 track you had with the Blu-ray. It’s a nice enough presentation. Dialog comes through quite nicely. The Hans Zimmer score still has its wonderful highlights, but there’s nothing terribly dynamic going on here. The subs don’t quite liven up those explosive moments, and I was never really immersed into any of the action or atmosphere. It’s all very average with a few nice surround moments but certainly no improvement.

Maximum Movie Mode: This added something new to this experience for me, because being a movie that I thoroughly enjoyed when it first came out, I’ve repeated the experience numerous times already; however, this interactive viewing experience, which includes walk-ons with director Guy Ritchie, provided a fresh experience while also providing behind-the-scenes details. Definitely worth watching.

Sherlock Holmes Reinvented (14:06):  An in-depth behind-the-scenes featurette that is a must-see in my opinion. It delves into all aspects of this reimagination of the beloved character such as casting of Robert Downey Jr. and Jude Law, as well as what Guy Ritchie brought to the table. Everything that I could have wanted to know about the film, this featurette supplied.

Drawbridges & Doilies: Designing A Late Victorian London (05:00): With eleven weeks prep, the production design team had to find a way to create a completely immersive Victorian London experience. They had to travel outside of London sometimes or build the docks completely to in order to accomplish it, but one look at the film’s set design shows their dedication and that their hard work paid off.

Not A Deerstalker Cap In Sight (04:15): You may have noticed that Sherlock Holmes’ signature hat was missing. Well, this featurette gives you the inside scoop into why that was as well as what all went into creating the style of each character.

Ba-Ritsu: A Tutorial (03:58): Guy Ritchie’s chosen form of martial arts is Jiu Jitsu; Robert Downey Jr.’s chosen style is Wing Chun. This featurette is all about blending these styles together to try and form Sherlock’s chosen style: Ba-Ritsu.

Elementary English: Perfecting Sherlock’s Accent (04:04): Wondering how an American RDJ came up with the accent in order to play the beloved English character. Ask celebrated dialog coach Andrew Jack. With this featurette, you can do that very thing.

The One That Got Away (03:44): Irene Adler was a character who was only featured prominently in Sir Arthur Conan Doyle’s “A Scandal in Bohemia” story, but her legacy was solidified in the franchise as one of the only people to outsmart the great the detective. It’s no great wonder that Ritchie decided to feature the character in this reimagination with the help of Rachel McAdams.

Powers Of Observation & Deduction (04:01): Sherlock Holmes superpower was his unparalleled ability to observe and form scary-accurate deduction from those observations. It is a formidable skill, and the difficulty was to create a story that would challenge this ability. Producer Lionel Wigram takes us through that process.

The Sherlockians (03:03): At an annual conference to celebrate the beloved character, several experts provide their opinion on why the character has endured through the ages. Only the diehard fans of Sherlock Holmes will truly appreciate how much of a gem this featurette is.

Future Past (03:08): To make the setting a living, breathing part of the story, you need authenticity. Unfortunately, not all the elements that made Victorian London such an interesting period exist anymore, but with the wonders of technology, those elements can be recreated. Thank you, Visual Effects team.

I’m usually against re-releases, as they tended to feel like cash grabs, but I fully endorse this one. Without question, it brings something new to the table that was not previously available with the original release. The addition of the Maximum Movie Mode alone makes the discs worth the price, but you are treated to much more with all the extras. This truly is one of the most in-depth discs that I’ve had the privilege of reviewing.

Jeremy Butler is a film school graduate of the International Academy of Design and Technology. He is been writing for Upcomingdiscs since 2012; however, movies have played a big part of his life for much longer. Favorite genres include horror, science fiction/fantasy, and comedy. Favorite movies are V for Vendetta, Boondocks Saints, Kiss Kiss Bang Bang, and The Godfather.
Supergirl: The Complete Fifth Season (Blu-ray) Sherlock Holmes: A Game of Shadows (UHD Blu-ray) (4K)