Posted in: Disc Reviews by Gino Sassani on April 2nd, 2021 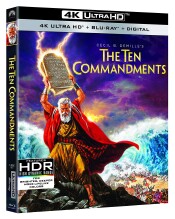 “The theme of this picture is whether man ought to be ruled by God’s law, or whether they are to be ruled by the whims of a dictator, like Rameses. Are men the property of the state, or are they free souls under God? This same battle continues throughout the world today. Our intention was not to create a story, but to be worthy of a divinely inspired story, created 3,000 years ago, the five books of Moses. The story takes three hours and 39 minutes to unfold. There will be an intermission. Thank you for your attention.”

A sure sign that Easter is just around the corner is yet another home video release of perennial seasonal favorite The Ten Commandments. In years past, we got the multi-disc edition, complete with original silent version of the film. This particular version is rather more stripped down, as far as features go, but it does mark the film’s debut release on UHD Blu-ray and in 4K.  Unlike previous editions, this one takes full advantage of the superior source material. The film was shot on 70 mm film, and that gives us an equivalent of 8K in today’s resolution terms. And while this recent remaster doesn’t take full advantage of that fact, it does amount to a 6K restoration that goes above and beyond the current specs of this release. No new extras are provided, and this version does not include the earlier silent film, but it’s a must-have for completely technical reasons. You’ll enjoy the improvement here, and you’ll get to enjoy the film in a format that is the best resolution at which anyone has seen this film since the 1950’s, and it was likely a very rare theater that actually projected the film at 70mm, if any actually did. It’s the best this thing will ever look. Well … at least until the eventual 8K release, and that’s going to be … never mind; don’t want to break any of those commandments reviewing the film.

The first act of Cecil B. DeMille’s epic is as much a tale of Egyptian power politics as it is the story of a man coming to terms with his identity and destiny. We follow Moses (Charlton Heston) as, rising from triumph to triumph, he has the throne of Egypt within his grasp (much to the displeasure of Yul Brynner, the Pharaoh’s actual son and rival for the affections of the sinuous Anne Baxter), only to lose all worldly power when he realizes he is actually the son of Hebrew slaves. Cast out of Egypt, he returns to demand the liberty of his people, and comes clutching a fistful of plagues to make sure his former brother pays heed.

The Ten Commandments is a blockbuster whose scale still dwarfs just about every other epic that followed in its wake. (And, adjusting for inflation, it is still the fifth most successful film of all time, its take considerably more than that of Titanic or Avatar.) As a filmmaker, DeMille wasn’t so much an artist as he was a showman, with all of the delightful vulgarity (I mean that as a compliment) that the word entails. Whatever the moral lesson of his films, it was very often there as a means of getting to the good stuff: all the orgies and whatnot that would duly be punished when the time came, but that director and audience could revel in with impunity for that very reason. When he put on a show, it was a spectacle of the first order, and over half a century after its release, the images in The Ten Commandments still astound and awe. The gargantuan sets and thousands of extras anchor the special effects, which are still impressive, by dint of the grandeur of their conception, even if, from a purely technical point of view, they have since been surpassed.

One of the joys of this film, speaking for myself, is that DeMille demonstrates that if cheese is sufficiently monumental, it turns back into a fine art. And make no mistake: there is a great deal of extremely rich dairy product here. DeMille doesn’t have a subtle bone in his body, and the hammer-to-the-head approach of the film and its attendant camp qualities are announced by the portentous prologue, where DeMille himself addresses the audience and spells out the subtext of the epic. Turns out that this is something of a Red Scare vehicle, with the Egyptians subbing for communists. (Who the Hebrews are in this schema is never explained.) Then, still before the first frame of the narrative has arrived, we get another joy with DeMille’s screen credit: “Those Who See This Motion Picture – Produced and Directed by CECIL B. DEMILLE – Will Make a Pilgrimage Over the Very Ground that Moses Trod More Than 3,000 Years Ago.” Like I said, subtle the man was not.

The script and the cast offer many more pleasures. Heston, of course, comes across like he was born to play the role, but John (later Mr. Ursula Andress, later still Mr. Bo) Derek as Joshua? And what on earth is Edward G. Robinson doing here? Having a fine old time, that’s what. He and Vincent Price know a fine platter of ham when it’s presented to them, and these two dig in with gusto. Good thing, too, when dialog like “Too many ears tie a rat’s tongue” (??!) lies in wait.

The Ten Commandments is presented in a modified aspect ratio of 1.78:1 from the original 1.85:1. This 6K restoration is the same transfer on the earlier release Blu-ray edition and remains the same on this Blu-ray. But the ultra-high-definition image presentation is a true sight to behold. We’re talking that rare event where the source material and the digital intermediate along with the actual transfer are all at a higher resolution than 4K. It shows in so many ways. It’s important to remember that there is an 11th commandment that must be obeyed here, or you are wasting your money on both the release and your equipment. THOU SHALLT NOT ENGAGE IN MOTION SMOOTHING. Turn that junk off and experience a high-resolution film the way it was intended to be experienced. Colors will jump out at you. Reds appear to play a particularly important role here, from the robes of Moses to the red waters of one of the plagues. They are not only brighter but richer and deeper thanks to HDR color reproduction and enhanced contrast abilities. The animated f/x hold up quite nicely even after 70 years of improved technology. The staff turning into a cobra remains a marvel of f/x even today. There’s still plenty of grain here. DNR is certainly evident, but the smart decision was to be sure to not wash away the wonderfully organic nature of the film. Details are at the highest they’ve been, which is a true testament to the production design on the original shoot. Black levels allow for nice shadow definition even if they are not quite so inky black. Sharpness is razor. The scenes of the Nile when the baby Moses is sent adrift are breathtaking. This release stands as proof that old filming techniques can absolutely still hold their own against modern methods.

The DTS-HD MA 5.1 track allows for a fairly nice mix. The massive Bernstein score is nothing short of majestic here. The fidelity is as good as it ever was. The surrounds are quite modest, and that’s as it should be. There’s some natural expansion, to be sure, but it’s kept in check and doesn’t completely re-arrange the audio presentation. Backgrounds get a little more attention, but not so much as to take the film out of its source intentions. Subs give a little more punch particularly to the voice of God, which was also done by Heston. Dialog is the true service of this presentation, and it’s wonderfully reproduced here.

The same extras on the last release just on the two film discs on Blu-ray.

All told, The Ten Commandments, coming as it does in the wake of the end of the studio system, is a twilight example of the Old Hollywood pulling out all the stops and producing exactly the kind of entertainment it could do so well: loud, colorful, exciting, HUGE, crass, messy, sprawling, spectacular and endlessly rewarding to watch again, and again, and again. “So let it be written. So let it be done.”

Parts of this review were written by David Annandale

Gino Sassani is a member of the Southeastern Film Critic's Association (SEFCA). He is a film and television critic based in Tampa, Florida. He's also the Senior Editor here at Upcomingdiscs. Gino started reviewing films in the early 1990's as a segment of his local television show Focus. He's an award-winning recording artist for Omega Records. Gino is currently working on his 8th album Merchants & Mercenaries. Gino took over Upcomingdiscs Dec 1, 2008. He works out of a home theater he calls The Reel World. Favorite films: The Godfather, The Godfather Part II, The Body Snatcher (Val Lewton film with Karloff and Lugosi, not the pod people film), Unforgiven, Gladiator, The Lion King, Jaws, Son Of Frankenstein, The Good, The Bad And The Ugly, and Monsters, Inc.
News of the World (UHD Blu-ray) (4K) Wonder Woman 1984 (UHD Blu-ray) (4K)