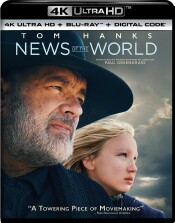 “Good evening, ladies and gentlemen. My name is Captain Jefferson Kyle Kidd, and I’m here tonight to bring y’all the news from across this great world of ours. Now, I know how life is in these parts, working a trade sunup to sundown. No time for reading newspapers. Am I correct?”

How about reading a review for Universal’s News Of The World? If you spare a few minutes, I’ll tell you a little something about the film, and you might just end up with a copy of the film on UHD Blu-ray in 4K on your home video shelves. I’m certainly glad there’s a copy on mine. The film is based on the novel by Paulette Jiles with a screenplay by Luke Davies and director Paul Greengrass.

Imagine a world with no internet. No streaming. No satellite news television stations to bring you news, fake or otherwise, 24 hours a day…every day. Events reach us from so many places and points of view that we can watch a catastrophe live from anywhere across the globe. News has become a bit of a soft term that doesn’t really mean what it used to mean. When I was a kid, I wanted to be a reporter. Truth be told, I wanted to be Carl Kolchak and fight monsters. But there’s something about bringing the news to the scores of people on this planet that appeared special to me. So I think I can relate to Captain Kidd here, and I have to confess to a little bit of favorable bias going into the film. But did it live up to my somewhat exaggerated expectations? Well… I’m here to tell you.

“I read the news from town to town.”

Captain Kidd (Hanks) makes a living from reading newspapers. It’s a decade after the end of the Civil War, and Kidd was a captain in the army. Unfortunately, he happened to be on the losing side, and his military career ended in surrender at Galveston, Texas. Unlike many of his fellow veterans, he’s not a bitter man. He found a certain joy in bringing the news of the world to various towns in Texas. It’s kind of like a traveling show. He reads the papers to anyone with, as he describes, “a dime and the time to listen”. His visits are promoted with flyers, and he leads a peaceful and rather content life. When he leaves a reading in one of those towns, he comes across a wagon that has obviously fallen to mishap. Amid the destruction is a young girl (Zengel). She’s somewhat wild and speaks no English. She carries papers that explain that six years earlier she was taken by a Kiowa raiding party that invaded her home and killed the rest of her family. She was taken by the tribe and raised as Kiowa. Recently she had been rescued by an army unit who found her in a settlement they raided. She was being taken to an aunt and uncle when the convoy was attacked. Once again she is the last survivor.

Captain Kidd isn’t exactly sure what to do with her. He tries to consult the local Indian agent but finds he’ll have to wait for his return three months later. He can’t wait, because there are towns to visit. News to be read. Dimes to be earned. His attempt to keep her with a family for the three months fails, and he undertakes to deliver the young girl himself, hopefully making news stops along the way. What he finds is a hostile part of the country where former soldiers attempt to buy the girl and don’t really take no for an answer. He has to contend with one town held in the tyrannic grip of a land baron. It appears as though the journey is cursed and fated to end in defeat. But along the way he begins to bond with the girl, and that bond carries them both through the hard road ahead.

It takes quite a while for the chemistry between Hanks and Zengel to really develop. It’s quite awkward at first, and I was starting to be concerned that this was going to be a longer and more tedious journey for me than it was for the characters. But along the way they began to find a truly solid chemistry that made the film more and more compelling the longer they went. It wasn’t the action scenes that did anything to create this change. It was actually some of the quiet moments, like when they come upon the house the girl was first raised in that still bears the scars of the slaughter of her family from the destroyed simple furniture to the bloodstained bed coverings and pillows. Hannah Zengel does a masterful job of sucking us right into that internal emotional turmoil, and she does it without saying a word. Hanks obviously caught on to the kind of young actress he was working with, and you can literally see him change his own acting to enhance that emotional center. Once he makes that change, it’s like a lightning bolt, and the dynamics change for the better. From that point the film’s plot becomes far more predictable, but the journey is no longer tedious or long. At this point you don’t ever want the film to end. It’s seldom that you can see that kind of adjustment in an actor’s approach, and I can’t recall a time I thought it was more compelling.

Tom Hanks has begun to have a blossoming career out of these emotional characters. This back to back with his portrayal of Fred Rogers could be the beginning of his mature career cycle, and if he continues to make the right choices, I think the best is yet to come.

News Of The World is presented in its original aspect ratio of 2.39:1. The ultra-high-definition 2160p  image is arrived at by an HEVC codec with an incredible average bitrate of nearly 100 mbps. Colors are somewhat intentionally muted here so the HDR isn’t trying to bring you vivid or eye-popping bright colors. Instead there’s a bit of wonderful texture here from the mud and rain to the costumes. The film uses subtle variations in color temperature and shading to give each location on this journey a somewhat unique look. The film takes advantage of a lot of extreme close-ups of characters, and they look picture-perfect, from stubble to dirt smudges. Black levels are quite strong, and the shadow definition shines during several night scenes that allow you multiple layers of detail. It’s important to note that both the source and digital intermediate are both native 4K. The difference between that and an all too common upscale from a 2K shott or intermediate is stunning to say the least. There are some amazing New Mexico establishing shots here that will put you right in the center of these environments. While color is intentionally bleached a bit, the color shading and contrast allow for a powerfully realistic image presentation.

The Atmos track defaults to a solid 7.1 mix. Former Elton John band member James Newton Howard delivers his best score to date with this one. It’s some of the best cinema music I’ve encountered since Zimmer’s Gladiator score. It’s often subtle and acoustic, but it breathes a life of its own in this audio presentation. There are some beats here that really tug at you emotionally. I’ve been a fan of Howard since his days in the 1970’s playing keys for Elton. The only film composer I’ve had the pleasure to see and hear live, and this is a treat just in itself. The surrounds aren’t exactly aggressive, but they do have their moments. You have gunfights that surround you with pings and small explosions that zip around your ears like a buzzing mosquito in a Florida summer. Subs don’t dominate but add just the right amount of depth to the entire presentation. Dialog comes through most of the time, but I’ll admit there are moments where I ended up using the subtitles. I’d say it was more or less intentional as part of the film’s atmosphere. This is a movie that knows how to be quiet yet powerful all at once.

There is an Audio Commentary with co-writer and director Paul Greengrass. It’s informative and a little low-key.

The extras are all on both the Blu-ray copy of the film and the UHD copy and in HD on both.

Deleted Scenes: (11:05) There are seven and no individual selection.

Partners – Tom Hanks and Helena Zengel: (7:01) A nice look at the two characters both on and off the screen. They each talk about their characters and working with each other. Too many clips and not enough behind-the-scenes material here, but some rather nice candid moments.

Western Action: (7:37) With significantly more behind-the-scenes footage, this feature looks at those iconic Western elements from the film from old-fashioned shooting-from-behind-rocks gunfights to riding horses.

Paul Greengrass Makes News Of The World: (10:59) This making-of feature is far too brief and pretty much focuses on director Greengrass. There’s a bit of the expected love-fest stuff going on here, but the best is when the feature has the cast and crew looking more closely at elements like props, costumes, music, and locations and sets.

The Kiowa: (3:57) Greengrass worked closely with the Kiowa Nation, and you get to meet them here. They worked as consultants and extras as well as providing cultural support to the production.

“We’re all hurting. These are difficult times.”

News Of The World was supposed to live a very different life than it ultimately led. It was intended to be one of those box office sleepers that quietly brought in a solid return. The pandemic changed a lot of things for a lot of people. While this wasn’t ever going to be a tentpole f/x extravaganza, it would have done quite well. Tom Hanks ended up being the first real celebrity to catch COVID-19, and there was enough unknown at the time that many worried we were going to lose the gifted actor. Of course, he recovered without much of any kind of lasting health troubles, and we’re going to see more of him in the future. Where that might be remains a big question mark. It’s harder to get out and see things these days, so that’s why I’m here. Quality films like News Of The World or stinkers like … well, you have enough on your plate to waste time on those, and they know who they are. So if you’ve got a time and a few minutes, “Let me do that work for you.”

Gino Sassani is a member of the Southeastern Film Critic's Association (SEFCA). He is a film and television critic based in Tampa, Florida. He's also the Senior Editor here at Upcomingdiscs. Gino started reviewing films in the early 1990's as a segment of his local television show Focus. He's an award-winning recording artist for Omega Records. Gino is currently working on his 8th album Merchants & Mercenaries. Gino took over Upcomingdiscs Dec 1, 2008. He works out of a home theater he calls The Reel World. Favorite films: The Godfather, The Godfather Part II, The Body Snatcher (Val Lewton film with Karloff and Lugosi, not the pod people film), Unforgiven, Gladiator, The Lion King, Jaws, Son Of Frankenstein, The Good, The Bad And The Ugly, and Monsters, Inc.
Earwig and the Witch (Blu-Ray) The Ten Commandments (UHD Blu-ray) (4K)