Posted in: Disc Reviews by Gino Sassani on September 24th, 2021 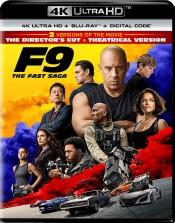 ” Okay, listen up! I want 50 of the best men! I want guns! I want wheels, freaking X-wing fighters — I don’t care! The Millennium Falcon, Chewbacca if you can get ahold of him. Money’s no object. Go.”

The year 2020 and nearly half of 2021 make up a time in our lives we’d all like to try to forget. And while the remnants of a pandemic that is not quite over still intrude on our realities, many aspects of our lives are starting to return. We’re spending time with our family and friends again. Those simple parts of our lives we once took for granted are starting to return, and I suspect we’re all apt to savor them just a little bit more from now on. The movies have been back for a little while now. We’ve finally started getting access to press screenings for the first time in over a year. Needless to say, so many of us are happy to be back in the theaters. So far we’ve had some films start to breathe life back into the box office, but today expectations remain lower, and they will for a while. We’ve had some successful films, and you can feel it in the air. Somewhere, somehow, there’s got to be a film just itching to break open the floodgates and give us our first real break-out blockbuster in 18 months. Fasten your seatbelts, because I think the day has finally arrived, and while it isn’t going to be anything like it might have been two years ago, I think that F9: The Fast Saga is going to be the first hit film since the arrival of the pandemic.

Dominic (Diesel) is learning to live the quiet life with Letty (Rodriguez) and her newfound memories and Dom’s little girl. The gang has been through a lot, and it seems like it’s time to kick back. Of course, that would be one boring film, and for a franchise built on 100% adrenaline, that’s not really going to work out for us. Dom gets a visit from an old friend from the feds to tell him that Mr. Nobody (Russell) is in trouble. He was on a plan transporting old villainess Cipher (Theron) and a dangerous weapon when his plane ran into trouble and crashed. He needs help. With this new weapon in the wrong hands, the world needs help, and Dom and Letty need to get the old band back together for another crazy globetrotting mission. Returning is Roman (Gibson), Mia (Brewster), Tej (Ludacris) and Ramsey (Emmanuel). They find the plane and almost recover the goods when they discover who is leading the bad guys. It’s a cat named Jacob, played by John Cena, who it turns out is Dom’s brother. Yeah, the one he never ever mentioned through seven movies while talking so much about family. This one might be hard to swallow, so we get treated to a rather rich back story about Dom’s family. We get to see him in his younger days helping his father who was a professional racer, and we see the event that caused the brothers to go their separate ways, and it’s strong enough that we get why Dom hasn’t ever told anyone. It’s one of the more interesting story elements of the franchise and is told through flashbacks throughout the film.

Not content with bringing back a bad chick like Cipher and a little bit of Mr. Nobody, we get some real surprises throughout the film. Han (Kang) is still alive and plays a crucial role in the crossing stories. As much as this film plays to the entire franchise, you should watch Tokyo Drift and Fast 6 for most of the goings-on here. That means that we also get a return from NCIS: New Orleans veteran Lucas Black as Sean. This time it’s more than merely a cameo appearance. If you stay for the credits, you’ll get to see another returnee and an actual payback to the end credit scene from Number 6. Yeah, if this all sounds a bit complicated, be sure to know that you can enjoy the film without knowing most of this. They’ll explain things. Of course, if you watch the entire franchise, you’re going to be treated to a lot more nuance here. I prepared by watching all eight films in 4K before I attended the screening. Yeah, it was a lot of work, but for you guys, I took one … or eight … for the team. I was tempted to skip Tokyo Drift because it really didn’t feature the team and only Dom in a cameo. I’m glad I didn’t, as it turns out.

The film takes the stunts and action to a completely new level. You may have heard that they even take a car into space. But there are so many really cool locations from all over the world here. This franchise has entered into James Bond territory and in recent years has surpassed the Bond films in box office take. If you have always been a bit put off by all of the crazy, impossible stuff that has happened over the years, you might enjoy the fact that this film pokes a ton of fun at that concept. Roman starts having some philosophical concerns about the fact they appear to survive impossible stuff without getting a scratch. Roman’s winking at the audience, to be sure, and I actually liked the fact that the film embraces the crazy and doesn’t try to run away from it at all. The films aren’t something you want to think about so much, and now they’re telling you they get that, and it’s OK. Just kick back and enjoy the ride.

Characters aren’t the only elements back for the ninth film. Justin Lin has returned after taking a few films off for James Wan among others. It makes a difference. The characters talk a lot about family, but this film feels more like family than any of the others. The years roll off the screen, and all of that time together is incredibly real because it is real. There’s a ton of chemistry to go along with all of the high-test excitement.

F9 is presented in its original aspect ratio of 2.39:1. The ultra-high-definition image presentation is arrived at with an HEVC codec at an average of 50 mbps. This time there’s a lot more color to the film. The previous entry was always dark and gritty. This one features wonderful jungle scenes and a globetrotting use of locations that really show up in this image presentation. Colors pop. Greens of the jungles with deep blue lake water are amazing. Establishing shots might as well have come from a beautiful travelogue. Detail is always nice, both in color and shine on the cars. This might be the most vibrant visually for the franchise, and it all shows up nicely here.

The Atmos track defaults to a really rocking 7.1 mix. Subs come alive completely from crashes and explosions to merely the roar of those engines. Again the audio presentation exceeds the film collection in the 4K box set. There was extra time as the film was delayed several times in its release for COVID, and it seems that time was well spent on production design, both in the audio and visual. The surrounds immerse you solidly in the action, and the dialog always cuts through splendidly. This is a show-off release for your system.

There is an Audio Commentary with Justin Lin which is exhausting in its detail. Quite complete and informative.

The extras are on both the UHD and HD Blu-ray versions but are all in HD with no HDR or Dolby Vision.

There is the theatrical cut and an 8-minute-longer Director’s Cut. I reviewed the new cut here.

f9 – All In: (45:23) This is a 9-part behind-the-scenes feature with a handy play-all option. They do these things for residual reasons. By breaking them up into smaller pieces, they do not have to pay residual money to all of the participants. Plenty of cast and crew insight, and you do get that family vibe they are always talking about. Of course, The Rock didn’t chime in.

Practically Fast: (7:52) there are a lot of computer-generated f/x here, to be sure. But there are also a ton of practical f/x where they really do mash up cars. That’s the focus of this behind-the-scenes feature.

Shifting Priorities: (3:59) The cast talk about family and in particular fatherhood here. Vin’s real son got to play the very young version of his character, and we meet the actors who played the young versions of Dom and Jacob.

Justice For Han: (3:37) The cast and crew talk about the return of Han, which started when fans were upset that Shaw didn’t suffer the consequences of what he did to Han. That also gets a course correction in a stinger scene.

A Day On The Set With Justine Lin: (10:00) We get a look at Lin’s long day of work during the shoot where he only slept three hours a night. He really does look beat here. It appears the script was never locked and shows that Lin allotted time each day to continue writing the film.

John Cena – Supercar Superfan: John Cena gawks at some of the cool cars used during the shoot.

This has been a bit of a troubled franchise of late. The cast were all a little upset that this film was delayed so that Dwayne Johnson and Jason Stratham appeared in a spin-off of their characters Hobbs and Shaw. It was tense on the set of the eighth film as Johnson ran afoul of Gibson and Diesel, causing both to make some pretty harsh public statements. It’s also the reason Johnson does not appear here. Of course, Paul Walker’s death during the filming of the 7seventh film changed that family dynamic. They still haven’t killed Brian in the series. Here he is said to be watching the kids while they do the mission. At the end his empty chair is alluded to and answered by his car zooming up the driveway. Finally, COVID long delayed the already delayed film and must have sunk a lot of spirits. But it’s finally here on home video. This is one of very few franchises to have films reach the billion dollar mark, and in normal times this one was sure headed there. But it did set new post-pandemic records and did very well. We all need a fun ride right now more than ever. This will be big. You heard it here first. Trust me. “Numbers don’t lie.”

Gino Sassani is a member of the Southeastern Film Critic's Association (SEFCA). He is a film and television critic based in Tampa, Florida. He's also the Senior Editor here at Upcomingdiscs. Gino started reviewing films in the early 1990's as a segment of his local television show Focus. He's an award-winning recording artist for Omega Records. Gino is currently working on his 8th album Merchants & Mercenaries. Gino took over Upcomingdiscs Dec 1, 2008. He works out of a home theater he calls The Reel World. Favorite films: The Godfather, The Godfather Part II, The Body Snatcher (Val Lewton film with Karloff and Lugosi, not the pod people film), Unforgiven, Gladiator, The Lion King, Jaws, Son Of Frankenstein, The Good, The Bad And The Ugly, and Monsters, Inc.
Young Sheldon Season 4 (Blu-ray) The Shawshank Redemption (UHD Blu-ray) (4K)