Posted in: Disc Reviews by Gino Sassani on November 11th, 2021 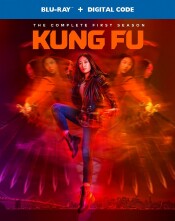 “My name is Nicky Shen, and this has been my home for three years. A Shaolin monastery in Yunnan Province, China. My mom sent me on a cultural tour of China. Turned out, it was really a matchmaking tour to land me a Chinese husband. Just one of the many ways my mom tried to control my destiny. I panicked. I ran. That was the first time anyone told me I had a choice in anything. I was only planning to spend the night. But then I saw something that I knew I wanted to be a part of. These women were warriors. And so I stayed. Pei-Ling became my Shifu, my mentor.”

The new Kung Fu series at the CW is not really anything like the 1970’s show that starred David Carradine. And while the credits claim to be based on that show, they really do not have anything in common. This show is not a period piece but exists in current day San Francisco. The titular character is no longer a middle-aged quiet hero or a guy. Instead we have law school drop-out Nicky Shen, a twenty-something woman who doesn’t quite have a handle on who she is. She’s not a wanderer, and she doesn’t play a handmade flute. She lives with her family and is totally connected to the modern from cellphones to Uber. That isn’t to say the show is bad. The production values are high, as are the writing and acting. The weak link for me is it’s given me flashbacks to Pretty Little Liars, as this show likely shares those adolescent girl demographics. So clearly I’m not the target audience. So otherwise, Mrs. Lincoln, how was the play? Warner Brothers Home Entertainment drops this reincarnated Kung Fu on Blu-ray with all 13 episodes on three discs.

Nicky Shen, played by Olivia Liang, has spent the last three years learning in a Shaolin monastery in China. She’s a natural to the teachings and develops a strong connection to the teacher Pei-Ling (Kai). One night the temple is invaded by another female warrior and her posse. The woman is Zhilan, played by Yvonne Chapman. She kills Pei-Ling and gets away with a mythical sword that the order was charged to protect. She severely wounds Nicky and practically burns down the sacred grounds. So where is Nicky to go now? And what is she going to do to avenge her mentor?

She goes back home to a family that hasn’t heard from her in three years. Her mother (Tan) is cold and unforgiving, while her father, played by the legendary Tzi Ma, is overjoyed to see her. It becomes obvious from the start that she had a close and special relationship with her father, while her mother has been hiding things about her family history that eventually fills in some blanks when the pieces start to come out. She’s just in time to help plan her sister Althea’s (Dang). Her parents own a Chinese restaurant that is coming under a cloud of trouble. Mom turned to a loan shark in the past, and now that note is past due. Lucky her daughter has crazy martial arts powers. Althea is a computer whiz and the show’s obligatory computer hacker, and she’s somewhat of what they call an influencer with tickets to the biggest parties. There is also a brother, Ryan (Prasida), who is a doctor and volunteers at the Chinese Community Center for people who can’t afford health care. She had an ex-boyfriend named Evan (Stenhouse) who is now an assistant District Attorney, so she uses his connections to get inside info to help in her crusade to help people. At the Community Center Library, she hooks up with  Henry (Liu).

Many episodes play out like an Equalizer episode. She sees someone in trouble, and she uses her skills to help them out of an impossible jam. That includes her family in more than one instance. But the majority of the episodes are steeped in a season-long mythology story arc. Zhilan is attempting to collect seven special weapons that contain great power. The sword was just the first. Complete, this collection can transfer all of their awesome power into a person who could pretty much rule the world. So she ends up trying to beat her to the next weapon, usually falling short at each turn. But there is still hope. The weapons need to be taken to a place called The Forge before they can have that energy transferred.  Nicky has burned markings on her hands from trying to wield the sword during the night of the invasion. These are all clues to the quest, so there’s a little Indiana Jones thing going on here. Along the way her mother finally reveals her secret, and Nicky’s quest becomes all-consuming. All the while there is a third party after the weapons and their power. He’s Russell Tan (Chan), and he heads a wealthy and powerful family. While the season story pretty much resolves with no huge cliffhanger at the end, we do get lead to believe that Tan is going to be the Big Bad of the second season.

Don’t expect those grasshopper teachings here. No flashback images here. Instead Nicky is either speaking to the spirit of Pei-Ling or having a mind-blowing series of hallucinations. These conversations are being held in the present. If you look quickly in the pilot, there is a humorous callback to those moments with Carradine.

Each episode is presented in its original aspect ratio of 1.78:1. I’m happy we were given the Blu-ray instead of the DVD. There’s a much greater atmosphere in HD. This is especially true with the stuff shot at the monastery in China. Colors really pop with nice reds, and the orange robes come alive with nice oranges and wonderful texture. Black levels are average and slightly better than seasons with more than five episodes per disc. Nice use of bandwidth. You should find this equal or more likely superior over broadcast and streaming.

The DTS-HD Master Audio 5.1 is there to service the dialog and set an atmosphere with the musical cues. Dialog always stands out, and the action scenes are pretty even throughout. No real sub action going on here, but again, better than television broadcast or streaming.

Kung Fu: Bond Of Honor: (16:21) Serves as a bit of an introduction and overview of the new series.

It’s a waste of time to make comparisons with the Carradine show or its later reboot. All we get is the name, and the comparisons simply end right there. Here the mythology is complicated, and you can’t miss an episode or you’re lost completely. The character development is pretty good, and there’s some chemistry here that improves as the season progresses. Next season I suspect will improve on the relationships, so you can put yourself in my shoes for the coming seasons. “I definitely have a head start this time.”

Gino Sassani is a member of the Southeastern Film Critic's Association (SEFCA). He is a film and television critic based in Tampa, Florida. He's also the Senior Editor here at Upcomingdiscs. Gino started reviewing films in the early 1990's as a segment of his local television show Focus. He's an award-winning recording artist for Omega Records. Gino is currently working on his 8th album Merchants & Mercenaries. Gino took over Upcomingdiscs Dec 1, 2008. He works out of a home theater he calls The Reel World. Favorite films: The Godfather, The Godfather Part II, The Body Snatcher (Val Lewton film with Karloff and Lugosi, not the pod people film), Unforgiven, Gladiator, The Lion King, Jaws, Son Of Frankenstein, The Good, The Bad And The Ugly, and Monsters, Inc.
L.A. Story (Blu-ray) Walker: Season One