Posted in: Disc Reviews by Archive Authors on May 18th, 2022 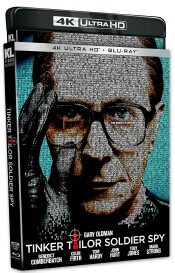 After watching Tinker Tailor Soldier Spy, my mind wandered over to Inception, of all places. Remember how Ellen Page’s character pretty much only existed so other people could explain to her — and, by extension, us in the audience — the rules of the movie’s universe and what the hell was happening? Well, watching Tinker Tailor Soldier Spy for the first time felt a lot like what I imagine Inception would look like if Page’s novice architect hadn’t been in the script: words and items have dual meanings, characters have double (and triple) motivations, and good luck figuring out everything that’s going on in this complex world! The plot, however, is deceptively simple: veteran spy George Smiley (Gary Oldman) is called out of retirement to uncover a Soviet agent in the highest ranks of MI-6, the British intelligence service. (I’ll refrain from further discussing the plot so that I don’t give anything away, but also because there’s a decent chance I haven’t comprehended everything that happened. That being said, my second viewing of this movie went considerably smoother than the first.)

Things only get complicated when you realize that almost every person presented on screen — with the notable exception of a shy schoolboy — is a spy or possesses a critical piece of intelligence. (It’s no accident that we never get a clear look at George’s wife, Ann.) As a result, the audience is constantly kept off balance, not knowing who or what to believe since every character harbors layer upon layer of secrets. The movie doesn’t explore the toll this takes on its characters, but it doesn’t have to: it’s plain to see in their resigned faces.

“Don’t you think it’s time to recognize there is as little worth on your side as there is on mine?”

The closest we have to an anchor in this story is the laconic and, at times, catatonic Smiley. As the former president of the “How Has Gary Oldman Never Been Nominated for an Oscar?!” club, I was honestly a bit taken aback that he finally got his recognition from the Academy for what is seemingly a pretty minimalist performance. Then I realized, my favorite thing about Oldman’s career has always been the way he disappears into any role, whether it’s Sid Vicious, Dracula, Lee Harvey Oswald, or Commissioner Gordon. In Tinker Tailor Soldier Spy, he just happens to disappear into the role of a man whose job it is to disappear into the background. His ironically-named Smiley spends most of his time listening and observing, but Oldman brings an impressive physicality to the character, who has an incredible economy of movement and never wastes a single word or gesture. It also makes his rare emotional outbursts more effective.

Of course, Oldman is just one part of the ridiculous amount of manly British talent in this ensemble. I was particularly impressed by John Hurt (a powerhouse in his few scenes), Benedict Cumberbatch (strong as Smiley’s right hand man), Tom Hardy (bringing a good dose of energy and emotion as a younger operative) and Oscar winner Colin Firth (whose impish charm was much appreciated in the otherwise bone-dry story). Kathy Burke is also fantastic in a relatively small role as a former colleague of Smiley’s.

I’ve never read John le Carré’s Tinker Tailor Soldier Spy novel, nor have I seen the TV series starring Alec Guinness as Smiley, but even if I had, I would expect Tomas Alfredson’s movie to be able to stand on its own. I believe knowledge of a movie’s source material should enrich or infuriate you during the cinematic experience, but it should never be a requirement. On this front, I’m not sure the movie entirely succeeds (and certainly not if you only watch it once.)

Alfredson — along with writers Peter Straughan and the late Bridget O’Connor (who were Oscar nominated for their script) — intentionally structures the movie in a way that sometimes makes the story downright incomprehensible unless you’re already familiar with the material. I’m not saying I need to have constant title cards identifying each character or what year it is, but the jarring shifts in time and the sheer volume of important players led to questions like “Which one is Esterhase again?” and “Wait, why is THAT guy alive now?” between me and my girlfriend. Instead of paying attention to what was going on, we were often trying to figure out what just happened.

I was more impressed by the director’s consistent use of tracking shots — courtesy of cinematographer Hoyte van Hoytema — that made it seem as if we’re spying on these intelligence operatives and heightened their sense of paranoia and loneliness. There are no major shootouts, explosions, or car chases. (Wait, come back!) Instead, Alfredson invites (rather than demands) the audience to take note of particular items or facial expressions, and process them the same way as one of these highly-trained operatives.

In fact, where Alfredson (who directed the similarly chilly Let the Right One In and is making his ambitious English-language debut) and company succeed brilliantly is in creating a spy movie that feels as if it could take place (or has taken place) in real life.

Tinker Tailor Soldier Spy is presented in its original aspect ratio of 2.39:1. The ultra-high-definition image presentation is arrived at with an HEVC codec at an average of 50 mbps. The Blu-ray of this film was always quite a strong image presentation, but there are some rather notable improvements here. The HDR doesn’t really add much to color here because the film is intentionally presented in soft, drab colors to create the essential atmosphere. But because this film often lingers in the shadows of little to minimal lighting the HDR’s ability to bring out strong contrast and superior black levels makes a very good image now a stunning one. When Oldman is delivering his sad soliloquy to Cumberbatch there is a severe close-up on his face that looks incredible now. The detail and reference flesh tones contribute significantly to the atmosphere of that scene. It helps a bit that this was shot on film giving it a native 4K source, and was also processed with a 4K digital intermediate platform.

The DTS-HD Master Audio 5.1 track is often as nuanced as the movie’s filmmakers and cast. The jazzy, Oscar-nominated score by Alberto Iglesias shines, but rarely intrudes. The movie doesn’t have much cause to lower the boom, but, just as impressively, background noises — like approaching footsteps, the low-rumbling of a train, or even the buttering of a piece of toast — are rendered through your speakers in a properly enhanced or subdued way (whichever the scene calls for). The dialog, however, is presented at a merely acceptable level. This is pretty much identical to the Blu-ray release.

Feature Commentary with director Tomas Alfredson and actor Gary Oldman: Alfredson kicks off the track by saying, “We will try to lead you through this film, which is too complicated without us.” What follows is a genial, low-key commentary between the two that, like the movie, isn’t afraid to go through significant stretches of time in silence.

Deleted Scenes: (6:08) Since the movie shuffles its timeline so much, it’s almost impossible to guess where the majority of these scenes — played as one continuous track — belong. Still, if you’ve ever wanted to see Gary Oldman fry an egg in real time, this special feature is for you!

Tinker Tailor Soldier Spy: First Look: (13:00) A slight cut above the average behind-the-scenes doc, featuring most of the cast and le Carré, who speaks briefly but eloquently about his connection to Smiley.

John le Carré Interview: (31:48) The author expands on that connection in this conversation, presented in HD, that also covers his own career at MI-6. In fact, this chat alone is more interesting than the other batch of interviews put together.

Interviews with the cast and crew: (24:43) Oldman, Firth, Hardy, Alfredson and co-screenwriter Straughan talk about the script, the greatness of their fellow cast members and memorable moments on set. Of particular interest is Oldman revealing he wanted to play up Smiley’s cruelty in comparison to Guinness’s performance.

If James Bond has his Walter PPK handgun and Aston Martin, then George Smiley has his … glasses. Obviously, condensing a hefty novel — that previously inspired a seven-part miniseries — into a single, feature-length film wasn’t ever going to be an easy task, so it’s no surprise that sitting down and watching this movie isn’t exactly smooth sailing. Still, the film features strong performances and an impressively cinematic approach to material that could easily look mundane. Most importantly, I suspect Tinker Tailor Soldier Spy actually plays better on Blu-ray — where you can rewind and re-watch at your leisure — than it did in theaters.

Parts of this review were written by J.C. and Gino Sassani