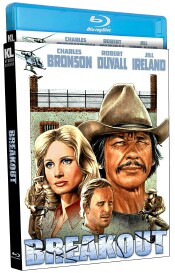 The year of 1975 was an interesting year.  I was born, Jaws was the top grossing film of the year, followed by One Flew Over the Cuckoo’s Nest.  Other interesting films included Return of the Pink Panther, Three Days of the Condor, Rollerball, and The Adventure of Sherlock Holmes’ Smarter Brother.  Somewhere after those films and others, we have a film called Breakout, which featured the action star Charles Bronson.  Fresh off his greatest film, Death Wish, Breakout would be one of the three films with Bronson that would come out during 1975 (other two being Hard Times and Breakheart Pass).  In Breakout, we explore the topic of prison escape.  Let’s make sure this one gets out with good behavior.

Mexico, 1971.  A bus drives through a small town.  Inside the bus are a couple of prisoners who are smiling at each other while two guards watch over them.  One of the prisoners hands over a bribe to the guard.  The guards hand them  some clean clothes.  The bus stops and the guards get out.  The prisoners also get out thinking their freedom is soon at hand.  The first prisoner runs off into the desert.  The guards hand the second prisoner a gun and tell him to shoot the first prisoner.  He shoots twice wildly but the third (and the fourth gunshot) hits him square in the chest, killing him.  Elsewhere, a briefcase is exchanged between two men and they shake hands.

Santiago, Chile.  We arrive at the Transpacific Fruit and Steamship Corp.   Jay Wagner (played by Robert Duvall) is leaving for a few days, and his wife, Ann (played by Jill Ireland) doesn’t want him to go.  Suddenly, two police cars come onto the property.  The cops get out and tell him that he is under arrest for Enrique Cardoza’s murder.  Jay doesn’t know what the cops are talking about, and he is soon taken away to stand trial.

New York City, NY. There is a meeting at the Transpacific HQ between Harris Wagner (played by John Hutson) (Jay’s grandfather) and Cable (played by Paul Mantee) (who we saw in the briefcase exchange scene), a CIA agent who talk about the framing of Jay and his arrest in Santiago, the framing due to the fact that he is pushing for stronger worker rights.  He will be extradited to Mexico City, and have a “proper” trial.  Harris makes sure to tell Cable that under no circumstances should Jay be murdered. He is to remain alive.

Mexico City, Mexico.  Jay Wagner is convicted for a crime he certainly didn’t commit and is sentenced to 28 years in prison.  He is allowed conjugal visits and is soon visited by his wife, Ann.  She hands him some money so that Jay can buy his freedom.  Later, he hands the cash to a guard near his cell.  However, the freedom he thinks he is buying isn’t all that it is cracked up to be.  Ann will need to resort to other means in order to free her husband.

Ann Wagner goes the route of unscrupulous means when she hires Nick Colton (played by Charles Bronson) to rescue her husband.  Nick, along with his buddy, Hawk Hawkins (played by Randy Quaid) devise a plan that hopefully will make them a lot richer and meanwhile save Jay Wagner from rotting in jail for the rest of his life.  But they have to make sure they will stay alive at the same time.

There is always a certain charisma that Charles Bronson brings to the screen even when the material is somewhat in doubt.  I mean, the lines aren’t the greatest, and the movie has more holes than Swiss cheese, but he manages to carry the film quite admirably.  A lot of this help is due in part to Robert Duvall, Randy Quaid, and other actors who did more than their fair share.  Even a role like Sosa (played by Jorge Moreno), who is Jay Wagner’s cellmate, gets sufficient time to be fleshed out and is given some character development.

All of this acting prowess does help to look through the film’s shortcomings, mostly in the script department.  For all of the character development, there are scenes and moments which don’t quite add up.  Another thing that doesn’t quite work for me is the use of Bronson in this film.  It’s one of those cases where he was one of the premier action stars of that time, so let’s drop him into the role even if he doesn’t fit.  Of course, they kept trying to peg Charles Bronson as a Native American (see Chato’s Land, Apache, etc.) often during his career, so being a wily Texas bush pilot probably didn’t seem much of a stretch.

This movie is filmed in a 2.35:1 widescreen format.  I was really wowed by the presentation here from Kino.  Interestingly enough, the film was not shot in Mexico due to the story portrayed, and the prison scenes in particular were shot in Fort de Bellegarde, Le Perthus, France.  This is all shown wonderfully with the right amount of grain and colors of the countryside.  They really pop, and the print was cleaned up quite a bit.  It still feels like a 1970’s film, but with the right adjustments, it breathes new life into the film.  I admit I did not expect the effort put forth here.

The sound to this film is presented in DTS HD 2.0 Master Audio in English and also has English SDH subtitles.  Dialog is clear and intelligible, and there should be no issues here.  The score by Jerry Goldsmith flows beautifully and blends well with the film.  Sound effects are loud and in your face, which will thrill the action fans.  There really isn’t much to complain about.  The only negative was that any Spanish in the film is not subtitled, which seems to be a semi-consistent problem with Kino titles and subtitling anything that’s not the original language.

For those interested in the soundtrack, it was released a long time after the film on CD in Belgium. It was limited to 2500 copies, and you can probably score one for around $30 (once you factor in shipping, currency conversion, etc).

Audio Commentary by Film Historian Paul Talbot; the Author of Bronson’s Loose! Books: We get a full length commentary here from Paul who tells us everything we need to know about Bronson and then some.  The commentary actually listens like the reading of an encyclopedia, but it is chock full of information.  Once you get used to the format, it’s not bad at all, but I do wish it had been a little slower and more anecdotal so that I could enjoy it more.

Michael Ritchie was cast as the original director to this film.  However, he did not want to cast Jill Ireland as the lead female.  For those who did not know, Jill Ireland was Charles Bronson‘s wife.  Charles threatened to leave the set if his wife was not cast.  Therefore, Tom Gries was brought in to direct the film, and Jill played Ann Wagner.  Charles and his wife would end up doing fifteen films together, so this wasn’t the last time Mr. Bronson flexed his casting muscle.

The disc is well made by Kino and has great video and wonderful audio to boot.  The commentary, while dry, is good enough to get a lot of interesting information on the film as long as you can get used to the delivery.  The trailers and radio spots for Breakout were also interesting in how they used various scenes (and voice-overs) to really drive the plot home, so I’m very happy to see them included here.  Overall, I certainly recommend this film, as this was one of Bronson’s better films and gave a certain comic flair to Bronson that many of his other films were deeply missing.  Enjoy.

Michael Durr has been reviewing movies for the better part of fifteen years now. He primarily enjoys thrillers, sci-fi, animation and even a little courtroom drama. His favorite films include Escape from New York, the Goonies and anything with Alyssa Milano. When he’s not praising Kurt Russell as the greatest actor of our time or scratching his head over a David Lynch flick, he’s spending time at home in Texas with his lovely wife, Lori and his amazing son. How they put up with him is a mystery, but even Basil Rathbone doesn’t have the time to solve that one.
Pushing Hands (Blu-ray) Tinker Tailor Soldier Spy (UHD Blu-ray) (4K)