If one thing can be said about Michael Bay films, it would be that they are beautifully shot. I cannot think of many directors’ that have such a unique cinematographic feel to their films… and Pearl Harbor is no exception. This film contains some of the best fighting sequences ever put onto film. Unfortunately, this fabulous action is tainted by a sub-par love story that is interwoven into the story. With the elimination of this love story, Pearl Harbor would have been an amazing action film…with a reasonable length of 120 minute (rather then its 180+ minute running time). This Director’s cut of Pearl Harbor showcases an extra 1.5 minutes of footage… mostly extra gore and graphic war sequences. If you are looking for a noticeable amount of extra footage, you may be disappointed. Enough for my ramblings… here is a bit about the story:

“Two childhood friends, Rafe McCawley (Affleck) and Danny Walker (Hartnett), had always shared a passion for flying, which leads them to join the United States armed forces in the early 1940’s as the rest of the world was becoming embroiled in World War II. Eager to participate in combat, Rafe feels compelled to join the British, leaving his girlfriend, army nurse Evelyn Stewart (Beckinsale) behind. She and Danny are later transferred to the tropical base at Pearl Harbor, Hawaii, where they eventually find out that Rafe was shot down in combat in Europe. Eventually Danny and Evelyn move on and become romantically involved, but their happiness is cut short by Rafe’s unexpected return and the surprise attack on Pearl Harbor that changed the course of history forever.” – Buena Vista

This is one of the best sounding DVD’s I have ever heard. Sure, it is not detailed in the subtle nuances of film, but does this soundtrack ever rock! The sound is deep and load… involving the listener in every possible way. The soundstage is filled from every possible angle, and the sound dispersion and focus are right on. Dialog is clear and focused, and the bass is as deep and clean as it comes. Both the DTS and Dolby Digital 5.1 audio tracks are outstanding. If you are a fan of BIG sounding films, you will really enjoy this DVD.

As is the case with the audio on this disc, the video is equally outstanding. The colors are bang on, and the darks are deep and clean. The transfer is free of all print damage, pixilation, edge enhancements, and grain. You can tell that a lot of care has gone into the DVD transfer of this film. The 2.35:1 Anamorphic Widescreen transfer is beautiful, and is a nice reference piece for the joys of widescreen (an Easter egg on disc one outlines the negative effects of “cropping” the film to fit a standard 4:3 TV screen).

If you have even wondered how a big-budget film was made… look no further. This DVD set contains so many special features that they span two complete discs. As you can imagine, critiquing every feature on a four-disc set is quite a feat. Since this feat is near impossible, we offer a summary of features instead…

Not only does this disc contain more special features then the average person could ever sort through, it also contains the smoothest menus I have ever seen (in terms of navigation and flow), and some of the most unique packaging ever to hit the world of DVD. 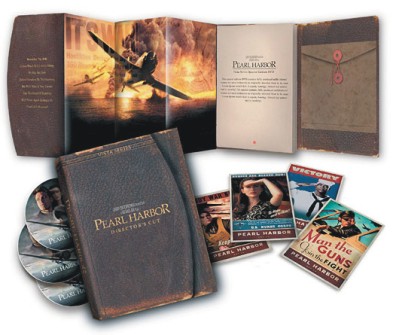 Yes, this film did not live up to all of the hype surrounding it, but this DVD sure has. The entire DVD presentation is near perfection. Not only are the audio and video amazing, the special features are absolutely complete, the menus are a smooth as they come, and the packaging is extremely unique. What more can I say… Everyone should own this DVD!

Gino Sassani is a member of the Southeastern Film Critic's Association (SEFCA). He is a film and television critic based in Tampa, Florida. He's also the Senior Editor here at Upcomingdiscs. Gino started reviewing films in the early 1990's as a segment of his local television show Focus. He's an award-winning recording artist for Omega Records. Gino is currently working on his 8th album Merchants & Mercenaries. Gino took over Upcomingdiscs Dec 1, 2008. He works out of a home theater he calls The Reel World. Favorite films: The Godfather, The Godfather Part II, The Body Snatcher (Val Lewton film with Karloff and Lugosi, not the pod people film), Unforgiven, Gladiator, The Lion King, Jaws, Son Of Frankenstein, The Good, The Bad And The Ugly, and Monsters, Inc.
Alien Devil’s Backbone, The