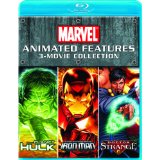 In my comic travels, I usually do not read the really popular heroes. Sure I have read Spider-Man, SuperMan or Batman but if you had to ask me my favorites, it would not be among these three. My favorites include the likes of Daredevil, Robin (any of them pretty much) along with Conan and others. It just so happens that this three pack before me today includes another couple of favorites of mine. The Incredible Hulk and Dr. Strange. That and it also includes yet another origin story on Iron Man. Let us see how it looks.

(*Note: some of this material is re-used from not only my Planet Hulk on Blu-Ray review but also the Avengers 3-pack I reviewed earlier this week. These are the same discs previously provided by Lionsgate just in an amazing value 3-disc package. Yes, Planet Hulk did lose its digital copy, you will live*)

Planet Hulk
Hulk is stronger than ever but as a result, he is too huge of a threat for the planet Earth to contain. The New Avengers (Iron Man, Doctor Strange, Reed Richards and others) have decided to send him away to an abandoned planet. The Hulk wakes up and finds himself in a rocket while listening to words of Iron Man. The Avengers send Hulk into space into what they believe to be a planet devoid of life. Unfortunately, the rocket passes through a strange portal and lands up on the planet Sakaar.

Once Hulk finds himself on the planet, he is attacked by a native insectoid race and soon captured by Sakaar Imperial Guards. Soon, he finds himself in a coliseum where his only choice is to fight to the death. But there are people to help him including one member of the resistance called Lavin Skee. Teamed together with a shadow priest, insectoid and a rock monster among others, this motley crue must take on an ever challenging group of foes in a hope to eventually win their freedom.

Dr. Strange
Dr. Stephen Strange is regarded as one of the most gifted surgeons on the planet with an ego to match. Late one night, he sees a quite horrific display as Baron Mordo and fellow sorcerers take on a deadly monster of magic. The odd part is a member of the group named Wong is using spells that should shield ordinary humans from seeing the display. Stephen tosses it off as stress but finds the story take another turn when he visits a fellow doctor who is complaining about children falling into comas with very terrible nightmares.

Stephen Strange tells the doctor that he can’t help the children and drives back home. However, on the way home he sees a strange flaming symbol in front of him which causes him to crash. The worst part is that he loses the gifted function of his hands. He will never be able to be a surgeon ever again. A chance meeting with Wong leads him to the country of Tibet where he believes he will get his hands back. In reality, he has found the home of the Sorcerer Supreme. Now, there is more at stake than a surgeon’s hands, but the fate of the whole world.

Invincible Iron Man
Under the leadership of Tony Stark (from very far away), James “Rhodey” Rhodes and a team are attempting to raise an ancient Chinese City. However, after repeated attacks from the Jade Dragons, most of the men are killed and Rhodey is captured. But a visit from Tony to the excavation site only leads to his own capture. Actually, it more accurately leads Tony to near demise, only being saved by Rhodey and a Chinese Shaman. Stark’s heart and life lies in the balance.

We learn that the Dragons seek to prevent the return of the Mandarin, a ruler from three thousand years ago who ruled China. The excavation site just happens to be the Mandarin’s palace. He requires four rings which are held in four corners of the earth. Brought together, he will rise again. Tony is forced to create a weapon that will sink the city. But there is more to this story than meets the eye. A fellow member of the Dragons, Li Mei holds a very special purpose. As it turns out though, Tony might indeed be the “Iron Knight” that the prophecy is searching for.

Doctor Strange is also another strong movie as we learn very early on why he is so cold, why he is such an arrogant jerk. It is through that fuel and desire that we start to empathize with the character. I am still calling shenanigans on how he gets to of a Tibetian mountain with near broken hands and no climbing gear but we will let that one slide because of the awesomeness of the other 90 minutes. The characters are strong, the action is just a little lacking until the end.

The last of the features is Invincible Iron Man. Perhaps I have seen too many origins of Iron Man from live action to animated but this one just felt wrong from beginning to end. I love the idea of the Mandarin and I look super forward to him to his rumored appearance in Iron Man 3. But here, he felt lifeless and the only thing going for this feature is Rhodey who is terribly mis-used as well. Every character felt pithy and what’s worse we get a way too convenient ending to boot.

The video is presented in 1.78:1 widescreen at 1080p. The animation in all three of these features is a mixture of mostly hand drawn 2-d animation for needed areas of emotion and then some cgi spots where we need a heavy dose of detail and visual spectacular. It really works for the most part and the color is excellent. Since there is so much going on in all of these films, it is nice to see that the animation keeps up and the scenes never stop giving.

The audio for all three of these movies is 7.1 DTS-HD English Master Audio in English (5.1 Spanish Track is also included for all features, and I think they threw in a basic 5.1 English track as well). I will say it once and I will say it again. Bless whoever does the sound for Marvel Comic Animated Features. Big, bombastic and sure to leave you a little deaf in the proceedings. Dialog is nice and crisp and the sound effects make you sometimes forget that you are in the middle of a cartoon. English SDH and Spanish subtitles are provided for all movies.

If you have made to the end of this review, I congratulate you. Seriously. This took me a couple more days than I was hoping for because there is just so much to write between these three movies. This 3-pack is a tale of an amazing feature in Planet Hulk, an above average effort in Doctor Strange and a very poor Invincible Iron Man. Planet Hulk is so much done right that it honestly deserves a sequel which it has not seen the light of day. Let’s also hope that Doctor Strange gets more than random appearances in future animated Marvel cartoons.

The video and audio is perhaps the most significant and well developed piece of this pack. They both shine a ton and I just can not get enough of 7.1 tracks. They make gush with enjoyment. Too much information I know. The extras are indeed numerous, especially on Planet Hulk but relevancy can be seriously questioned on quite a few. I give this a solid recommendation, much like the Avengers 3-pack on the basis of value. This set goes only for $15 on Amazon and other fine retail outfits. At that price, any serious Marvel lover should jump on this in a hurry. Enjoy.

Michael Durr has been reviewing movies for the better part of fifteen years now. He primarily enjoys thrillers, sci-fi, animation and even a little courtroom drama. His favorite films include Escape from New York, the Goonies and anything with Alyssa Milano. When he’s not praising Kurt Russell as the greatest actor of our time or scratching his head over a David Lynch flick, he’s spending time at home in Texas with his lovely wife, Lori and his amazing son. How they put up with him is a mystery, but even Basil Rathbone doesn’t have the time to solve that one.
The Raven (2012) 11-11-11:The Prophesy