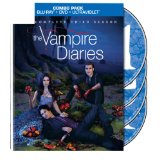 “If there’s a theme, you could call it The Return…”

The series takes place in the mythical Mystic Falls, Virginia. The town is celebrating its 150th anniversary. It’s one of those towns that never strayed far from its roots. The predominant founding families still live there. They still control the positions of power in the town. While they celebrate their heritage, the founders are still hiding a 150-year-old secret. The town was once full of vampires, and the founders rose up and attempted to kill off the creatures. Since that time they have kept some vigilance, passing down the secret only to those on the council. As our series begins, it just might be time to dust off those stakes, because the boys are back in town.

The “boys” are the Salvatore Brothers. Stefan (Wesley) has returned to Mystic Falls because of an 18-year-old girl who lives there. She is Elena Gilbert (Dobrev). She has recently lost her parents in a car accident, and she and her brother Jeremy (McQueen) are trying to get by. But Stefan’s interest goes back quite a few decades. Elena is the splitting image of Catherine, the vampire who turned him, and with whom he was deeply in love. But Stefan wasn’t the only man in love with Catherine. Enter Brother Damon (Somerhalder). The two brothers have been rivals from the time Catherine left their lives. Stefan tries to drink only animal blood. It sustains him, but makes him weaker than the average vamp. Damon feeds on humans, killing without remorse or hesitation. He’s here to make Stefan’s life miserable … and, of course there’s Elena/Catherine.

Stefan and Elena become romantically involved, bringing Elena into his secret world. She has a morbid fascination with their world and a belief that both Stefan and Damon can be redeemed. Her best friend Bonnie (Graham) a witch. Her powers will definitely come in handy from time to time here. With the death of her parents and Aunt Elena and Jeremy rely on old family friend Alaric (Davis). He’s also the local history teacher. The team also includes former teen Queen Caroline (Accola) who has finally learned to deal with being a vampire herself. She’s also the daughter of the town sheriff (MacIntyre). Caroline’s boyfriend is a werewolf Tyler (Travino) who is the son of the Mayor (Pralgo). Then there’s Matt (Roerig) who is theonly normal human in the “Scooby Gang”. Of course, his sister was a vampire and is now dead.

The cast here is exceptional from top to bottom, but I really have to talk about Ian Somerhalder. We last saw him as Boone on Lost, and he was pretty good on that show. He wasn’t near the best, however. Here he absolutely is. One of the skills that Somerhalder has learned well is his ability to act with his eyes. There are very few actors who ever master that to this level. Carroll O’Connor was one of the best in that regard. He’s the bad guy at times, the good guy at others, and it’s a very complicated role. So, why does it look so easy? There’s not a weak link in the lot, but he shines far above the already excellent work on display by this cast. There is great chemistry here. This looks like the kind of cast that are into their third or fourth season. They click on all cylinders. It’s amazing how quickly they became this well-oiled machine.

Every vampire film owes quite a bit of its mythology to the Dracula novel and films. Most of the common ones developed there have been the basis for the creatures ever since. Here are the rules for The Vampire Diaries:

Things that don’t work: Vamps do reflect in mirrors here. They can eat garlic. Crucifixes and holy water have no ill effects. They do not turn into bats or anything else for that matter.

Things that do work: Vamps must be invited to enter a home where a human lives. Wooden stakes, and bullets, can very well end a vampire. Burning and decapitation also do rather nicely to end your vampire problems. These vampires can do the Jedi Mind Trick, but Stefan really can’t do it well when he only drinks animal blood. The show calls it compelling. Sunlight will kill a vampire, but some, including the brothers, have bewitched rings that allow them to tolerate sunlight.

The show’s kryptonite is a plant called vervain. Vervain will make vampires weak in its presence. It’s a great protection from the Jedi Mind Trick. It can be incorporated in jewelry or even consumed to have the benefit of its protection.

“This is going to be an amazing year.”

In season 2 we met two “original” vampires. These are the guys who are the first vampires ever. Elijah (Gillies) is the first one we meet. He offers Elena a deal to protect her loved ones if she remains safe for the eventual sacrifice. The real big bad comes in the form of Klaus, who is at first the form of someone we know and eventually played by Joseph Morgan. He’s the strongest vampire there is, and he wants even more power. He’ll figure in the season’s big climax, and expect him to be a thorn in our heroes’ sides for a long time to come. He’s a corrupting force for Stefan, and thus we have a season finale cliffhanger when Stefan promises to go with Klaus in order to save his brother.

Enter Season 3. Stefan and Klaus have been on a tear across the country. Stefan has returned to his bloodlust days when he was once called The Ripper because of the savage way that he killed. The two are leaving mangled bodies in their wake which Damon and Alaric have been following. Of course, they’re keeping all of this from Elena.

Klaus wants to build an army of vampire/werewolf hybrids like himself, but he doesn’t know that he can’t because Elena is still alive. Her blood held the key to his spell. What he’s about to learn is that she’s more useful alive. It’s her blood that actually can create the intended beasts. But Klaus isn’t alone this season. He’s been carrying the bodies of the other original siblings in coffins. When Stefan steals these bodies it begins a war between Klaus and our heroes for a large part of the season. That is until the originals are awakened along with their mother who created them in the first place.

Meet the original family. You already know Klaus and Elijah from season two. Now you get to see the others. Of the rest of the originals the largest role goes to sister Rebekah (Holt). She’s a bit of a spoiled brat and has been asleep for the last 90 years. She’s loyal to Klaus but that could change as she learns his dirty little secret. Fin (Zafer) and Kol (Buzolic) don’t get much screen time. Their revived mother is Esther (Evans), and she wants to undo the horror she’s brought into the world. Their father is Michael (Roche), whom we’ve met before as a strong vampire hunter.

As the opening line suggests, this is the year of the return. Jeremy can now see ghosts. That means he gets to talk with some old favorites who had come and gone. There’s also an episode that brings everyone back for a short time. It’s a great moment to see the likes of Rose (Cohan), Anna (Jow), Vicki (Ewell) and Lexi (Kebbel).

The Vampire Diaries is presented in its original 1.78:1 aspect ratio. The 1080p image is arrived at with an AVC MPEG-4 codec. Warner has done things right by providing only 6 episodes on a disc. That means a solid high-definition image presentation. Most impressive are solid black levels that allow a lot of shadow detail on the many darkness scenes. Colors are not flashy but are quite strong.

Stefan’s Descent Into Darkness: (9:56) cast and crew talk about the crazy ride for the Stefan character this season. He’s gone about as dark as a “good” character can go. Give the actor credit for pulling it off.

The Original Vampires – The Beginning: (21:49) This feature explores vampire lore and does some comparisons to the lore of the show.

The Producer’s Papers: (23:12) This is a three-part production feature. You get a handy play all.

Favorite Scenes: These are commentary tracks for a few of the cast and crew’s favorite scenes.

You also get DVD and Digital Copies of EVERY EPISODE!

With so much time between releases, I find myself really needing a recap. Unfortunately, there are elements of True Blood that get mixed up in my head over the year wait. Certainly, these are distinct shows, but they do also share some common ground. I tend to like Vampire Diaries better. I think the story is more fleshed out and the characters are more compelling overall. Then again maybe it’s just a sign of age. “That happens after too many decades of being alive.”

Gino Sassani is a member of the Southeastern Film Critic's Association (SEFCA). He is a film and television critic based in Tampa, Florida. He's also the Senior Editor here at Upcomingdiscs. Gino started reviewing films in the early 1990's as a segment of his local television show Focus. He's an award-winning recording artist for Omega Records. Gino is currently working on his 8th album Merchants & Mercenaries. Gino took over Upcomingdiscs Dec 1, 2008. He works out of a home theater he calls The Reel World. Favorite films: The Godfather, The Godfather Part II, The Body Snatcher (Val Lewton film with Karloff and Lugosi, not the pod people film), Unforgiven, Gladiator, The Lion King, Jaws, Son Of Frankenstein, The Good, The Bad And The Ugly, and Monsters, Inc.
Private Practice: The Complete Fifth Season Titanic (Blu-ray 3D / Blu-ray)