Posted in: Disc Reviews by Archive Authors on December 17th, 2021 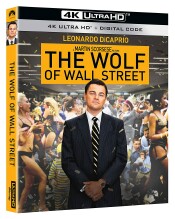 If that sounds like overly blunt, motivational mumbo jumbo, you’re not too far off. The Wolf of Wall Street is based on a memoir by Jordan Belfort, who currently makes his living as a motivational speaker and author. The film takes us back to the days just before the stock market crash of 1987 and chronicles his lucrative, hard-partying days as the founder of Stratton Oakmont, which dealt in undesirable penny stocks and defrauded its investors. (Think Boiler Room.)

I know I used the phrase “hard-partying days” in the previous paragraph, but I still feel like I’m underselling the level of debauchery depicted in The Wolf of Wall Street. Before the movie takes on a more chronological structure, we briefly meet Jordan (DiCaprio) at the point of his life where he’s achieved everything he’s ever wanted. Through some wicked, zippy voiceover narration, we also learn he loves drugs. Whether they’re making his back feel better, or he’s snorting them off whatever surface/body part is available to him, Jordan can’t get enough. That “more, More, MORE!” attitude spills over from the story and douses everything about The Wolf of Wall Street, including its supersized cast of characters and its 179-minute running time. (The four-hour version of Wolf officially joins the fabled four-hour cut of Gangs of New York in film lore.)

Of course, the uproariously funny Wolf script breezes right past that sort of buzz-killing idea whenever it creeps into the story. (Jordan’s self-absorbed narration barely slows down long enough to acknowledge a partner’s suicide or a close associate’s heart attack.) Some eyebrows were raised when the Golden Globes slotted The Wolf of Wall Street into its “Comedy or Musical” category. However, the film’s energy comes from the way it manically remixes Scorsese’s filmography (particularly Goodfellas and Casino) into a grand farce. The crooks in Wolf may not blow up cars or stab/shoot people in car trunks, but Scorsese is still telling an organized crime story.

You might say this is overly familiar ground for Scorsese, but why should Robert DeNiro be the only one allowed to revisit a classic Scorsese film this past Christmas? (Heck, Wolf even has a randomly lavish set piece that vaguely reminded me of the watery finale in his Cape Fear remake.) You’d also be missing the fact that Scorsese hasn’t worked with this much unrestrained verve in a long time. Most of The Wolf of Wall Street plays out like the kind of gonzo films Oliver Stone made after the relatively straightforward Wall Street. (The slimy buffoons in this movie will make you want to run and hand all your money to an upstanding guy like Gordon Gekko.) The highlight is a mind-bending sequence when Jordan takes a potent Quaalude and enters a “cerebral palsy” phase. Scorsese and his legendary editor Thelma Schoonmaker allow this sequence — and several others in the film — to go on for a luxuriously extended period of time. (Remember…more, More, MORE!) Although it’s not nearly as noticeable as it is in the exquisite work David O. Russell did with the 1970s in American Hustle, Scorsese expertly captures the manic, hedonistic vibe (as well as the big suits and occasionally garish ties) of Wolf’s late ‘80s/’90s setting.

I suspect some of the riffs from the cast could’ve been trimmed down, but I also get the sense Scorsese was inspired by the live-wire work he was getting from his leading man and the rest of the actors. Simply put, DiCaprio has never been more exciting. Since Titanic, he has mostly targeted adult dramas made by interesting directors while avoiding any sort of franchise film. That also means we haven’t exactly seen him have a lot of fun on-screen. If last year’s Django Unchained was DiCaprio taking a walk on the cinematic wild side, then Wolf is him getting a running start and jumping in head first. More than once, Jordan wanders around in a druggy haze and absentmindedly fondles a woman’s chest or pats a guy on the backside; it’s as if DiCaprio is allowing himself to feel these things for the first time as an actor.

Although they tend to run a bit long, some of the best scenes in Wolf are two-person acting duets that feature DiCaprio partnering with Hill (who continues to be a revelation as comedic actor with a dramatic edge), Kyle Chandler’s ultra-principled FBI agent (canny casting after Chandler played the ultra-principled football coach on Friday Night Lights) or Margot Robbie (in a head-turning performance) as Jordan’s second wife. (Jordan is a lousy husband, but the film establishes that neither of his wives are what you’d call pushovers.) Scorsese also sprinkles in actor/directors like Rob Reiner (funny as Jordan’s hothead dad), Jon Favreau (underused as Jordan’s lawyer) and Spike Jonze (thoroughly amusing as an early admirer of Jordan’s) into the cast, which isn’t surprising since Marty himself occasionally hops in front of the camera.

There are several instances in The Wolf of Wall Street where it looks like the chickens are going to come home to roost for Jordan and Co. By sticking it out each time, both Jordan and the film itself threaten to stay at the party for too long. The tricky mix of exhilaration, emotional emptiness, and exhaustion, one feels at the end of a wild ride like Jordan’s is tough to pull off. But, in Scorsese’s hands, “we’re in first class.”

The Wolf Of Wall Street is presented in its original aspect ratio of 2.40:1. The ultra-high-definition image presentation is arrived at with an HEVC codec at an average of 50 mbps. While it’s true this was one of the first films released completely in digital to theaters, it was shot on film, and that means it’s native 4K, although likely from a 2K intermediate. Still, the atmosphere of the film is captured beautifully here. Gone is some of the bright exterior crush that existed on the original Blu-ray, and the film’s grain remains intact. HDR doesn’t really brighten the colors, but it brings out the reference colors that you likely saw in the theatre. Black levels are nice and inky, and shadow definition adds some new depth to that “ludes” scene. The detail is a jump up, and that brings out many of the period textures throughout the film. (Jordan’s blue suit, for example, stands out a little more among the sea of business attire when he’s addressing his rowdy troops.) The image also neatly switches aspect ratios a few times, usually to replicate the full-screen format of Jordan/Stratton Oakmont’s commercials. Black levels are deep and impressive, particularly during the harrowing boat trip. (Conversely, Donnie’s white teeth are appropriately resplendent.) Close-ups offer a terrific amount of detail, whether we’re looking at a ragged, hungover face or the fabric of a $2,000 suit. The Wolf of Wall Street isn’t exactly anyone’s idea of a visual spectacle, but this Blu-ray does a great job of displaying why Jordan’s opulent lifestyle was so intoxicating.

The DTS-HD Master Audio 5.1 track is not quite as aggressive as you might expect from the movie that entered the profanity record books for its coarse language. Don’t get me wrong: the ambient, angry chatter can be heard pouring out of the surround speakers during any office sequence; it’s just more understated than I expected. Nevertheless, this is a very well-balanced track where the dialog and songs (from the likes of Bo Diddley, Billy Joel, and Cypress Hill) coexist easily, even when they’re both exploding. The track also swells nicely during any big office scene — especially if it features McConaughey’s chest-thumping “Money Chant” — and makes its biggest splash during the disastrous boat trip. Overall, the audio presentation isn’t as immersive or detailed as I hoped, but it’s still a strong, powerful effort. Pretty much the same as the Blu-ray release.

The Wolf Pack: (17:01) This behind-the-scenes doc, presented in HD, is sadly the only special feature on this disc. At least it’s a decent one. The format for this featurette is straightforward — cast and crew saying complimentary things about one another — but some of the comments are more insightful than the usual platitudes. For example, Scorsese talks about how important it was to make Jordan’s lifestyle seem like a ton of fun, because, well, Jordan and his guys had a ton of fun! (It’s not clear when this featurette was filmed, so I can’t say whether this was a response to critics who said the film glamorized and endorsed this lifestyle.)

The actors talk about their freedom to improvise; I figured a lot of the material between DiCaprio and Hill was off the cuff, but I liked learning the great scene between DiCaprio and Chandler on Jordan’s yacht also featured some improv. Meanwhile, DiCaprio — who has now worked with Scorsese five times — says this is the most fun he’s ever seen the director have.

Running Wild: (11:21) This is pretty much a continuation of the first feature with too many repeated interview segments.

The Wolf Of Wall Street Round Table: (10:58) This feature has Leo, Marty, Jonah, and Terrance sitting at a table having a conversation about the film. There’s obviously someone asking questions or prompting the conversation, but we never see them.

Obviously, I think this polarizing film is fantastic. In fact, I believe The Wolf of Wall Street will become even more highly regarded in a few years, when there’s more distance between the film and the “controversy” its shock factor inspired.

Written by JC and Gino Sassani