Posted in: Disc Reviews by William O'Donnell on March 27th, 2013 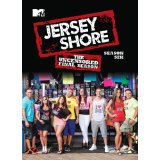 Jersey Shore finally comes to an end. Of course, there are spinoffs and TV specials and TMZ reports and aaaarggh! We’re never going to escape them are we?! This is an Uncensored version of the season so instead of ‘beeps’ we get to hear the versatility of the f-word and other assorted curse words that are flung across rooms and dance floors as these bronzed oddities continue their bitter stalemate against maturity and class.

(Much of what is about to be read is taken directly from my previous review of the last season of Jersey Shore because my feelings have not changed nor has my spite lost it’s relevance):

This show effects me like no other does. It is as if they have taken all of my worst memories from high school, bar encounters, or any other event where a person of less-than-stellar intelligence attempts to resolve a situation (NO! That is not a pun or reference to cast member “The Situation”) but it instantly becomes a shouting match completely devoid of perspicacity and often results in some sort of violence. Jersey Shore is a proverbial blooper reel of all the things I want to avoid in real life.

Fullscreen. As the cameras change so too does the quality. This has nothing to do with the tranfers, but just whether a camera had the opportunity to stage a scene, or if it simply something installed in the ceiling that runs all the time. Honestly, I think the lo-fiu cameras are used to try and give the show a more credible “reality.”

Dolby Digital English Stereo. Oh got, the shreeking! I must thank the good people at Paramount for having being charitable enough to not present this in surround sound. I don’t know if I could handle hearing the drunken howls of these people all around me. For what it is…the sound is decently clear.

Disc One
Gym, Tan, and Look Back: A cataloging of hook-ups and fights. Essentially the whole show in fast forward.

Deleted Scenes: If only they were ACTUALLY deleted.
Disc Two

After Hours (Merp Walk / Let’s Make it Official): This is separate show that resembles a talk show format where the cast members look at particular episodes and discuss them. The intellectual potential for these examinations, you can imagine, is boundless. The way that each episode is dissected becomes a soul-searching venture for all parties involved. If we all were blessed with the opportunity to examine our own lives the way the Jersey Shore people get to, then who knows how far we could push forward the evolution of our species? To reach new plateaus of enlightenment…to become closer to the cosmos…to become…oh…you got me. This is just more ego-stroking garbage from this band of do-nothing schlubs.

Breakdowns, Boobs & Bronzer: Virtually the same as “Gym, Tan, and Look Back.” More clips and low-lights (see what I did there?)

Jersey Shore Dictionary Special: A special episode dedicated entirely to the catchphrases of the cast. The fact that they filled a store with t-shirts of each catchphrase makes me pessimistic about our species. We can’t afford to provide blankets for the homeless but we sure as s#!t can put “Merp” on a hundred shirts.

After Hours (Awkward!): I’m just glad this remora of a show didn’t get its own release.

Jersey Shore Reunion: Another special episode that was originally broadcast live. The cast mates sit on a stage and prattle on about this and that and just burgle our time.

Most Outrageous Moments: Not anymore outrageous than the other special features that reflect on the fights and sex. I’ll give it this much, when it was going through Pranks, the one where the inside of the house was taken outside, and the outside taken in, that was pretty amusing. That’s right. ONE thing on this show genuinely amused me.

Deleted Scenes: How on Earth could they decide what to keep and what to cut?! My mind reels with the soul crushing decisions these people had to make! It’s all just so amazing! (words taste better when seasoned with sarcasm).

Photo Shoot: While having their pictures taken, the cast mates offer their praises for the show. Not thanks.