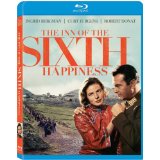 When a movie is described as a “timeless classic,” the implication is the film contains a level of artistic merit and cross-generational appeal that has made it relevant decades after its release, and will make it watchable decades from now. The flip side is the type of film that is very much of the time it was created. Despite what ought to be a universal message about caring for one another, The Inn of the Sixth Happiness — making a welcome debut on Blu-ray as part of the Fox Studio Classics series — belongs in the latter category.

“It sounds quite Oriental, doesn’t it?”

The Inn of the Sixth Happiness tells the story of Gladys Aylward, the real-life Christian missionary from Great Britain who was determined to travel to China in the early 1930s. The movie was released in 1958, one year after Alan Burgess’s book, “The Small Woman,” recounted Aylward’s story. So who better to play the modest, diminutive Brit than…statuesque Swedish film legend Ingrid Bergman?!?!

Bergman (Casablanca) stars as Aylward, who is initially denied permission to travel to China due to lack of qualifications. After a stint working as a second maid — I suppose she wasn’t even qualified to be a “first maid” — Aylward scrounges together enough money to make the perilous, cheaper journey on the Trans-Siberian railway and enter China. She settles in an impoverished village called Yang Cheng and meets up with Jeannie Lawson (Athene Seyler), an older, stubborn fellow missionary. Mrs. Lawson is in the process of fixing up an old inn — with help from endearing cook Yang (Peter Chong), who enjoys hearing Bible stories even if he doesn’t believe them — so she can attract locals and teach them about Christianity while they’re a captive audience.

During her time in Yang Cheng, Aylward crosses path with the local Mandarin (Robert Donat), who serves as the town’s judge, jury and executioner; she also meets Capt. Lin Nan (Curt Jurgens), the half-Chinese/half-European military man who wants to unify and modernize China. (Or, at the very least, do away with barbaric traditions like “foot binding.”) As the years pass, Aylward has to endure a great deal of personal loss and the impending Japanese invasion of the country. Through it all, her faith and perseverance remain unshakable.

Obviously, Bergman was far from an ideal physical match for the role of Aylward. However, I believe the legendary actress’s magnetic on-screen presence proved to be an invaluable asset. Whereas the real-life Aylward probably relied more on down-home grit to get her various jobs done, Bergman used her own tough-minded allure to interpret Aylward’s exploits. So whether Aylward was winning over the Mandarin, quieting a violent prison riot, or leading a group of children across dangerous terrain, Bergman’s performance gets the idea across: it’s impossible to keep this woman down.

Then again, the incongruity of Bergman playing Aylward would probably be the least of this film’s casting issues if it were released today. I don’t know that a German-Austrian actor like Jurgens would be anyone’s first choice to play Capt. Nan, but at least his character was supposed to be half-European. Donat, an Englishman, is in full yellowface as the Mandarin.

As ridiculous as these choices look today, viewing a film from 1958 through a 2014 filter isn’t totally fair. The Inn of the Sixth Happiness was an English production, with Wales filling in for 1930s China. So, for a variety of reasons, it’s not hard to imagine a world in which the list of Asian performers that a major studio would realistically consider placing in two lead roles was pathetically short. (Heck, it’s not like the box office in 2014 is bursting at the seams with viable Asian stars.) It’s not an excuse, but two other things work in this film’s favor. First, both Jurgens and Donat play their parts straight and respectfully. (For perspective, this movie came out three years before Mickey Rooney’s aggressively racist performance in Breakfast at Tiffany’s.) Secondly, Donat is actually pretty great in the movie. Aylward’s first run-in with Mandarin came when the latter had a crook beheaded; so watching the two grow to respect each other was as surprising as it was gratifying. The actor actually died before the film was released, which gives the last words his character says — “We shall not see each other again, I think. Farewell” — an extra dollop of poignancy.

Aylward was reportedly unhappy with many aspects of the film, including pointless name changes — the real-life business was called “The Inn of the Eighth Happiness” — and the embellishment of her romance with Capt. Nan. But I’ve seen too many movies that are “based on a true story” to get worked up over inaccuracies in the name of drama. Instead, the main issue I have with the film is that it ultimately feels empty.

Director Mark Robson, who earned the film’s lone Oscar nomination, captures the considerable scope of Aylward’s exploits, but little of the emotional impact. The script by Isobel Lennart gives us some strong scenes between Aylward and Mandarin, and staid scenes between Aylward and Capt. Nan, but it skips over a lot of crucial material. For example, we never really understand why Aylward had such a burning desire to work as a missionary in China. (As opposed to any other part of the world.) It also seemed like the tension of the Trans-Siberian train sequence was defused before it had a chance to get going. And I would’ve liked to see more of a connection between Aylward and the many children she adopted, which helped lead to her becoming such a beloved figure in China. (Sorry, but seeing her teach a group of kids the “This Old Man” nursery rhyme doesn’t cut it.)

The Inn of the Sixth Happiness clocks in at 158 minutes, and I can’t recall a movie with such a long running time that felt this rushed.

The Inn of the Sixth Happiness is presented in an aspect ratio of 1.85:1. The 1080p image is arrived at with an AVC MPEG-4 codec at an average of 31 mbps. Remember how I spent way too much time talking about how this film is very much a product of its time, and how that’s not such a great thing? Well, this new Blu-ray release also set out to capture the look and feel of the period; in this case, however, that’s very good news. The textured HD image features a pleasing amount of grain that serves the film’s rugged setting well. The colors, by DeLuxe, are earthier and less saturated than some of Fox’s Technicolor productions of the time period. Again, the choice serves this particular material well, although it does result in some skin tones looking darker and duller than what might’ve been intended. This restoration has also done away with any noticeable blemishes.

The DTS-HD Master Audio 4.0 track naturally gives the rears and subs the day off. That’s why I was stunned by how grand and full-bodied the aural presentation felt. Malcolm Arnold’s sweeping score — which strongly recalls his Oscar-winning work for The Bridge on the River Kwai — benefits most from the robust treatment. Dialogue comes through very clearly, and I liked that the English subtitles didn’t translate much of the Mandarin conversations because it put us in Aylward’s confused shoes. It might’ve been nice to have a more modern track that put the sounds of the bustling village all around us or delivered a booming thud during a critical air raid. But this faithful track still manages to acquit itself quite well.

Audio Commentary with Nick Redman, Aubrey Solomon and Donald Spoto: I usually prefer conversational tracks to ones where a bunch of independent speakers basically tag each other in, but I thoroughly enjoyed this commentary. Redman (a documentary filmmaker who is very familiar with Aylward), Solomon (a Fox studios expert), and Spoto (Bergman’s biographer) cover all aspects of the production. So after Solomon talks about how Lennart’s script condensed certain events in the name of dramatic flow, Redman is there to fill in the real-life blanks. I think this is an essential complement to the film.

Fox Movietone News: (2:09) A pair of newsreel presentations titled, “The Inn of the Sixth Happiness: Rapturous” (1:04) that includes footage of a Salvation Army event the film inspired, and a star-studded “World Premiere” (1:05) with appearances from Natalie Wood and Jayne Mansfield. Totally skippable. Features a Play All option.

Trailers: (6:16) Both the Theatrical and Spanish Theatrical (3:08 each) are included. They’re the exact same trailer, except the “Spanish” one merely has Spanish subtitles. The only reason they’re worth checking out is so you can appreciate the impressive work done on the feature film’s HD makeover.

I actually wasn’t familiar with Gladys Aylward before I watched this film, and by no means is The Inn of the Sixth Happiness meant to be the definitive telling of her life story. However, it’s an entertaining yarn that should’ve made more of an emotional impact considering the material and the message. (“We are all responsible for each other.”)

For better and for worse, they just don’t make them like this anymore. But thanks to this Blu-ray, The Inn of the Sixth Happiness has never looked better.