Posted in: Disc Reviews by Jeremy Butler on February 7th, 2014 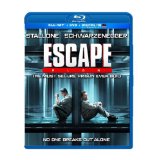 “A successful breakout depends on three things: Layout, Routine, and Outside Help.”

You know, there was a time when the public could only dream of an Arnold Schwarzenegger and Sylvester Stallone team-up. Now thanks to a little film called The Expendables, when it comes to the realm of action star team-ups, anything is possible. Case in point: Escape Plan. When this film was first announced, I figure it would be devoid of any real substance and just another attempt to capitalize on the success of  Expendables (the first one; the second is not that great), but the film surprisingly holds up on its own without having to cling to anything else.

Prisons are big business, and a big part of that business is maintaining the security and integrity of these institutions; if a prisoner manages to escape a facility intended to keep him in, well, chances they weren’t that secure to begin with. Ray Breslin (Stallone) is a structural security expert who has made a career of breaking out of some of the most secure (or so they are thought to be) prisons around. Gifted with a keen observant mentality and unwavering motivation, there doesn’t appear to be a facility on earth that given a little time, he cannot breach.

After finishing up his last job, Breslin returns to his firm and not even a day out of the joint is approached with a new job prospect, one unlike any he has ever undertaken before. Codename: The Tomb; this facility is one-of-a-kind and state-of-the-art, designed to house the worst of the worst; to put it simply, people who the world would just like to see disappear without a trace. The keepers of the facility want to make sure that it is inescapable, so they come to the one man they believe to be up to the task. Breslin is intrigued by the offer, and though it goes against all the security parameters that he himself is usually adamant about, accepts.

One black-bagged kidnapping later, he awakes inside the facility under the supervision of Warden Hobbs (Jim Caviezel, Person of Interest). That automatically puts him on edge, as he was informed before taking the assignment that he would be under the watch of a different warden. Imagine his surprise when he realizes that the pretenses for which he was lured into this place were false. Uncomfortable with this new direction, Breslin tries to pull the plug on the operation, but his rescue is not forthcoming, and it would appear that is stay in The Tomb is for a lot longer than he had intended. With no help from the outside coming, Breslin will have to rely on his many talents and the aid of a fellow inmate by the name of Emil Rottmayer (Schwarzenegger) if he is to escape the inescapable.

I always imagined that if I ever ended up in jail and needed to break out that the show Prison Break would be my guideline on how to accomplish it, but it looks I could learn a thing or two from Escape Plan as well. The plan to escape was well thought out and practical; easily believable and achievable, which works in the film’s favor. It explains every step of the plan with the right amount of detail for the audience to follow. Another bonus was the plot twists; some like the ending I saw coming, but there were a few that genuinely surprised me.

The goatee was a good look for Arnie, made him look younger and more of a badass; Stallone, on the other hand — the years showed on him, but he held his own. The chemistry between these two action film icons is the film’s major selling point. We glimpse their chemistry in Expendables even though there wasn’t a whole lot of interaction, but there’s plenty in Escape Plan. For those of you who wondered who would win in a fight, you may get your answer. Rounding out the cast were Jim Caviezel, Sam Neil, Vincent D’Onofrio, Curtis “50 Cent” Jackson, and Amy Ryan. Neil was a surprising and delightful sight, plus he rocked a little facial hair of his own. As the antagonist Caviezel is decent; he brings the same steely gaze and quiet albeit intimidating speech that he uses in his television series, although his character does have a few quirks that diminish his intimidating presence.

Escape Plan is presented in its original aspect ratio of 2.39:1. The 1080p image is arrived at with an AVC MPEG-4 codec at an average 35 mbps. The high-definition image presentation does not disappoint. It is hindered by the heavy use of color grading/correction. Most of the film is shot in The Tombs prison with a very cold blue-gray that intentionally washes out color. There’s really no color to speak of in these scenes. No orange jumpsuits. The prison inmates wear a gray coverall. There’s also a lack of texture and detail that is also owed very much to the color correction. Outside the prison there is a burst of natural color that looks better than it really is because of the contrast. You get that same confinement feeling, and the outside world just feels more alive because of it. That would tend to be an effective point; it just doesn’t make for an eye-popping visual. Black levels are only fair with little detail in the shadows. Again, it’s all part of a stylish choice.

The DTS-HD Master Audio 7.1 is often an explosion of sound without the actual explosions. They come a bit in the climax, but the surrounds are always busy. This is quite an immersive use of surround elements. You hear enough around you to be immersed in this claustrophobic environment. Nice echo reveals the metal and glass world quite effectively. The score has its moments, and dialog is always served well. That’s important when you consider that our main characters have to do a lot of whispering to make their Escape Plan.

Executing The Plan: (22:12) This is the typical making-of feature. You get the usual cast and crew sound bites, and there’s quite a huge mutual love-fest going on here.  There is some good behind-the-scenes footage, and I particularly enjoyed that they limited the clips to very few.

Maximum Security – The Real Life Tombs: (21:56) Here’s a look at the history of incarceration in America from prison barges to state-of-the-art modern prisons. We hear from cast and crew, but more importantly we hear from prison wardens and criminal justice professors. There’s real prison footage and artistic images of the pre-photo era.

Clash Of The Titans: (15:34) Of course, the big draw here is this is the first pairing of action titans Sly and Arnie. Yes, they had a brief meeting in The Expendables, but this is a real pairing that lasts much of the film. Both talk candidly about their decades-long rivalry and their long-time goal of working together.

Deleted Scenes: (8:13) There are 11 with a handy play-all. The only scene of any real note explains the “you fight like a vegetarian” line that is still in the movie.

An unexpected component for me was the humor. Naturally I expected a few one-liners worthy of a chuckle, but in actuality there were plenty of lines that resulted in me laughing out loud instead. In the end Escape Plan won’t be winning any awards, and I didn’t really find it to be that suspenseful, but it was still an action-packed thrill ride worthy of watching.

Jeremy Butler is a film school graduate of the International Academy of Design and Technology. He is been writing for Upcomingdiscs since 2012; however, movies have played a big part of his life for much longer. Favorite genres include horror, science fiction/fantasy, and comedy. Favorite movies are V for Vendetta, Boondocks Saints, Kiss Kiss Bang Bang, and The Godfather.
Scorned (Blu-ray) The Inn of the Sixth Happiness (Blu-ray)