Posted in: Disc Reviews by Archive Authors on March 10th, 2014 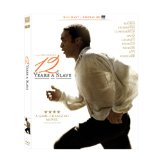 William Ford (Benedict Cumberbatch) is another “owner” of Northup but is also a Baptist preacher. His clear conflict with the hypocrisy of his situation is far more evident. He participates in a system he has a clear distaste for but still feels unable to change. Harriet Shaw (Alfre Woodard) is a mistress and de facto wife of another plantation owner which allows her to distance herself from the beatings and brutality in her own past. Brad Pitt, one of the producers of the film, plays an abolitionist carpenter from Canada working on the Louisiana plantation. Samuel Bass (Pitt) expresses the fear he feels. He speaks his mind and aids Northrup, but knows full well it is a dangerous game.

Chiwetel Ejiofor (Solomon Northup) has always displayed exceptional brilliance as an actor over the last decade, but the real breakout is newcomer Lupita Nyong’o (Patsey) as a radiant yet tortured slave.

12 Years a Slave is presented in its original aspect ratio of 2.40:1. The 1080p image is arrived at with an AVC MPEG-4 codec at an average of 29 mbps. This Fox Blu-ray does a tremendous job of conveying the extraordinary amount of detail director Steve McQueen and his team lavished on this film. It’s there in the close-ups of sweat, scars, and welts that are rendered with painful precision. It’s also there in some of the objectively beautiful panoramic shots of the 19th century South.

This is only McQueen’s third feature film after previously making his mark in the art world. As a result, much of 12 Years a Slave has a painterly composition that this disc helps bring to life. The image is often surprisingly bright and vibrant, with the color green, in particular, getting a chance to shine. Black levels during darker moments are oppressively deep. (Especially during the scene when Epps takes Solomon for a walk/interrogation in the middle of the night.) That does mean shadow separation gets a bit murky a few times. Still, I enjoyed the overall roughness and texture offered during these darkened interior scenes. McQueen made a beautiful looking film that contrasts with the unfathomably ugly humanity on display. This Blu-ray captures McQueen’s vision and helps sell that cruel irony.

The DTS-HD Master Audio 5.1 track is outstanding. Much of the film takes places outdoors, and the surround speakers provide a dynamic array of background noises that supplement the action without being distracting. In fact, the only instance where the background noise is noticeable is when we hear the swelling sound of cicadas while Solomon is hanging from a tree, and everyone else goes about their business. Some of the more effective sounds in this track are the surprising ones. For example, I expected the blows from Solomon’s first brutal beating to sound harsh. (These sound effects are confined to the front speakers, even though it must’ve been tempting to amp them up with some sub activity.) However, I was surprised to be even more horrified by the jarring sound of Solomon discovering his chains a few minutes earlier. In keeping with the film’s observational tone, Hans Zimmer’s score is tastefully deployed and never overwhelms the action on screen. Still, the track’s musical potential can be heard during an emotional rendition of “Roll Jordan Roll” by Solomon and some of his fellow slaves. Dialogue comes through clearly to the point that even some of the film’s thicker Southern accents can be deciphered. In short, this track subtly yet definitely immerses you in Solomon’s world.

A Historical Portrait: (41:21) This is a thoughtful and creative way to do a behind-the-scenes documentary. We get comments from cast and crew as Ejiofor reads excerpts from Northrup’s book. We also get a few historians who offer perspective and praise Northrup’s writing and photographic memory. Highly recommended. Presented in two parts with a Play All option.

The Team: (7:43) A look at the folks who helped recreate the film’s time period, including the production design, makeup, and costume design teams. McQueen also pops up to say he really wanted to create a safe, caring environment on the set, which seems particularly important for this film.

The Score: (3:55) Hans Zimmer’s terrific work — highlighted by the haunting “Solomon” theme — is more conspicuous in this mini-doc than it was during the film. Zimmer talks about admiring McQueen’s previous film (Shame) and wanting to work with the director. The composer also says he would’ve utilized strings in this score even if Solomon Northrup weren’t a violinist.

This Blu-ray was released two days after 12 Years a Slave picked up Best Picture at the Academy Awards. (John Ridley’s script and Nyong’o also earned trophies.)

Even if the movie had been completely shut out during the Oscars, it deserves to be seen for its unprecedented portrayal of slavery on the big screen. McQueen’s camera often hangs back and lingers on the way life simply was during this ugly period in history, rather than going in for dramatic close-ups or attention-getting cuts. None of us who are alive today experienced Solomon Northrup’s particular brand of hell. But by focusing on his story — a free man whose liberty was snatched away — the film slyly puts us in his horrified mindset. This may be an account of one man’s experience, but — as McQueen says in one of the featurettes — 12 Years a Slave is an American story.

Parts of this review — including the “Final Thoughts” — were written by John Ceballos.