Getting On: The Complete First Season (Blu-ray) 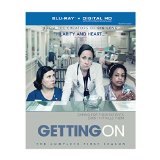 “It’s noble work. It is useful. You are angels of mercy…I just never thought that I would end up here.”

The geriatric care wing of a hospital — where the employees are undermanned and overworked, and many of the patients are in a near-catatonic state — is not the most obvious sitcom setting. As a result, HBO’s comedy series Getting On isn’t exactly what I’d call a gut buster. But even though much of the humor seems hyper-specific to this particular circle of workplace hell, anybody who has ever been underpaid to do a hard, crappy job should be able to relate.

I say the staff at the Billy Barnes Extended Care Unit within the Mount Palms Hospital in Long Beach, California is “undermanned” because the wing is short-staffed, but also because all of the patients and most of the employees are women. (One character openly longs for an infusion of testosterone.) And I say the job is “crappy” due to the long, thankless hours, but also because an inordinate amount of the pilot (“Born on the Fourth of July”) revolves around the fecal deposit that someone left in a chair.

The pile of poop actually plays a prominent role throughout the show’s six-episode first season. Dr. Jenna James (Laurie Metcalf) is working on a fecal study that she believes will earn her a certain level of medical superstardom and — more importantly — get her to a place where not all of the patients are “getting on” in years. We meet Dr. James during a particularly depressing holiday shift at the extended care unit. She has the admiration of Dawn Forchette (Alex Borstein), the lonely, eager-to-please head ward nurse. The newest nurse in the unit is DiDi Ortley (Niecy Nash); you can tell DiDi hasn’t been there very long because she hasn’t gone completely bonkers and is the most openly compassionate staff member. (Her soul is yet to be properly crushed.)

By the end of that first episode, Dr. James has alienated the supervising nurse (guest star Telma Hopkins) and gotten herself permanently assigned to the geriatric wing as is director of medicine. She also necessitated the arrival of a new supervising nurse. Enter Patsy de la Serda (Mel Rodriguez), whose sensitive nature and progressive ideas put him at odds with the no-nonsense Dr. James. He also enters into a complicated relationship with Dawn, despite the fact that he’s probably gay.

Getting On is based on the BBC series of the same name. The series has been adapted for American television by Big Love co-creators Mark V. Olsen and Will Scheffer, but much of the bone-dry British humour  remains intact. And although I never watched the original series, it seems a lot of the exact same storylines were also transplanted over for HBO’s adaptation. This isn’t a new practice: the pilot for the American version of The Office was basically a direct remake of its British counterpart. However, basing practically the entire first season on preexisting material — especially for a show with stories that feel as personal as the ones here — is something of a missed opportunity.

On the other hand, the decision is understandable because workplace drudgery and spirit-killing bureaucracy translate well across the pond. Getting On satirizes the butt-covering that goes on in almost every occupation. The show also captures the way relatively insignificant parts of a job can become the Most Important Thing in the World. In addition to the feces-in-a-chair incident — which naturally required the proper paper work be filled out — the various doctors are always fighting for beds within the unit. (Patient beds seem more valuable than gold on this show.) An off-hand, humorous remark leads to a perfectly painful (and plainly unnecessary) disciplinary hearing. I do wish the show had spent a little more time on the unique torture that is filling out self-evaluation forms.

Metcalf, a multiple Emmy winner for her work on Roseanne, is abrasive by design as Dr. James. The character cracks oblivious, insensitive jokes and is blissfully unaware of how condescending she is. Metcalf plays her with aggressive tics that suggest some sort of undiagnosed personality disorder. Dr. James comes off as the very worst parts of Office boss Michael Scott; Metcalf gives a committed performance, but she’s painful to watch. So is Borstein’s Dawn, but at least that character’s tragicomic tendencies come from a more relatable place. Borstein nicely underplays Dawn’s desperate-to-please demeanor, trusting the material to do most of the heavy lifting. Nash is an appealing audience surrogate as DiDi, who tentatively points out the ridiculousness of different situations. Rodriguez probably has the most intriguing character to play; Patsy is a highly-specific kind of cheery, damaged jerk. The actor, however, doesn’t pop on screen the way his co-stars do, so Patsy falls a little flatter than he should.

Recent Oscar nominee June Squibb plays a racist, homophobic variation of her outrageous, force-of-nature Nebraska character in Ep. 2/“If You’re Going to San Francisco.” Other guest stars include Harry Dean Stanton as a randy elderly patient, and Molly Shannon as a daughter trying to advocate for her dying mom. Daniel Stern also pops in as Dr. James’ husband in Ep. 5/“Nightshift”, my favorite episode of the season. One hundred percent of Getting On is set at the extended care unit, so I liked seeing the way the outside world intruded on the geriatric wing when Dr. James and Dawn joined DiDi at the hospital in the middle of the night for very different reasons.

Although the focus here is on the employees, much is made of the way their charges should be treated. Dr. James pragmatically argues for treating them like patients, while Patsy launches a cheesy “Make Someone Happy” campaign that argues they should be regarded as valued customers. The humor in Getting On doesn’t always land, and the show can occasionally be so bleak that you might not even consider laughing. But the central joke is a good one: these staffers are so self-centered and caught up in their “patient vs. customer” debate, they forget to simply treat them as “people.”

Getting On: The Complete First Season is presented in its original aspect ratio of 1.78:1. The 1080p image is arrived at with an AVC MPEG-4 codec at an average of 21 mbps. This HBO Blu-ray nicely captures the show’s gloomy, desaturated palette. It’s a solidly sharp presentation presentation with perpetually chilly tones. (You can see precisely how much makeup the lead actresses aren’t wearing.) The entire first season is presented in a single disc, but since the six episodes only clock in at 180 minutes there are really no compression issues to report. The staff at the Billy Barnes extended care unit doesn’t do a pretty job, so I wasn’t surprised to see Getting On (intentionally) doesn’t offer a very pretty HD picture.

The DTS-HD Master Audio 5.1 track offers completely clear dialogue, minimal background noise in the rears, and little more. I was actually struck by how much the show — and the track — embraces silence, allowing certain barbed lines of dialogue or poignant moments hang in the air.

Deleted Scenes: (6:05) In total, there are eight scenes from Eps.1, 2, 4 and 6. The highlights include DiDi sharing a tender moment with a patient in the pilot, and more deluded insanity from the Dawn/Patsy “relationship.”

Gag Reel: (6:20) The typical flubs highlighted by Nash’s cackling and Borstein’s propensity for yelling the F-word after screwing up. There are also a few funny, improv-y tangents, like Dawn grilling a security guard by asking him if he works for the CIA.

The second season of Getting On just premiered on HBO. Given that this batch of episodes took storylines from its British predecessor’s first two seasons, I’m curious to see if season 2 of the American version branches out into more original territory. (The British version only ran for three seasons.)

Getting On is probably best enjoyed as a dramatic series with funny moments rather than a traditional sitcom. It took me a bit of time to get used to the show’s rhythm; it probably won’t take quite as long for you to recognize a bit of your own job life here.