Posted in: Disc Reviews by Brent Lorentson on November 11th, 2014 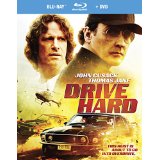 Personally I’m not a fan of the Fast and Furious franchise, despite the fact that I tend to enjoy films from the genre.  For me, I’ll take the old school films like Vanishing Point, Two-Lane Blacktop, and the original Gone in 60 Seconds over these big budget productions any day.  All I can figure is that these films that I do enjoy are working with budgets that force the directors to be creative and understand most of their elaborate stunts only get one take and are not polished with CGI, but instead whatever the camera captures that is what we see on the big screen. The stunts are simply incredible, and the cars in my humblest opinion were simply cooler back then.

Drive Hard is a fun throwback to chase films that lived in an era of drive-in theaters and grindhouse cinema.  Thomas Jane plays Peter Roberts, a former race car driver who gave up what could have been a successful career to be a father.  Sure, this is a respectable decision, but it’s a decision that has haunted him, as he now has taken on a career as a driving instructor.  Despite Roberts being a parent, he still hasn’t managed to give up the dream of being something more than an instructor, only it’s hard to imagine he could have expected Simon Keller (John Cusack) would be the person who would become the motivating force.  Simon isn’t just a regular student of Peter’s; in fact, Simon has specifically found Peter to once again take a spot behind the wheel, only this time around it is in the form of being a getaway driver.

Jane seems to be having a good time stepping in the role as the wheelman for Cusack.  This is a duo I never would have expected to see working together, especially since the duo is together in most of the film.  It’s this unexpected chemistry that helps drive this film and keeps us rooting for them.  Cusack is more than capable of playing a creepy villain; one only has to look at his performance in Grand Piano to see this.  But this time around Cusack is stepping into a less creepy role and instead is more a thief I found myself rooting for.

Is this a great movie? Not by a stretch, but I’d consider Drive Hard to be a fun movie that is restrained by a meager budget.  With director Brian Trenchard-Smith at the helm, this is the factor I believe gives this film the cinematic life it needed.  Sure, the actors bring some solid performances, but when you are watching a film called Drive Hard, you don’t care about the performances you care about the big action and more specifically the chase scenes.  Trenchard-Smith has a history of doing films with great stunts and small budgets; growing up his films Stunt Rock and BMX Bandits were some of my favorites I found myself re-watching.  It’s with his eye for action sequences on a budget that we get one pretty solid chase sequence in the first half of the film, and I wouldn’t be surprised if most of the production budget went into this sequence.

As the film plays on, it is the performances from Jane and Cusack that carry the film.  There is a moment later in the film that it is unfortunate there just wasn’t more they could have done with the sequence when they are being pursued by a gang of motorcycle riders.  This is a sequence that just felt neutered from the start but was most likely meant to be something much more intense.

Despite the film’s budget, the film is still a fun ride so long as you remember this is an action movie on a thin budget.

Drive Hard is presented in its original 1.85:1 aspect ratio.  The 1080p image is arrived at with an AVC MPEG-4 codec at an average of 30 mbps.  The first thing I noticed about this release was the saturation of the colors; despite having a beautiful sharp image the colors have been muted slightly.  The film has a very warm feel to it with plenty of yellows, reds, and oranges put into the filter.  Due to the fact the film takes place in the morning on into the late afternoon and mostly in well-lit locations, we don’t get to see how the black levels compare.  The look is intended to be a spiritual throwback to the car films from the grindhouse era, but this is noticeably a digitally-shot film, so we don’t get the grain or flicker that came from the older films.

The DTS-HD Master Audio 5.1 track may not produce the thundering bass we’d hope for from this type of film, but the track is still a solid one.  The one pro of the track is that the dialog comes through clearly throughout the presentation.  The audio mix is the most constant reminder that we are watching a film on a restricted budget as compared to other more recent car films like RUSH or Fast and the Furious.  Over all though it’s a passable track, but the film does deserve better.

There are no bonus features on this Blu-ray & DVD release.

I had fun with this film; despite its flaws it is still a fun little movie.  When you see a movie titled Drive Hard, you have to adjust your expectations, and if you go into this with an open mind and toss the nitpicking to the back seat, you just might enjoy the ride.

Brent Lorentson is a horror writer and film critic based out of Tampa, Florida. With a BA in Digital Film, he co-wrote and co-directed Scavenger Hunt. His short stories have appeared in various horror anthologies. In 2019 his short script Fertile Blood will be a part of the anthology horror film Slumber Party. He is currently working on his first novel A Dark and Secret Place set to be released in late 2019. Favorite Films: Taxi Driver, Fight Club, I Saw the Devil, The Wild Bunch, Dawn of the Dead, A Clockwork Orange, Pulp Fiction, Heathers, The Monster Squad, and High Fidelity.
Getting On: The Complete First Season (Blu-ray) Jersey Boys (Blu-ray)