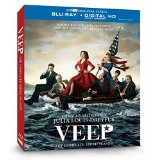 “For the first time in four years, I can say what I really think.”

It may have taken four years for fictional U.S. Vice President Selina Meyer to make her boldest political move yet, but Veep was finally able to achieve all-around greatness in just three. I know there are fans of HBO’s caustic comedy series who would argue the show was already great, and I agree there have absolutely been many flashes of foul-mouthed brilliance throughout its run. But it wasn’t until Veep had Selina Meyer try to outgrow the show’s title in season 3 that the series itself ascended to another level.

“I like standing up here, looking down at everybody.”

Season 3 starts with VP Meyer (Julia Louis-Dreyfus) on the road to promote her book, which has the perfectly-awkward title “Some New Beginnings: Our Next American Journey.” More importantly, Meyer is grudgingly pressing flesh because she and her team learned at the end of season 2 that POTUS — still never seen on this show — will not be seeking re-election. As a result, the book tour doubles as a stealth presidential campaign. But since very little goes according to plan in Veep-land, the cat is let out of the bag much sooner than expected.

Selina’s team is predictably frazzled. Workaholic chief of staff Amy Brookheimer (Anna Chlumsky) and smug deputy communications director Dan Egan (Reid Scott) engage in a cutthroat competition to become the veep’s campaign manager. Communications director Mike McLintock (Matt Walsh) has bounced back from his financial struggles and general misery, but wedded bliss (guest star Kathy Najimy plays his wife Wendy) and a desire to potentially grow his family leave him just as distracted from his job as he was before. Even Selina’s personal aide Gary Walsh (Tony Hale) starts to buckle under the pressure…and under the weight of the gigantic bag he carries to tend to Selina’s every need. And as if running for president weren’t challenging enough, White House liaison Jonah Ryan (Timothy Simons) goes from being a professional pest to an outright antagonist.

Creator Armando Iannucci and his team pushed all the right (hot) buttons during season 3. Episode 2/“The Choice” is a glorious half-hour of fence-straddling and pinpoint hemming and hawing as Selina tries to figure out, in exacting detail, what her stance on abortion should be. The sharp jabs at Silicon Valley culture in Ep. 4/“Clovis” felt especially timely given Veep‘s comedy companion on Sunday nights. The early part of the season also takes some easy-yet-deserved shots at irresponsible New Media as Jonah launches his own gossip website, “Ryantology.” And Ep. 8/“Debate” is a perfect satire of how every minor snafu — style choice, weird facial expression, malapropism — can make any/every candidate look like a buffoon.

The show’s groove extended to behind the scenes. Kevin Dunn and Gary Cole, who joined Veep in season 2 as recurring players, have more prominent roles as Selina’s campaign heats up. Dunn (a series regular for season 3) is especially great as the foul-mouthed, believably beleaguered White House Chief of Staff Ben Cafferty. who resolves to help Selina become president. Meanwhile, Cole’s commitment to humorlessness as number-crunching strategist Kent Davison is sneakily hilarious. He also does the seemingly impossible: Kent’s crush on Selina’s similarly-rigid, schedule-making assistant Sue Wilson (Sufe Bradshaw) finally gives Sue an interesting storyline. (Well, almost) There weren’t a lot of new additions in season 3, which meant the show was able to bring back funny, capable actors like Randall Park and Isiah Whitlock Jr. as political foils for Selina. But the new faces that do crop op are pretty great. Sam Richardson (as hilariously incompetent aide Richard) has been made a regular for the upcoming fourth season. The biggest name is Christopher Meloni (Law & Order: SVU) as an oblivious personal trainer who disrupts Selina’s entourage.

Selina and her entourage, coincidentally, is where I felt the show improved the most. Even with the increased level of storytelling urgency and the most impressive stream of profane insults on television, the astoundingly-simple reason I like season 3 of Veep more is because I like the characters more. Back in season 1, many of them felt like quick-witted, ultimately interchangeable hate monsters to me. The beauty of the show’s evolution is that Iannucci hasn’t softened or consciously made any of the characters more likable. Instead, the improvement is a combination of time invested with these people and wonderful performances by a troupe of highly-skilled actors.

It’s only by spending two seasons watching Gary compulsively worship the ground Selina walks on that you can appreciate the comedy of him pathologically filling his bag man role for Wendy at her wedding. And it’s only by knowing how ruthless and smarmy Dan is that you appreciate how weird it is to see him be, um, nice. (Whether he’s pretending, or really trying to turn over a new leaf; Dan attempts both in season 3.) The cast is led by Louis-Dreyfus, who is now 3 for 3 at the Emmys for playing Selina. Ep. 9/“Crate” might feature her finest moment yet on the show, as Selina’s rollercoaster campaign takes a shocking turn.

If there’s one minor complaint is that the show’s breakneck pace might leave you a bit baffled at times. (There were at least two times when Dan got fired, only to be brought back immediately.) I only hesitate to say that the season ends on a high note because Selina Meyer’s merry band of sad sacks can’t ever get too high. During the season, Diedrich Bader turns up as potential campaign manager who advises Selina to fire her entire staff. One of my early complaints with this show is that, beyond their comedic shortcomings, most of these people didn’t seem to be very good at their jobs. Selina goes on to label each of them “Losers!” later in the season, and I probably wouldn’t hire them to run a campaign for student body president. But the great thing about season 3 is that by now, they’re our losers. To paraphrase the veep, they’re *our* a–holes.

Veep: The Complete Third Season is presented in its original aspect ratio of 1.78:1. The 1080p image is arrived at with an AVC MPEG-4 codec at an average of 32 mbps. Veep has a loose, cinema verite filming style that’s actually a really good match for a show that heavily incorporates improv. As a result, this is probably the least glamorous-looking show you’ll find on HBO. (Depending on whether or not Curb Your Enthusiasm ever comes back.) That certainly hasn’t made for the most dazzling HD presentation, but the Blu-ray shouldn’t be penalized too harshly for replicating the show’s generally muted-palette. The characteristically-clean image gets an immediate boost of color and light because part of the season premiere/“Some New Beginnings” is set at Mike’s outdoor wedding. Meanwhile, the inky black levels get a rare mini showcase in Ep. 2 when Selina accompanies the Maryland Coast Guard on a nighttime drug bust. Pulling off an image that’s both sharp and drab is a tricky feat, but this Blu-ray — like the two before it — serves the material very well.

The DTS-HD Master Audio 5.1 track is here to serve the salty, oft-overlapping dialogue. On this front, the track remains exceptional. There is terrific clarity and separation, the latter of which is crucial when there are two or more people yammering. The track does a strong job of making sure each nasty quip is audible. It’s a good thing too, because there’s not much to the track beyond the dialogue. Sub activity is non-existent and the use of the rear speakers continues to be a missed opportunity. A good part of the show takes place at either public functions or frantic work spaces, yet the rears are content to crank out the equivalent of white noise. Then again, this isn’t supposed to be a sonic extravaganza. As with the show itself, dialogue is king here.

Audio Commentaries with Cast and Crew: There are four commentaries, for Eps. 7, 8, 9, and 10. Most of them are pretty crowded (at least 3-4 people) and they include the participation of the entire main cast along with episode writers and directors. I found it amusing that Ep. 7/“Special Relationship” was filmed on location in the U.K., even though the show rarely ventures outdoors and probably could’ve shot it most anywhere in the U.S. In between all the good-natured jokes, we learn things like the fact that Selina’s radical hairstyle change was Louis-Dreyfus’s idea and that the person who made her wig did the same for Sandra Bullock in Gravity.

Deleted Scenes: (18:17) There are deleted scenes attached to every episode, except 10/“New Hampshire.” (Then again, episodes 9-10 originally aired on the same night on HBO.) As with previous releases, there is some phenomenally funny material in these deleted scenes, which really play like alternate takes that simply can’t fit within the show’s 30-minute run time. (I wouldn’t mind a montage of Mike asking Siri questions.) Features a Play All option on each disc.

Governor’s Visit: (2:56) Maryland Gov. (at the time) Martin O’Malley drops by the show’s Baltimore set/hangar for a visit with the cast and crew, and to praise the show’s realism. (Yikes!) Available on Disc 2.

Veep: The Complete Third Season features all 10 episodes on two discs. It also represents a definite high-water mark for the show, as far as I’m concerned.

Season 4 is set to kick off April 12, and I have a feeling the show (if not Selina) will be able to maintain its forward momentum.