Posted in: Disc Reviews by Gino Sassani on April 3rd, 2015 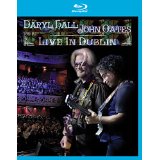 They started as a local band in Philadelphia. By 1972 they had released their first album on the national stage called Whole Oates. The duo has been together for over 40 years and have remained playing through most of that time. Even with stops for solo projects, Daryl Hall and John Oates have remained a team throughout those years. It’s rather rare for a rock team to remain together and friends for so long. Their endurance has paid off in so many ways, but 2014 would be a year they would see a lot of that hard work and partnership be recognized as they became the first Philly band inducted into the Rock And Roll Hall Of Fame. They are also the best selling duo in recording history. Sounds like the books can be closed on Hall & Oates, right? Wrong. It’s also true that in all of their world tours the group never played Ireland. That mistake was corrected when Hall & Oates appeared at the historic and intimate Olympia Theatre in Dublin on July 15, 2014. High-definition cameras were on hand to record the event. And now Eagle Rock Entertainment is releasing the historic event on Blu-ray. It’s Hall & Oates Live In Dublin.

While the core duo for whom the act is named has remained intact all of those years, many musicians have come and gone. Fortunately, for this release the band featured here is one of the best the duo has ever assembled. This is absolutely one of the tightest groups of performers I’ve seen or heard in quite a while. The longest-standing member of the band is sax player Charlie DeChant. He’s been with the guys since the fun started in the 1970’s. His riffs provide much of that Philly sound that makes the Hall & Oates experience one of the more unique ones around. There’s a fusion of rock, funk, and old time rhythm & blues to the sound, and it’s distinctive. Count Charlie has one of the huge contributors to that element. The band here also features three members of the 1970’s Average White Band. We’re talking about Eliot Lewis on keyboards, Brian Dunne on drums, and bass player Kyle Jones. Both bands had a very similar vibe, and the combination is one of those natural things that just work out perfectly. Throw into the mix guitarist Shane Theriot and percussionist Porter Carroll, and you have a recipe for good music.

There’s some mixed news for the fans here. Yes, the band is outstanding. There are fans who don’t like the fact that Hall & Oates aren’t your typical live performers. They don’t deliver perfect imitations of the songs you might have fallen in love with from the radio or the records. Hall brags that he never likes to play a song the same way twice, and that’s evident here. It’s a bit of a double-edged sword. On one hand, it’s nice to be able to listen to a classic song with fresh ears. On the other hand, however, there are always those nuances of a particular song that has become imbedded in the brain of many fans, and they wait for that one moment or riff. I can’t count how many concerts I’ve attended where a lead guitar player gets a standing ovation for the flawless reproduction of a popular lead break. All of that is subject to change with these guys, from the actual instrument arrangement to the vocal performance, from the lead breaks to the phrasing of both notes and lyrics. It’s all subject to variation. I haven’t heard too many of Hall & Oates numbers live before, so it was a bit of a culture shock. I suspect fans are used to it and perhaps have long since embraced the tendency.

The concert is all about the music and the rather intimate relationship with the audience. The guys don’t talk a lot. There aren’t any pyrotechnics or choreographed dance moves. This band lets the music do all of the talking. It’s the focus of everything that happens here. No fancy camera moves or effects. This is straightforward rock ‘n’ roll, and I have to say the old-school charm is refreshing for me. Most of the talking they do is to keep apologizing about having never played in Ireland before. They marvel a lot as to what took them so long. Yeah, it does get a little old, and both have played Ireland as solo artists. In fact Hall has been to this very theatre before, so it gets to be a little over the top. But if that’s the only distraction to the music to be found, I’d say it’s a pretty good day.

The selections of songs take you across the band’s 40-year history, and it’s obvious that the band knows how to pick fan favorites.

Maneater, Out Of Touch, Say It Ain’t So, Family Man, It’s So Uncanny, Las Vegas Turnaround, She’s Gone, Sara Smile, Do What You Want Be What You Are, I Can’t Go For That (No Can Do), Rich Girl, You Make My Dreams, Kiss On My List and Private Eyes.

I suspect that there might have been more at the original concert as this runs just short of 90 minutes. I’m told these guys rarely go under two hours.

The concert is presented in its original aspect ratio of 1.78:1. The 1080p image is arrived at with an AVC MPEG-4 codec at an average 35 mbps. Concert footage is never going to be like something filmed in a more controlled environment. Lighting is often harsh and inconsistent. With that said, anyone who has attended this kind of concert will recognize the accuracy of the experience. The high-definition image presentation does a pretty solid job of capturing the atmosphere of the event. Crowd shots might not have a tremendous level of sharpness and detail, but it’s enough to appreciate the beautiful designs of the venue itself. The shots of the band are most impressive close-up. Long shots don’t have the same kind of sharp image you get when the camera moves right into a face or instrument. Black levels are fair, and this is about as close to being there as you’re ever going to get.

The DTS-HD Master Audio 5.1 is, of course preferable to the LPCM stereo mix. Vocals stand out front and center just as they should. The acoustics here are superior to the large stadium setting, and that allows you to take in that intimacy quite effectively. Yes, there are a few moments an instrument is lost in the mix. I’ve been at first-class concerts that were far worse. The surrounds do a good job of filling the mix, and the sub pulls in the bass riffs just fine. John Oates is a bit soft-spoken, but even when he speaks we can hear him clearly enough without losing that softness in his voice.

Interviews With Hall & Oates: There are two 7-minute section. The first talks about their first gig in Dublin while the other highlights the members of the band.

The 70’s was my time. I grew up on the sounds of a decade that too often is mistaken as one dominated by disco. The truth is that a lot of classic rock came from those years, and Hall & Oates definitely fits in that category. I’ve seen a lot of those bands still plugging away both live and on home video. I have to say these guys wear their age better than most. Of course, it’s a little easier when you’re not expected to run around and scream all night long. This stuff represents the best of the concert rock years. Although I never caught them live myself, the show brought me back to the shows I did enjoy during that era. There’s a kind of peace that falls within the pure energy of the music, and this is one I’ll be watching again down the road. Because a Hall & Oates concert “is on my list of the best things in life”.

Gino Sassani is a member of the Southeastern Film Critic's Association (SEFCA). He is a film and television critic based in Tampa, Florida. He's also the Senior Editor here at Upcomingdiscs. Gino started reviewing films in the early 1990's as a segment of his local television show Focus. He's an award-winning recording artist for Omega Records. Gino is currently working on his 8th album Merchants & Mercenaries. Gino took over Upcomingdiscs Dec 1, 2008. He works out of a home theater he calls The Reel World. Favorite films: The Godfather, The Godfather Part II, The Body Snatcher (Val Lewton film with Karloff and Lugosi, not the pod people film), Unforgiven, Gladiator, The Lion King, Jaws, Son Of Frankenstein, The Good, The Bad And The Ugly, and Monsters, Inc.
Veep: The Complete Third Season (Blu-ray) The Rewrite (Blu-ray)