Posted in: Disc Reviews by Gino Sassani on March 2nd, 2017 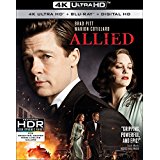 The first 20 minutes of the film are actually quite good. It starts out almost as a modern-day Casablanca with nice plot beats and enough intrigue and character development to keep your interest. It’s only when they are not pretending anymore that the chemistry appears to fall out of the relationship like a lead zeppelin. The two actors are far more convincing when their characters are faking it all. The film descends into a rather mundane suspense thriller, but without too many thrills. If you honestly want to remain in the dark about the truth, I won’t tell you here. Unfortunately, the filmmakers don’t do much of a job hiding things in the trailer. Best to avoid that if you hope to keep up the suspense. Alas, that still won’t be enough, because the film emotionally telegraphs its twists. The best plot stuff gets treated too casually without any attention to details. I expected more from famed director Robert Zemeckis, who appears to have forgotten how to linger and tease his audience. It would seem that Zemeckis took his box of chocolates and drove away in his vintage Delorian for the Twin Towers only to discover a soccer ball with a bloody handprint. The man used to know a lot about storytelling.

Allied is presented in its original aspect ratio of 2.35:1. The Ultra-high-definition  image is arrived at by an HEVC codec with an average bitrate that fluctuates quite a bit from the 30’s to as high as 80mbps. The ultra-high-definition image presentation looks quite stunning at times. The rich sepia tones of the period piece make for a rather beautiful picture, particularly in the first act of the film. The computer images are a little obvious at times, which is the only real flaw to be found here. Black levels are actually very impressive with a wonderful abundance of shadow detail. The image is sharp with just a touch of rather nice depth that immerses you into this World War II period.

I was quite disappointed to find only a DTS HD-MA 5.1 audio presentation here. There are too many missed opportunities to bring the viewer more fully into this world. As it is there are some nice surround moments during the firefight and also during the blitz moments in London. There just could have been so much more here, and the experience isn’t as immersive as it could/should have been. Subs aren’t as dynamic as one would expect. I found this most glaring as the German bomber is brought out of the sky and crashing to the ground. Dialog is always clear. The score is emotional and cuts through not because of sheer volume, but rather because it is so well placed in the sound field.

Feature: (1:07:54) This is a 10-part feature that includes a handy play-all option. The segments cover all of the important points of the production. They include the script/story, casting, production design, f/x and the characters. It’s quite a bit of a love-fest at times, but there’s a ton of behind-the-scenes footage here. Cast and crew offer the usual tidbits.

Gino Sassani is a member of the Southeastern Film Critic's Association (SEFCA). He is a film and television critic based in Tampa, Florida. He's also the Senior Editor here at Upcomingdiscs. Gino started reviewing films in the early 1990's as a segment of his local television show Focus. He's an award-winning recording artist for Omega Records. Gino is currently working on his 8th album Merchants & Mercenaries. Gino took over Upcomingdiscs Dec 1, 2008. He works out of a home theater he calls The Reel World. Favorite films: The Godfather, The Godfather Part II, The Body Snatcher (Val Lewton film with Karloff and Lugosi, not the pod people film), Unforgiven, Gladiator, The Lion King, Jaws, Son Of Frankenstein, The Good, The Bad And The Ugly, and Monsters, Inc.
The King of New Orleans Logan