Posted in: Disc Reviews by Archive Authors on May 16th, 2017 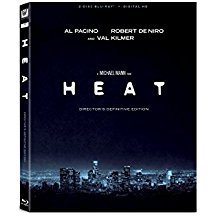 There was a 20th anniversary edition of Michael Mann’s Heat planned a couple of years ago by the folks at Warner Brothers. There was hope of a 4K restoration and more. The rights ended up reverting to 20th Century Fox before any of that could happen. Now Fox has released something they are calling The Director’s Definitive Edition, but it is the same cut and print of the film as used in the last Warner Brothers’ Blu-ray release. So I really can’t tell you what is definitive except for a couple of new and more recent bonus features.

Pacino plays a cop who is tracking a group of robbers, among them Val Kilmer (Wonderland) and Tom Sizemore (Saving Private Ryan), a group headed by DeNiro. The group receives offers for work from Jon Voight (Runaway Train), and they rob anything from gold to coins to bearer bonds. They are all ex-cons, and know all the ropes. They are a highly professional crew, which you see in the opening moments of the movie, despite the addition of a new man to the crew. What also helps to differentiate this from a usual cops-and-robbers movie are the secondary plotlines of the families involved. Pacino’s is clearly distant and breaking (played by Diane Venora and Natalie Portman), while DeNiro doesn’t have one to speak of, despite an emerging romance with Edy (Amy Brenneman, Judging Amy). At three hours, there are some unnecessary scenes involving a banker (played by William Fichtner), but the underlying message is that almost all of the actions in the movie do not involve just the primary characters, but also friends and loved ones of those characters. Kilmer’s wife in the film, played by Ashley Judd, desperately wants to get him out of his line of work, as she wants to start a new life for her family. An ex-con (Dennis Haysbert, 24) is stumbled upon working in a greasy spoon, and offered a chance to work by DeNiro. Haysbert’s character wants to be right, but runs into so many obstacles from it that he takes the job, only to wind up perishing in what results in a massive gunfight in the heart of Los Angeles while a bank robbery is being pulled.

With other solid supporting performances by Ted Levine (Monk), Mykelti Williamson (Forrest Gump), and appearances by Bud Cort (Harold and Maude), Jeremy Piven (PCU), Hank Azaria (The Simpsons) and Henry Rollins (The Chase), the movie is certainly not without its star power. The director behind this work is Michael Mann, who also wrote a much-better-than-expected story. The man responsible for such striking visuals in films such as Manhunter, Ali, and The Insider contributes more outstanding work here.

Heat is presented in its original aspect ratio of 2.35:1. The 1080p image is arrived at with an AVC MPEG-4 codec at an average bit rate of about 23 mbps. It’s a very dark film, and fortunately the black levels are at least fair. Nothing really pops on this high-definition release. Detail is great, but I don’t see superior sharpness or color anywhere on this film. It’s a very average image presentation for a high-definition release.

The DTS HD-MA 5.1 track is as average as the image. Most of the sound is really pretty much front and center. Mann uses contemplative scenes where people talk softly while synth rock and roll plays. It’s a boring music video effect that isn’t enhanced here at all. You do hear all of the dialog, and that is really the most important part of the film. There are occasional moments of aggressive surrounds, most notably in the street firefight that starts the last hour of the 3-hour film.

There is a commentary by Mann that goes into a great amount of detail on the characters, along with some minor production detail. All in all it’s not a bad commentary.

The extras were ported over from the DVD and Blu-ray release. The new features are a couple of new film festival panels.

2015 TIFF: (30:27) Michael Mann is interviewed before and after a showing of the film at the festival.

2016 Academy Of Motion Pictures Arts And Science: (1:03:23) This is a pretty solid panel. Christopher Nolan acts as host and interviewer as Michael Mann, Al Pacino, and Robert DeNiro reunite for the panel. Halfway through the feature the cast and crew participants expand to 13 and it becomes more of a discussion format. Val Kilmer has a condition that made his tongue swollen and is hard to understand. At first I thought it was a joke and he was doing a Marlon Brando bit. Give the guy credit for showing up and participating.

The film’s buildup never quite lived up to the hype. In retrospect it’s a better film than I remembered it to be. Likely the film ages better without the hope of more DeNiro and Pacino interaction. Some believed they were never together either in the cafe scene or the final showdown. It’s clear that they were, but Mann appears to have gone out of his way to make that look like the truth with the characters facing opposite directions in the climax and the use of single-character shots in the cafe. We’re still waiting for a good DeNiro/Pacino get-together after Righteous Kill was even more of a disappointment. Alas, we’ll always have The Godfather Part II even if they do not share screen or even era time together.

This review was written by Gino Sassani and Ryan Keefer