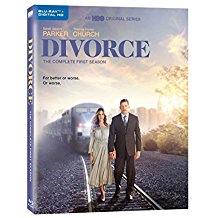 “Look, as lousy as the marriage is, the divorce is going to be much, much worse.”

The subject of divorce isn’t exactly a laugh riot in real life, so the makers of HBO’s comedy series tracking the dissolution of a decade-long marriage had their work cut out for them. Divorce (not surprisingly) takes a darkly comic approach to the hostile material; the problem is the show seemingly forgot about the part where we’re supposed to want to spend time with these people every week. The series also marks the HBO return of star/executive producer Sarah Jessica Parker…call this new show No Sex in the Suburbs.

“I want to save my life while I still care about it.”

Divorce centers around Frances and Robert Dufresne (Sarah Jessica Parker and Thomas Haden Church), who have been married for 10 years. Apparently, that is long enough for each of them to not even pretend like they can still stand each other. Given their mutual distaste — along with a comically life-threatening situation involving fellow miserable married couple Diane and Nick (Molly Shannon and Tracy Letts) — Frances informs Robert that she wants a divorce. The news absolutely rocks Robert’s life…as does the the fact that Frances had been carrying on a sexual relationship with a French professor named Julian (Jemaine Clement). This 10-episode first season chronicles the ups and downs and every painful step of Frances and Robert’s separation. (The couple goes from agreeing to an amicable mediation to hiring the sharky-est divorce lawyers they can find.) Unfortunately, it all ends up being about as much fun as it sounds.

The series is created by Sharon Horgan, who also co-created the excellent Amazon dramedy Catastrophe with Rob Delaney. Whereas Catastrophe insightfully tracks the creation of an unconventional family unit following a one-night stand, Divorce seeks to inverse that formula by showing us the slow destruction of a relationship between two people who have been together far too long.

“Are you really sure you would never try to blow my head off?”

Divorce brushes up against some interesting ideas (how being married to someone doesn’t protect a person from feeling intense loneliness) and occasionally illustrates relatable emotions (Frances talks about feeling unhappiness upon arriving at her house and realizing that Robert’s car is there). However, the show simply relies on too many “ball and chain” cliches about why marriage sucks. (Bathroom time is alarmingly scarce for Robert in his own home, for example.)

It’s tempting to view Divorce as a sorta-sequel to Parker’s Sex and the City exploits. (This is what happens to Carrie Bradshaw 10 years after deciding to settle down and leave the city.) Just like in her previous iconic role, Parker plays a plucky, imperfect, frustrating protagonist. The difference here is that Frances isn’t buoyed by the camaraderie and support provided by the sort of close friendships that Carrie enjoyed. (Shannon and Talia Balsam play France’s equally bitter female friends here, although Balsam’s saucy crankiness is the only one of the two that gets consistent chuckles.)

Church easily gets most of the laughs doing the pompous dolt routine he has perfected over the last couple of decades, most notable in Sideways. Even though Robert is the one who was cheated on, the character’s cluelessness and petulance don’t exactly make him a sympathetic figure. The actor leans into those unflattering qualities, which results in some amusing moments. (Robert actually gets to be selfless in Ep. 6/“Christmas.”) Divorce also sprinkles in vibrant recurring performances by Dean Winters (as Robert’s abhorrent, misogynistic divorce attorney) and Jeffrey DeMunn (as Frances’ possibly daffy lawyer), but they’re not really on-screen enough to move the needle.

The finale concludes with one of the soon-to-be-exes firing off the most hostile shot across the bow we saw all season. I reckon it’ll lead to some fireworks (and hopefully some surgically nasty comedy) once the show returns

Divorce: The Complete First Season is presented in an aspect ratio of 1.78:1. The 1080p image is arrived at with an AVC MPEG-4 codec at an average of 26 mbps. The show’s upstate New York setting largely results in a slightly chilly/grayish palette that actually matches the mood of Frances and Robert’s decaying marriage quite well. Fine detail is very strong here: the series opens with a shot of Frances closely examining every line of her face in a mirror. Divorce leaves behind the glitz and glamor of the big city from Parker’s previous HBO gig in favor of a more naturalistic presentation that also happens to be clean and blemish-free.

The DTS-HD Master Audio 5.1 track is (like most comedies) focused on dialogue, which comes through cleanly throughout. However, I felt there were some missed opportunities for some dynamic surround activities. For example, some of the parties at Diane and Nick’s house suggested bustling activity on-screen, but that didn’t quite come through from the rear channels. (Same deal anytime Robert visited his construction site.) Sub activity is virtually non-existent; every once in a while, Keegan DeWitt’s score will nudge the bottom end of your sound system awake. Otherwise, this is a pretty straightforward, dialogue-driven track that does its primary job well enough.

Audio Commentaries: There are commentary tracks for Eps. 3, 6, and 7. (Personally, I thought that was a curiously random selection: at the very least, TV shows usually offer commentary for the first and/or last episodes of their seasons.) Anyway, the tracks feature input from star/executive producer Parker, along with exec producer/writer Paul Simms, and writers Tom Scharpling and Adam Resnick.

There’s nothing exactly earth-shattering here, though the conversation is pleasant enough. There are amusing factoids, like people repeatedly asking the colorblind Simms for this thoughts on the show’s colorful opening title graphic. The most interesting bit involved Parker discussing co-star Thomas Haden Church’s knack for (judicious) improvisation, which contrasts with her preference for learning all the lines in a script as they are written.

Divorce: The Complete First Season features all 10 episodes on two discs. The show has been renewed for a second season and filming is underway, but HBO hasn’t announced a premiere date for the new episodes.

Simply put, the show pales in comparison to the premium channel’s other half-hour offerings. It’s not nearly as laugh out loud funny as Veep or Silicon Valley, and it’s not as observant or artistically daring as the just-concluded Girls or the gone-too-soon Togetherness. That being said, I’m not entirely ready to break up with Divorce, especially since HBO has also recently aired half-hour series with shaky starts that significantly improved with time (Getting On, Looking). Here’s hoping Divorce follows suit.