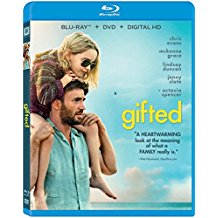 On the surface, being blessed with a genius-level intellect seems like good thing, right? So it’s interesting that movies about uncommonly smart people (Good Will Hunting, A Beautiful Mind, and The Imitation Game to name a few) tend to focus on the extreme isolation and inevitable exploitation of these individuals. Gifted is about a potential “one-in-a-billion” math prodigy and her weary, protective uncle, who carries himself like someone who’s seen too many movies about exploited geniuses and knows full well that “nobody likes a smart-ass.”

Mary Adler (Mckenna Grace) is a strong-willed and smart-mouthed girl who lives with her scraggly, boat repairman uncle Frank (Chris Evans) and is about to begin first grade. During her first day of school, Mary’s kind, overmatched teacher Bonnie (Jenny Slate) quickly realizes that the little girl’s mouth isn’t the only smart thing about her. Mary is quickly identified as gifted, which doesn’t come as a shock to Frank; his sister Diane (and Mary’s mother) was an extremely promising mathematician who committed suicide shortly after Mary was born. Frank, a former philosophy professor himself, recognizes a lot of the same qualities in Mary, which is why he turns down a scholarship to a private school for gifted children.

Word of Mary’s math talents eventually reaches her grandmother/Frank’s mother Evelyn (Lindsay Duncan), who proposes moving Mary to Massachusetts and placing her on a path similar to the one Diane was following prior to her death. Frank, on the other hand, is steadfast in his desire that Mary live like a “normal kid” and lead the sort of ordinary life that her mother never got a chance to experience. The result is a bitter custody battle between Frank and Evelyn.

Despite the other genius-centric movies I mentioned up top, Gifted actually has more in common with Little Man Tate, Jodie Foster’s underrated drama about a child prodigy. The director here is Marc Webb, who was vaulted from making a modest, well-regarded rom-com (500 Days of Summer) to Blockbuster Boulevard (The Amazing Spider-Man two-logy). Webb clearly seems to be enjoying the chance to work on a smaller-scale again, but I wonder if he over-corrected toward simplicity. The movie (made for a mere $7 million) bypasses several opportunities to present Mary’s intellect in more stirring or dynamic ways.

Of course, the whole point of Gifted (and Frank’s argument) is that sometimes the best thing you can do is keep it simple, stupid. Fortunately, the film’s straightforward and predictable narrative is completely buoyed by charming and live-in performances across the board.

The trickiest role to pin down, naturally, is Mary. But Grace — who nails the emotional beats with the same aplomb she displays during Mary’s funnier moments — is simply terrific. She also has excellent chemistry with Evans, who seems to relish the idea of playing an ordinary person after his multiple outings as Captain America. The actor gives a loose and thoroughly appealing performance in showing us the gruff love Frank has for Mary while also letting us see glimpses of the bitterness over everything he’s had to sacrifice. (“He’s the quiet, damaged hot guy.”)

To her credit, Duncan prevents Evelyn from coming off as a complete ice queen, and some of the movie’s most effective moments feature Evelyn and Frank (intense adversaries in court) expressing glimmers of regret before their armor comes back up. Former SNL star Slate also shares solid chemistry with Evans (the pair dated for a while in real life) and delivers sweet, no-frills work as a supportive presence for both Mary and Frank. Meanwhile, Oscar-winner Octavia Spencer provides some comic relief as Roberta, the manager of Frank and Mary’s housing complex and another fierce protector of the little girl’s well-being.

I appreciated the fact that Tom Flynn’s script gives solid credence to Evelyn’s perspective that Mary’s game-changing (and potentially world-changing) talents shouldn’t be squandered. But despite a few tense courtroom drama moments, Gifted is most effective when it is simply showing us Mary sparring with her uncle and learning to live her version of a normal life.

Gifted is presented in an aspect ratio of 2.40:1 The 1080p image is arrived at with an AVC MPEG-4 codec at an average of 31 mbps. The film’s Florida setting means the overarching presentation here is sunny, warm and exceedingly clean throughout. (Evans looks noticeably tanner here than he does during his multiple outings as Captain America.) Speaking of Evans, Frank’s handsomely scraggly beard is an example of the solid fine detail on display here. Although this is a bright presentation throughout, the disc’s inky black levels get a mini-showcase during a brief sunset scene where Frank and Mary are hanging out by the water and both characters are presented in striking silhouette. I would’ve liked to have seen a change in the movie’s visual tone during the brief sequences that are supposed to take place in Boston, but that’s a pretty minor quibble for what is a strong presentation overall.

The DTS-HD Master Audio 5.1 track is certainly livelier than you might expect from a low-key drama. The film’s dialogue unsurprisingly remains entrenched in the front speakers, while the rest of the surround sound field helps immerse us in Frank and Mary’s everyday life. That includes seagull noises in the background whenever Frank is working on a boat or the sound of crickets and other bugs (except for the Palmetto bugs Evelyn hates) during nighttime scenes in Frank and Mary’s housing complex. Sub activity is virtually non-existent, however, which is fine for this straightforward drama that avoids bombast. (At least on a sonic level.)

Deleted Scenes: (8:13) There are five scenes total here, and a couple of them expand on Mary’s interactions with her therapist. The most interesting scene is an extended (and furious) face-off between Frank and Evelyn. (It tilted toward making Evelyn look like too much of a monster, which is probably why it was excised.)

Promotional Featurettes: The most substantial of these featurettes is Gifted: HBO First Look (13:32), which is essentially a compilation of all the other mini-docs here. (This also features adorable footage of young star Mckenna Grace singing the song she used to remember the math equation Mary masters in the film.)

Story (2:08) is, well, pretty self-explanatory (Evans shares a funny moment with his eloquent young co-star at the end of this); An Accomplished Cast (2:06) focuses on the Oscar-(Octavia Spencer) and Tony-winning (Lindsay Duncan) cast members. (Not to mention Captain America); Inside the Equation (1:37) finds Spencer making a connection to her other recent brainy-woman drama (the smash-hit Hidden Figures); Marc’s Method (1:27) features the director excitedly talking about taking a break from blockbuster fare to make a smaller, character-driven drama.

On Location: Gifted: (1:57) Cast and crew rave about filming in Savannah, Georgia, even though the film is set in Pinellas County, Florida (Where I happened to go to high school.) I’m sure Savannah is as lovely as everyone says here, but I was a bit annoyed they didn’t actually shoot the movie in my backyard.

Is an ordinary life really the best thing for an extraordinary child? You’ll have to watch Gifted to find out where the movie lands on that question. (The film was a solid hit, making more than $36 million off of that $7 million budget.)

I’m happy to say the movie’s likable and live-in performances alone (particularly every scene between Evans and his young co-star Grace) make this thoroughly charming drama worth your time.