Posted in: Disc Reviews by Jeremy Butler on August 14th, 2017 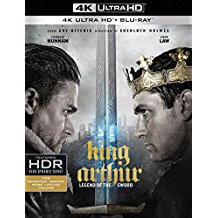 “For centuries man and mage lived side by side in peace until the rise of the mage sorcerer Mordred. Turning his dark ambition against man, he marches on the last remaining stronghold: Camelot.”

So it finally happened: I found a Guy Ritchie film that I didn’t enjoy. I wasn’t expecting much from King Arthur: Legend of the Sword, but it is worth noting that I got even less than I expected. I know that sounds cruel, and I will admit that there were a few things that I did enjoy, but the number of things that went wrong versus what went right is not a close margin. Before we get into it fully, let me issue this disclaimer: the sword in the stone, which is known in the film as Excalibur, according to Arthurian legend is not really Excalibur, which is a different sword that Arthur was given to him after he became king.

Born into royalty, Arthur is the heir apparent to his father, King Uther’s (Eric Bana) throne as well as his father’s sword, Excalibur (again, not the real Excalibur) until the king’s most trusted advisor, Vortigan (Jude Law), betrays Uther and usurps his throne and plots to kill young Arthur. Though he is killed, Uther manages to get his son to safety and prevent Vortigan from taking the sword, which becomes lodged in a stone and submerged at the bottom of the lake. Discovered alone, Arthur is taken in by the ladies of a local brothel, forgetting his past and birthright. However, a legend is whispered stating that one day the born king will return and end Vortigan’s reign.

Decades later, the lake recedes, revealing the sword and strengthening the legend, “Whomever pulls the sword from the stone, is the rightful ruler of the land.” I’m sure you all know what follows. After removing the sword, Arthur feels a wave of memories that were long lost and announces to all of England that he is the born king. Before he knows it, he finds himself drawn into a rebellion, and he must master his sword before his enemy completes his plan to gain enough power to solidify his position as king.

As I initially stated, this just may be my least favorite of Guy’s Ritchie’s films; Man from UNCLE is a close second, but there were still elements that I found charming.  The thing about King Arthur is that it relies too heavily on the special effects to dazzle the audience rather than focusing on the basic storyline. There are some vintage Ritchie elements in the film that were the only saving grace, such as his narrative style and cast banter. Charlie Hunam fares well with that style in my opinion, providing good back-and-forth with all members of the cast. On the other hand, I have to admit that I found Jude Law to be a lackluster villain. His success in the Sherlock franchise did not carry over in the slightest. Not all of it is his fault; his character is underdeveloped, and much of his motivation remains unclear. A bit more time spent on his jealousy over Uther’s throne or possibly a narration providing some backstory could have aided in this area.

Another thing that got under my skin was the sword itself, and I’m not referring to the name debacle, though it is worth noting that the writers did attempt to tie in the Lady in the Lake reference as a way of establishing the sword’s provenance. In regard to the sword, my issue is that even at this moment I do not fully understand its power. I don’t want to give too much away, but needless to say I believe that this was a case of imbuing a mystical object with too much power. Yes, I agree that the sword should have power, but the power that is displayed is never explained in a way that actually provides insight.

King Arthur: Legend Of The Sword is presented in its original aspect ratio of 2.40:1. The ultra-high-definition  image is arrived at by an HEVC codec with an average bitrate of 65- 75 mbps. The ultra-high-definition image presentation certainly delivers even if the film itself does not. There’s a lot of texture here, if not vivid color. The HDR doesn’t get to really shine or pop, because the film’s style is so desaturated when it comes to the colors. Everything is rather gray and drab. But there’s a rather nice gritty feel that allows you to appreciate the added depth sharpness and detail that is offered here. Some of the CG is a little shaky here, but I recall that feeling true in the cinema. Black levels are pretty much average, with the film’s style interfering with any kind of true shadow definition.

The Dolby Atmos presentation defaults to a 7.1 track. The surrounds are impressive at times. The film’s opening sequence has some particularly immersive surrounds. The real star of this film is the sub response. The audio presentation is a room-shaking experience that will pull you down into the muck, if you will. Dialog cuts through pretty well. The music is a touch too loud, at times. Amid all of that you will experience a rather nice amount of clarity in everything you hear.

Arthur With Swagger: (9:41) This is pretty much a Charlie Hunam love-fest. There is a lot of behind-the-scenes footage to be had here.

Sword From The Stone: (18:49) Cast and crew give their thoughts on the Arthur legends. This is pretty much a British production with the requisite national pride in the stories. Strangely, none of them appear to know that Excalibur was not the sword in the stone. It touches on costumes, production design, locations, pre-viz, and the logistics of many scenes.
Parry And Bleed: (5:44) Stunt training and choreography.

Building The Past: (14:00) We get a very close look at some of the elaborate sets. There’s plenty of behind-the-scenes footage of construction and planning the various sets.

Inside The Cut – The Action Of King Arthur: (6:09) More stunt and action choreography.

Camelot in 93 Days: (10:23) This behind-the-scenes feature focuses on the collaboration and camaraderie on the set.

Legend Of The Sword: (5:33) A look at the process of designing the sword.

Scenic Scotland: (5:33) A look behind the scenes of the filming locations in the Scottish Highlands.

I would have also liked to have seen more attention focused on the mage and human conflict, as it appeared to be of importance and would have furthered the plot and added depth not only to our protagonist but our antagonist as well. Needless to say, with fine tuning, King Arthur: Legend of the Sword would have been a different movie entirely and would not rank at the very bottom of my Ritchie list. Granted, it was unlikely to be the box office winner for this week; the chances of that have just gotten even lower.

Jeremy Butler is a film school graduate of the International Academy of Design and Technology. He is been writing for Upcomingdiscs since 2012; however, movies have played a big part of his life for much longer. Favorite genres include horror, science fiction/fantasy, and comedy. Favorite movies are V for Vendetta, Boondocks Saints, Kiss Kiss Bang Bang, and The Godfather.
Annabelle: Creation John Wayne Double Feature Rio Lobo/Big Jake (Blu-ray)