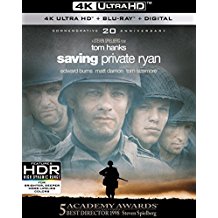 “Someday we might look back on this and decide that saving Private Ryan was the one decent thing we were able to pull out of this whole godawful, shitty mess.”

There are movies that only come along once a decade, sometimes only once a generation. There have certainly been tons of films made about World War II, and some of them have been among those special kinds of films. But there’s something different about Saving Private Ryan, and I’ve yet to encounter someone who hasn’t been touched in some way by viewing the movie. I have been fortunate enough in my life to have lived without experiencing the horrors of war firsthand. For my generation, the idea of war has a certain meaning that has been colored perhaps too much by movies and television. But when you watch Saving Private Ryan, you will experience the closest most of us will ever experience to what it’s like to be at war. There’s a reason these World War II soldiers have been called The Greatest Generation. No where is that more clear than it is here. Now Paramount has made that experience even more visceral, if that was ever really possible. In 4K, Saving Private Ryan comes full circle in its 20 years and immerses us even more into the sights and sounds of the last world war. If you have the DVD or the Blu-ray, you don’t have any idea what I’m talking about. Pick up the UHD Blu-ray, and you will understand.

The film begins with a simple, peaceful prologue before you are literally transported to Hell. An old vet is visiting the graves at Normandy in the present day, at least for the film (1998). When he comes to a particular grave, he stops, and the scene shifts to the troop carrier watercraft just landing at the beaches of Normandy. It’s D-Day, and American soldiers are entering a meat grinder as the German-entrenched gunners pick them off as fast as they can exit their boats. It’s chaos and fear… and death. Never before has a film brought us so intimately close to the action. Most of the horror we experience through the senses of Captain Miller (Hanks), who fights disorientation as much as the German hail of fire. Spielberg uses various techniques to allow us to feel all of this and see effectively through his eyes and hear through his ears as he fights his way to a safe position. The assault on our senses lasts for a half hour of nonstop battle. By the end of it, you’ve also experienced the tremendous overload and fatigue of the soldiers who lived it.

Once the beaches are secure, it comes to the attention of the bigwigs in Washington that a Mrs. Ryan is about to get bad news. She along with literally thousands of families are going to discover that their sons were killed in the invasion. The difference is that Mrs. Ryan is about to get three of those letters on the same day. She has lost three sons, and there is one remaining in action. It’s decided that the surviving son, James Francis Ryan (Damon), must be pulled from the line of fire and delivered safely home to the grieving mother. Captain Miller is assigned the task of moving through occupied France to find Private Ryan and bring him safely out of battle. The unit consists of eight soldiers who will risk their own lives to save one. To say they are resentful is an understatement. In fact, Spielberg excused Matt Damon from the Boot Camp training the rest of the cast had to endure in order to create an actual level of resentment among the cast members. Once Ryan is found, the surviving members of the unit find themselves in the middle of a mission to keep the Germans from crossing a strategic bridge. They are under-manned and low on ammo and resources. It will be a miracle if any of them make it out alive…including Private Ryan.

Spielberg assembled a powerful cast to go along with his amazing cinematography. Tom Hanks and Steven Spielberg had long been personal friends, and their families were close. Both avoided working together out of concern it might damage the relationship. They shouldn’t have worried. Hanks was not only perfect for the part, but he’d go on to work with the director several times in the future, leading to more impressive films. Tom Sizemore was a risk that the director was reluctant to take. Sizemore had already had too many issues with his drug abuse, and Spielberg only hired him on the condition that he would be drug-tested daily during the shoot. Sizemore delivers his best-ever performance here and unfortunately wasn’t able to keep his habit from destroying his career in later years. Matt Damon was a virtual unknown who was just about to break out with his Oscar performance in Good Will Hunting during the shoot of Private Ryan. Another relative unknown at the time was Vin Diesel, who hadn’t really had a featured role yet. His breakout would come in just a couple of years as Riddick. Adam Goldberg was one of several television actors Spielberg used in the film. There were also Ted Danson, Jeremy Davies, and Giovanni Ribisi. The project attracted actors like Dennis Farina and Paul Giamatti in relatively small roles. Look for a very young Nathan Fillion as the first Private Ryan, who turned out to be the wrong guy. When you look at the film today, you might marvel at the number of big names, but 20 years ago many of them were not. Spielberg always did have a knack for finding diamonds in the rough.

Saving Private Ryan is presented in an aspect ratio of 1.85:1. The ultra-high-definition 2160p  image is arrived at by an HEVC codec with an average bitrate of 65 mbps. When the new 4K format was released, it was obvious that Saving Private Ryan had to be one of the films upgraded to the UHD format. At first glance you might not quite get the amazing transfer you find here. Colors were intentionally desaturated 50-65% throughout the film, and you might not immediately appreciate the added benefits. No, color isn’t going to pop here, but that was always the case. Now you get the texture and detail that weren’t available in even the best high-definition transfers. It’s that visceral sharpness that totally immerses you into the film and more than compensates for the lack of color. One without the other can easily pass for a bad release. Now you finally have them joined in a way that hasn’t been possible since the theatrical release 20 years ago. And I can tell you that it’s a game-changer. You’re never going to be able to watch that Blu-ray again. There’s no going back. Black levels are incredible and allow us to cut through the film’s inherent murkiness and get to that wonderful detail. You can see the grains in the explosions of sand. The close-up photography comes alive even more. The weathered faces of the actors take us in deeper to their emotional struggle. Textures extend from the environments to the authentic attention to detail on the equally weathered uniforms. This ultra-high-definition presentation is one of the most stark differences from earlier releases I’ve encountered.

The Dolby Atmos presentation defaults to an impressive 7.1 track. It’s not just about the obvious stuff here. Yes, the surrounds take you completely inside the battle. The surrounds expand to bring you the pings and hits of bullets. The subs turn your home theater into a battleground. When the tanks arrive for the climactic battle, it shakes the walls of a good room. The John Williams score is more subtle than anything else he’s done, but it has the same dynamic feel and explodes in its own field of emotions. It’s that first thirty minutes that delivers not just all that I’ve described, but even quiet times. There is no music, so the sound design is allowed to dominate, and it will surround you from all sides. The moments when our perspective shifts from surface to underwater is one of movie history’s best examples of sudden contrast in sound. A sloppy mix ruins it completely, but this is no sloppy mix. You will experience exactly what Spielberg intended, the likes of which you haven’t heard since you saw it in the theater for the first time. This is a show-off piece for those premium setups, to be sure. This is the disc you’ll put on when you want to demonstrate your home theater.

The extras are all on the second Blu-ray. The first is an HD copy of the film.

Unfortunately, there isn’t anything new here. All of the features can be found in the earlier release of the Blu-ray. You can find all of that here in our original review of the film.

A lot has been said about the film in the 20 years since its initial release. It’s a movie I believe must be found in any legitimate collection. The movie has become as historic as the material it was based upon and will remain one of the best films ever made. After 20 years, I think we can finally call it a classic. I know there’s a lot of skepticism about buying a film on yet another format. At some point you have to ask yourself if the upgrade is truly worth the money. That’s a fair question, and one we all have to ask. I honestly think this is a no-brainer. In my opinion, you don’t own this movie until you’ve had it in 4K. There are few films I would attribute that statement to. There is another one on the horizon. Check it out and decide for yourself. This is one of those cases. “That’s how you rationalize making the choice.”

Gino Sassani is a member of the Southeastern Film Critic's Association (SEFCA). He is a film and television critic based in Tampa, Florida. He's also the Senior Editor here at Upcomingdiscs. Gino started reviewing films in the early 1990's as a segment of his local television show Focus. He's an award-winning recording artist for Omega Records. Gino is currently working on his 8th album Merchants & Mercenaries. Gino took over Upcomingdiscs Dec 1, 2008. He works out of a home theater he calls The Reel World. Favorite films: The Godfather, The Godfather Part II, The Body Snatcher (Val Lewton film with Karloff and Lugosi, not the pod people film), Unforgiven, Gladiator, The Lion King, Jaws, Son Of Frankenstein, The Good, The Bad And The Ugly, and Monsters, Inc.
Rock & Roll Hall of Fame: In Concert Film Movement Festival Favorites, Vol. 4 A Blast – Soldate Jeanette – So Bright is the View