Posted in: Disc Reviews by Archive Authors on January 18th, 2003

Why X-Men 1.5? This 2-Disc special edition re-release is set to coincide with the theatrical release of X2, the X-Men sequel. The 1.5 release is set up to be sort of a Director’s Cut of the original X-Men film. This new version has allowed for the film to be viewed with a number of deleted scenes to be branched into the film (not seamlessly… you have to hit enter on your remote to view the scenes). I am sure you know the premise, but here is a recap:

“Marvel’s classic comic book comes to li…e in this exciting big-screen adaptation. The story focuses on the efforts of a well-intentioned professor, Charles Xavier (Patrick Stewart). By pulling together a group of superhuman mutants, Professor X hopes to prove to the world that these genetically enhanced beings are not the dangerous, evil villains humanity claims them to be. When Magneto (Ian McKellen), an angry mutant, vows to eradicate human existence, it’s up to the X-Men to save the day and keep the world united.” – Fox

The DTS track included on this disc is absolutely fabulous. The surrounds are used heavily, creating a wonderful soundstage that puts you in the center of the action. The bass is deep and clean, the front channels are loud and accurately placed, and the dialog from the center channel is second to none. The Dolby Digital 5.1 mix is unfortunately not as strong. This is not to say that it is poor, but it just sounds dull compared to the lively DTS track. If your system does not include DTS, this disc alone is worth the upgrade!

The video quality on this disc is very good. The contact is fabulous in dark sequences, and the colors are portrayed cleanly and accurately. This 2.35:1 anamorphic widescreen transfer is free from image artifacts and edge enhancements, but there are a few instances of a slight (let me reiterate slight) grain. All-in-all, a wonder video transfer.

Disc one of this 2-disc set contains making-of featurettes that are branched into the film. These featurettes really interrupt the flow of the film, which can be expected, and are mostly uninspiring. Also branched into the film are a number of deleted scenes. These scenes don’t really fit the flow of the film, but are interesting to see. The main feature on disc one is the director’s commentary. This commentary by Bryan Singer is somewhat disappointing. Yes, you will get some good insight into the film, but he is somewhat long winded on some topics (while ignoring other key topics). Certain scenes seemed as though Singer was not even watching the film while condition the commentary. This commentary is worth a listen, but you may get a little bored at times.

Clear your schedule, because disc 2 will take a lot of time to sort through. This disc starts off with a rather lame intro by director Bryan Singer, but then sets up the features in the following sections (all of which include branching to further related content):

This is a very fun film. The characters are cool and well portrayed, and the story is strong for a comic-to-screen adaptation. This DVD, though not really needed (the original special edition was very good), is very good. The DTS audio track is of reference quality, the video look very sharp, and the animated menus are very impressive. There are hours of extras to sort through, but nothing to groundbreaking or outstanding. If you own the original special edition release, the extras alone are not worth an upgrade, but you may want to upgrade just to get the DTS track. Highly recommended. 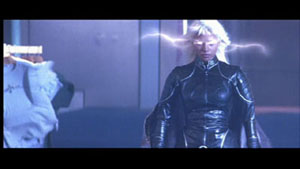