Posted in: Game Reviews by Archive Authors on May 30th, 2003 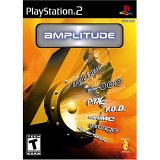 Those players out there that enjoyed the PS2 title Frequency and the arcade game Dance Dance Revolution, now have another dance/music title on the Playstation 2 console to move the beat to. Amplitude from Sony lands this month with a full soundtrack, colorful visuals and varied gameplay.

Players pick up the role of a spaceship as it travels down beams of color and sound. Using the directional buttons or the shoulder buttons results in a beat along an already established piece of music. …he result can be music to your ears, or a bunch of flat notes—it’s up to your eye/hand coordination to determine that.

Although Amplitude is colorful and bright, the graphics are not super cutting edge–and nor should they really be since this is a title based almost solely on sound. Players pick up a rocket ship which has lasers on it that are intended to fire and hit ‘beat marks’ on the colorful rails below them. There are several rails of differing colors which house beats for vocals, drums, guitar, and synth.

There are of course lots of colorful effects going on around the music tracks which are good detractors from the focus needed to stay on beat, and huge video screens and interesting particle effects showcase themselves from time to time as a player slides down the beat rail. The visuals are satisfactory, but like previously mentioned, the focus here is really on the music.

Audio is the strongest part to Amplitude with the original music of many bands being included on the soundtrack. Groups such as Slipknot, Manchild, Papa Roach, Run D.M.C., BT, Weezer, Garbage, P.O.D., David Bowie, Dieselboy, blink 182, Pink, Logan 7, The Baldwin Brothers, and a few others populate the soundtrack with an interesting and eclectic mix.

Indeed, the varied mix of artists is one major improvement of Frequency in the fact that many gamers felt the soundtrack on that previous game was a little too techno and not varied enough. Their wishes for a funky and rocking mix is answered here in Amplitude though and it’s presented in Dolby Pro Logic II surround sound to boot. This is one PS2 title where it definitely pays to have the Home Theater setup connected to your console.

Just like in Frequency and similar to Dance Dance Revolution, players guide a device–in this case a rocket ship with lasers–down a beat rail with targets they must hit with the laser to create a sound or beat. There are three lasers and they are controlled with either the L1, R1, R2 buttons or by the square, triangle, and circle buttons. Any combination of shoulder buttons and the previous three controller buttons can be used in unison and as the beats get faster and harder, using a combination of the six is needed.

The gameplay is challenging without being overly hard and it really becomes addicting after a few levels. There is a short tutorial which players must go through to unlock the first level and after that, skill and luck unlock further levels and goodies.

There are several modes to the play such as the packed single player and the multiplayer which is also supported by the Sony Broadband and Dial-Up ONLINE service. Players can duel it out with one other player at home or go online to the community and mix some funky beats with someone on the net.

In addition to the hefty ONLINE service, Amplitude allows player to use the Remix function to remix their favorite tunes in the game to their own beat. Additional effects can be added to the original tune and player can edit, remix, and save up to 100 remixes on their memory card.

Although Amplitude might be a little average in the visuals department, it more than makes up for it in the amount and variation of music, and modes of game play–both in single player and Online. Fans of music and of dance rhythm games should not miss out on this one–it’ll have you tapping your toes through the summer.