Posted in: Disc Reviews by Archive Authors on September 5th, 2006 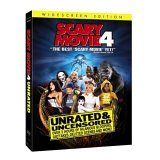 Anna Faris takes a job as a social worker, moving into a house with the evil presences we know and love from The Grudge. Meanwhile, next door, Craig Bierko is about to deal with The War of the Worlds. And off we go, as the movie riffs one parody of recent films after another.

At the helm is David Zucker, part of the team responsible for the Airplane! and Naked Gun films, and much the same kind of sensibility pervades this film. There’s plenty of fun, but…not as much, or as consistently, as those earlier films. Those pics concentrated their parody more or less on one particular genre, and so had more focus, and the laughs were more cumulative. The approach here is far more scattershot, and the movies being mocked extend to Brokeback Mountain. So it’s all in good fun, but the relentless pacing of Zucker’s earlier work is missed.

Pretty snazzy stuff here. Just as much effort has been put into the film’s special FX to make them seem as close to their parodied model as possible, so the sound is spectacular. The opening music is ominous enough to be the real deal, and it is thunderous. The rest of the score is equally atmospheric, and the various FX cues are perfectly placed and very loud. The environmental effects are nice, too, and the dialogue is free of distortion.

As with the sound, so with the picture. The image is extremely sharp, and the colours are gorgeous. Marvellous blacks and contrasts, terrific flesh tones, zero grain or edge enhancement – the works. It all looks perfectly spiffy, and just as lush as the megabudget films it lampoons.

Zucker, producer Robert K. Weiss and writer/producer Craig Mazin get together for the commentary. One might wonder just how much there is to say about this sort of film. They seem to be wondering the same thing, as there are long stretches of silly filler here. Still, the three amigos are present again for the optional commentary on the 15 deleted/alternate scenes. Most of the featurettes are forgettable: “The Man Behind the Laugh” and “Zany Spoof Humor: Zucker Style” are promotional bits masquerading as profiles of the director; “The Visual Effects” is still promo, but a bit more informative; “Youngbloodz” and “Rappers… Actors” are disposable fluff. The best is actually “An Interviewer’s Worst Nightmare,” which is essentially a featurette blooper reel. It is joined by a reel of outtakes from the movie, the theatrical trailer, and some DVD-ROM features.

A couple of years from now, most of the jokes here will be incomprehensible as the models are forgotten. But for now, it’s an evening out.