Posted in: Disc Reviews by Archive Authors on February 24th, 2007 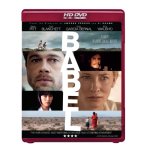 As I right this review, the date is February 24th, 2007 one day before the Annual Academy Award Ceremony, which is a show that this film is nominated in the Best Picture category for. Numerous other reviewers, whether they’re critical or simply just internet journalists like myself, have labeled this one as this year’s Crash. A statement like that made me worry going into this one because simply put Crash isn’t Best Picture material nor is it even close to Best Picture material. While I haven’t seen every other Best Picture nominee, I wouldn’t completely mind if the Academy did award Babel with the Oscar.

Babel tells the story of Richard (Brad Pitt) and Susan (Cate Blanchett), two rather wealthy Americans from San Diego who’re vacationing in Morocco. Their two kids are back in San Diego with their Mexican housekeeper named Amelia. During their vacation in the country, a local herdsmans’ young children find a rifle and, unknowingly, take aim and fire at passing spectators on a bus. Unfortunately Susan is hurt during the incident. At the same time we learn that a trip involving Richard, Amelia and Richard’s two children has put these characters in a complex situation that may result in them not being able to return to America. And at the same time as that’s occurring, another event is occurring in Tokyo involving a widower who just happens to be tied to the earlier mentioned rifle via an ownership right. But this widower also has to worry about the straining relationship he’s having with his deaf daughter Chieko.

By any chance did you happen to catch all that was written above or are you lost? Well that’s the thing with a film like Babel. The film demands that you pay attention to every little sequence, which strongly reminds me of the film Syriana, another film that requires you pay attention to every little detail otherwise you’ll be completely lost. I’ll be honest in that I didn’t catch every little detail the first time through, but that’s probably what makes a film like Babel work. As each event is happening we soon learn that every detail involving Susan is connected to Richard and Amelie, which in turn is connected to Chieko in Tokyo. The film is suppose to carry the type of message that no matter what action occurs, each action has a type of ramification that will effect someone somewhere else in the world. Man if I haven’t heard of a truer statement.

Another rather strong point of Babel is that no one real star (obviously as an American the names Brad Pitt and Cate Blanchett stand out the most) felt like they were in a more powerful role than the other. One may think that Pitt or Blanchett would steal the film away and run with it. Such isn’t the case here as acclaimed director Alejandro Gonzalez Inarritu took his time with every character here making sure each character was carefully laid out. His direction in each sequence is excellent and I swear that he’ll win the Best Director statue someday.

Babel will be one of those love/hate affairs for viewers. If viewers can open their eyes and ears to the power this film has, I strongly feel this film has an important message that everyone needs to see, hear and feel. Definitely check this one out folks.

Presented in a 1080p, AVC/MPEG-4 encoded, 1:85:1 Widescreen Aspect Ratio, Babel has one of those transfers that isn’t eye-popping 3-D image that say Paramount’s M.I.III had, but has the type of transfer that accentuates the film.

Color usage, albeit somewhat toned down, is still affective here with solid reds and blacks. Grain is present but not in a manner that becomes annoying. The grain felt rather appropriate here. One part I really enjoyed is how the film’s exterior shots (particularly the night sequences) were exquisitely shot here. Each scene felt like it was paying attention to the film’s visual style instead of creating a boasting image. This wrapped up an image that was solid throughout.

Arriving with the standard Dolby Digital Plus 5.1 (encoded at the usual 1.5mbps), Babel wouldn’t be the first disc one would grab to demo off your HT rig, but that doesn’t mean much here.

The film carries the type of audio that doesn’t necessarily need to be cranked up loud but rather has the type of audio that one can just listen to and let it absorb you. Anyone who has seen this film from beginning to end knows this one is full of dialogue. Luckily here the film’s dialogue is excellently reproduced with no real evidence of muddled dialogue. Surround usage is kept to a minimum with the rears never becoming fully active. It seemed to me like the rears were almost shut off (in fact I turned it up just to see if my speakers were disconnected).

Dynamic Range was fine with little discrete audio coming through fine. I liked how the discrete effects were powerful in some sequences (when they needed to be), but were quiet in the accompanying sequences. All this helped to deliver the film’s powerful message in a more meaningful manner. All in all this is a solid effort from the folks at Paramount. I just hope they can try to do something in the surround department for the eventual re-release of the film.

Unless you count the film’s Theatrical Trailer as a feature, there’s not anything else found on this one. I’m sure if the film wins the Best Picture Oscar we’ll see a feature-laden release down the road.

The only real negative is that a film this important is completely devoid of any real substantial features, which is a big disappointment. While Paramount has produced a fine disc in the V/A department, the lack of features (especially for a big award film like this) is a completely shame. This results in a very strong rental for those who are curious and a recommend purchase for the bigger fans.

A Good Year (2006) Highly Defined – The World of High Definition