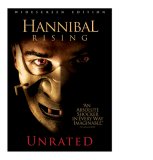 Hannibal “the cannibal” Lecter is widely recognized as one of the most compelling villains in modern fiction. This film, Hannibal Rising, based on the Thomas Harris book of the same name, presents the origin of the cannibalistic psychopath.

Quick context for this review: I’ve seen all of the Lecter films, and read none of the books. I liked Silence of the Lambs best, followed closely by Manhunter and more distantly by Hannibal and Red Dragon, the 2002 Manhunter remake. As such, I’ve certainly wondered about the story behind the madman. Was he born, or made? Or was it nature amplified by nurture?

In preparation for viewing Hannibal Rising, the foremost question in my mind was not how, or why, but should this story be told? Mysteries solved tend to lose their attraction, so it’s a risk. Obviously, the cat’s already out of the bag. So what’s the damage?

The film follows Lecter’s (Gaspard Ulliel, A Very Long Engagement) story, from World War II onward. It begins with Lecter as an 8-year-old boy who’s trying to protect his sister after his parents are killed by Nazi violence. Holed up in a remote cabin near his family’s estate, Lecter and Mischa, his sister, don’t have much hope for survival. When a group of war criminals-slash-aspiring SS soldiers shows up looking for food and a place to hide, the Lecter children become their captives in the cabin. But there’s no food, and it isn’t long before the cruel men begin sizing the children up for a feast.

Fast forward several years, and Lecter is a young man tormented by nightmares from those events in his past, living in a Soviet work house that has been established in his own family’s estate. He’s not doing well there, and soon escapes across the Soviet border to find his widowed Aunt, Lady Murasaki Shikibu (Gong Li, Miami Vice), a Japanese woman steeped in samurai tradition. She takes him in and, as their relationship flowers, Lecter begins to develop into a cold, ruthless monster, in love with his Aunt but overpowered by a need to avenge his young sister’s death.

And so the story goes. Essentially, the film explains Hannibal Lecter, taking a dark, mysterious, terrifying villain and helping us understand what made him this way. It gives no indication that Lecter was born a psychopath, so we must assume he became one as a result of his parents’ death and his sister’s gruesome murder. Just as I worried before viewing the film, explaining Lecter goes a long way toward removing the fearsome nature of one of our greatest villains. Even worse, the Lecter of Hannibal Rising is more a vigilante than a psychopath. The people he targets are evil men who committed terrible acts during the war and are painted as deserving of death. Where is the psychopath who targets guilty and innocent alike?

A further detriment to the character is his lack of action against the French cop who knows what Lecter is up to, and who threatens to arrest Lecter if he kills in France. In other words, the man is an adversary, interfering with Lecter’s plans. What more reason would Lecter need to club him and eat his bones?

Despite the film’s lush production values, I could not get past the feeling that a legendary villain was being undermined from start to finish. Would Silence of the Lambs have the same impact if viewed with this origin story in mind? I highly doubt it, and that’s a huge strike against Hannibal Rising.

So the film, rather than injecting new blood into a franchise, sucks the life out of one of modern fiction’s greatest villains. How’s the DVD?

Hannibal Rising is presented on one disc, in 2.35:1 widescreen format. It looks very good. The film has a lot of challenging visual material, with plenty of dark, detailed scenes, a variety of lighting schemes and some rapid bursts of action. All is handled well by this digital transfer, which is free of compression issues or digital artifacts. Blacks are deep, colours are rich though not vibrant and the picture is generally crisp.

Menus are animated and scored. If you haven’t seen the film yet, try not to watch the clips on the main menu, which might spoil some key events.

The main audio presentation is Dolby Digital 5.1, and it’s as pleasing as the video. The overall sound is lush and full, with a nice balance between dialogue, score and effects. The surround channels are used mainly to fill things out or for ambient effects, and the LFE channel participates frequently, laying a solid base for the orchestral score.

Audio is English-only, while subtitles are available in English (SDH) and Spanish.

Hannibal Rising – Unrated Edition could have been meatier in the bonus material department. What’s here is ok, but not all that in-depth. Here’s the breakdown:

Hannibal Rising should never have been written, let alone filmed. It takes a fantastic villain and reduces him to the inevitable result of a series of traumatic events, and resemblance to the true Hannibal Lecter, of Silence of the Lambs, is sketchy. This DVD is well-presented, but not recommended.