It was the summer of 1993, this little review writer was on his way to college for the first time. Among the many things I took to college with me, one of them was a computer. The computer was top of the line at the time; a 486-33mhz processor chip and an 170 meg hard drive. I said meg. Windows 3.1/Dos 6.22 was the OS combination and it had one game on it besides Solitaire. A shareware copy of Wolfenstein 3d. The game had actually been already out for a year but it was a popular game and on my pc as included software. Upon entering college, I played that game for hours and the hours turned into days. I would eventually buy the full copy of the game along with level editors and various mods. Thru the years, I have revisited the game on consoles and again on PC. Xbox Live Arcade out of the blue decided to release a port of the PC game and encourage me to play the adventures of BJ Blazkowicz once again. I’m glad they did.

It’s hard to believe that these graphics are over 15 years old for the most part. Sure, they redid parts of the title menu to make it Xbox Live friendly and added a few minor details, but it’s the same PC port brought over for the Xbox 360. Colors do seem a bit dated and there is that familiar clipping every so often, but it’s fairly easy to tell what is going on and they actually seem to move a lot cleaner and precise than on my 486. One could hope for an HD remake (or a port over of the 3do version), but this is one of the times I’m glad they didn’t.

The sound is reproduced in 5.1 Dolby Digital sound, typical for almost any Xbox release. The familiar sounds I was used to do seem to have upgraded a tad bit. They seem louder and crisper than they used to. It could have also been because my speakers back in 1993 were the equivalent of 2 tin cans and a piece of string. That aside, it is certainly faithful. German sounds still come out of the soldiers, dogs yelp and the undead make whatever sounds they are trying to make. The original theme even echoes throughout the menus. It’s a tiny bit above average and shouldn’t keep anybody too annoyed at its repetitive nature.

Since this game was originally labeled as shareware, the first episode really can be made its own since that was how it was marketed. You are B.J. Blazkowicz and you have been captured by the Nazis while trying to find the plans for Operation Eisenfaust and imprisoned in Castle Wolfenstein. Your goal is simple, escape the castle prison. The only weapons at first are a knife and a pistol. However, by beating enough SS guards and finding exits you will come face to face with Hans Grosse to complete the first episode.

The next episode involves a visit to Castle Hollehammer and uncovering the army of undead mutants and fighting Dr. Schabbs. The third and final original episode takes you under Reichstag where you face Hitler himself. Episodes four through six are interesting because they are actually prequels. In these episodes, you are exploring weapons research, maps and plans of the chemical war, and fighting the likes of Dr. Otto Giftmacher, Gretel Grosse and finally General Fettgesicht.

The game is traditionally recognized as creating the first person shooter. As such, the controls are simple. In this port, you can move around, change weapons, shoot, open and close doors and search for secret passages. There is no jumping or aiming at the sky to catch a guy on a ledge. This is straight-forward room to room. Wolfenstein wasn’t like a lot of today’s shooters. There isn’t some crazy weapon power (only 4 weapons, a knife, a pistol, an assault rifle, (what you will use for most of the game) and a chain gun) or amazing graphics.

The real strength of Wolfenstein was level design. Past the first couple of levels, each level was long and usually involved a lot of backtracking. Often a level would split into two to four different sections where you had the chance of accidentally finding the locked door before you found the key. Therefore you had to backtrack and go the other way, fighting through some bad guys and retrieving the key before proceeding. Levels would be designed in the shape of swastikas and there were even levels which were comprised of one secret area after another with very few doors.

That is where the true difficulty of the game lied. There wasn’t much challenge to defeating a few SS Guards unless they piled five or six in a room at a time. Even the bosses could be defeated fairly easily with some clever strafing and using doors & corners to your advantage. The challenge was finding the keys and then finding the exit in that order. So more often than not, you would find it in an incorrect order and be forced to backtrack. A lot of times when people backtrack they become less careful and that’s when the game liked to get you. The game was a good exercise in staying calm and making sure you searched each mission down to a science.

The game has six episodes with ten missions a piece. Fifty four of these levels are mandatory and the optional secret levels are found by uncovering secret doors. Be prepared, these secret levels are complete mind games with secret exits, multiple locked doors and even some interesting and different enemies to conquer. The levels will take some time to get through and unfortunately once you are done, you will only visit them again if you are into speed runs or defeating them at a higher difficulty.

There are twelve achievements in this game and the usual two hundred points. The achievements practically echo Id’s release of Doom a while ago. There is an achievement for each of the six episodes, an achievement for 100% kills and 100% treasures on any floor. The remaining four achievements involve finding one secret area, exiting any level, completing all episodes on the 2nd hardest difficulty (or higher), and completing one level on the hardest difficulty setting. These aren’t exactly rocket science, just require some time to complete. In fact, if you know what you are doing, you can acquire 5 of these achievements on the very first level. The achievements for the game can all be acquired in one play through, though it can be stretched out for a couple of sessions.

In preparation for the August release of the new Wolfenstein game for the major HD consoles, they decided to port over the original release. They also included one achievement (One of Many) which will actually give you $1,000 for completing it. It was my hope that they would include more of these little nuggets like Fable II Pub Games did. However, that was not the case. That aside, the fact that this piece of videogame history is only 400 points is quite a value. It might be a straight PC port, but when this game has had so many revisions over the years with changed levels, changed graphics and even rats where there are dogs (Super NES and their silly censorship practices), you can appreciate keeping the game as is. If you love first person shooters, at least consider giving this a chance. Classic level design, old school sound effects, and a whole lot of Hitler and Nazi symbols make this a fine choice. Recommended. 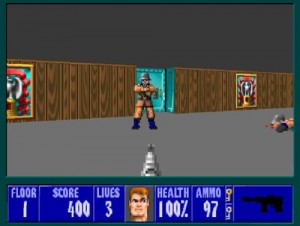 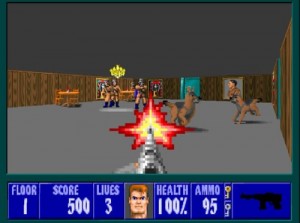 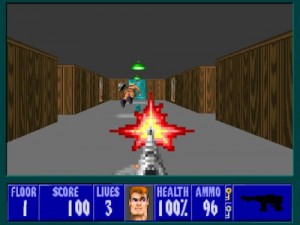 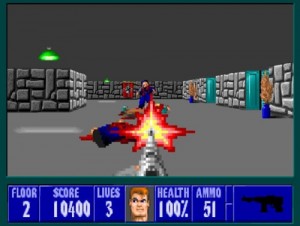 Michael Durr has been reviewing movies for the better part of fifteen years now. He primarily enjoys thrillers, sci-fi, animation and even a little courtroom drama. His favorite films include Escape from New York, the Goonies and anything with Alyssa Milano. When he’s not praising Kurt Russell as the greatest actor of our time or scratching his head over a David Lynch flick, he’s spending time at home in Texas with his lovely wife, Lori and his amazing son. How they put up with him is a mystery, but even Basil Rathbone doesn’t have the time to solve that one.
Cellfactor: Psychokinetic Wars (Xbox Live Arcade) Nature’s Most Amazing Events