Posted in: Disc Reviews by Michael Durr on August 13th, 2009

Next month, my mom turns fifty-eight years young (I would say old, but I’m pretty sure she can still reach across county lines and wallop me one). She’s been around for quite a while and despite the typical things that age do to people, she’s still a kicking. This usually means gossiping to neighbors, clipping coupons and watching soap operas. My mom has watched a lot of soap operas including General Hospital, Young & The Restless and some night time ones too. The night time soap operas I speak of are of yesteryear like Dallas or Dynasty. That’s why when I saw “These Old Broads”, I knew in a minute who this release was aimed at.

In the early 1960’s, there was a musical made called “Boy Crazy”. It became a cult sensation up until this very day. It starred Kate Westbourne, Piper Grayson & Addie Holden (played by Shirley MacLaine, Debbie Reynolds, & Joan Collins respectively) who were known for their beauty, charm & musical talent. They were also known for their backstage antics which included cat fights and sleeping with directors.

Fast forward to the late 1990’s and Gavin (played by Nestor Carbonell ), a network television executive, decides to pitch a deal to Wesley Westbourne (played by Jonathan Silverman), adoptive son of Kate Westbourne. It seems that Wesley is trying to produce a documentary. Gavin okays the documentary but first wants him to take on a 90’s re-release of “Boy Crazy”. The only catch? He’s got to convince the three original stars to be in the picture.

Kate Westbourne is the only one still actually in the business, Piper Grayson runs a hotel casino along with her husband Bill (played by Peter Graves), and Addie Holden is secluded away in her house with her mother (played by Pat Crawford Brown). This is no small feat, but Wesley finds that the secret to signing all three lies in their mutual agent, Beryl Mason (played by Elizabeth Taylor). After some negotiation, a deal is signed and the special starts filming.

Kate, Piper and Addie have some initial trouble with the dance moves which lead to insults, arguments, and a fired director (played by Kevin Nealon). The network executive, Gavin starts to worry and gives an ultimatum to Wesley that he must control the women and get them in line. But can the three women hold it together long enough when dead mobsters, stealing husbands and impending deadlines stand in their way of completing the special?

This “movie” was actually created for television, written by Carrie Fisher & directed by Matthew Diamond. It also was the last movie that Elizabeth Taylor ever did, and you’ll notice you always see her sitting down. Despite that, she puts on a great performance, full of wit and charm. That shows across the board. Almost every actor or actress in this film puts their best foot forward and is a joy to watch. Shirley MacLaine carries the film in her lead role, while Joan Collins & Debbie Reynolds throw zingers for about ninety minutes and never stop.

The actors & actresses are fantastic, whether it is the lead roles or the supporting ones. Then what’s the problem? The writing. Sure, it is entertaining to watch these ladies of yesteryear insult each other. The plot however is full of holes and hooks that never go anywhere. The issue is you would never notice it because these gals can make a paper bag look like it should win an Emmy. They didn’t have much to work with, but they did far better with it than anybody else could.

Since this television movie was produced in this decade, there is an anamorphic transfer of 1.78:1 attached to it. It’s not bad, obviously the movie was built on the stars in the picture and not the scenery behind it. Color is fairly vibrant and it’s about what you would expect from a television movie.

Audio is provided in Dolby Digital 2.0 Surround. The audio as expected is completely dialog. Dialog is thankfully clear and fills the center speakers very well. You’ll catch the zingers for the most part, some of the accents are a little thick. There are no sound effects to really speak of, just talkie parks all the way through. Subtitles are provided for the English Hard of Hearing.

These Old Broads is a wonderful example of how even with the best stars and brilliant supporting actors and actresses you can have a movie that isn’t that great. It’s got some wonderful one-liners and I could listen to Joan, Shirley and Debbie all day. But it has no meat on those bones. The writing isn’t there and this release is bare as they come. The video and audio are average and there are no special features. I understand I wouldn’t even be able to get commentaries from the stars, but a short piece from Carrie Fisher would have been nice. I recommend this to those ladies who watch soap operas and live vicariously through them. In fact, I think my mom should get this as an early birthday present. 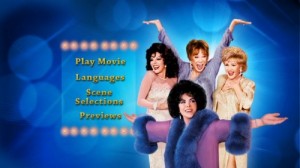 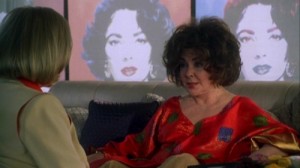 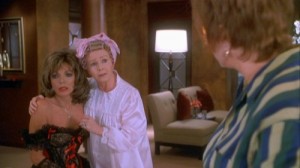 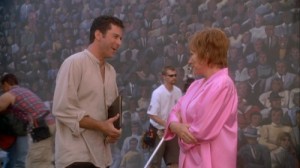 Michael Durr has been reviewing movies for the better part of fifteen years now. He primarily enjoys thrillers, sci-fi, animation and even a little courtroom drama. His favorite films include Escape from New York, the Goonies and anything with Alyssa Milano. When he’s not praising Kurt Russell as the greatest actor of our time or scratching his head over a David Lynch flick, he’s spending time at home in Texas with his lovely wife, Lori and his amazing son. How they put up with him is a mystery, but even Basil Rathbone doesn’t have the time to solve that one.
The Inglorious Bastards (Blu-Ray) Gigantic