Posted in: Disc Reviews by Archive Authors on October 22nd, 2009 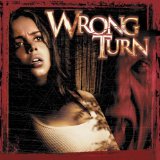 I guess they didn’t tell the producer and director of Wrong Turn that an official remake of the Texas Chainsaw Massacre would be gracing the screens in October of 2003. This movie borrows very heavily from the horror classic in terms of the setup, the killers, and the level of gore. Now that being said, this is an above average horror film with excellent makeup and special effects delivered by one of Hollywood’s greatest – Stan Winston, and a good performance by Buffy and Angel regular Eliza Dushku (although it is kind of weird seeing her scream and run away from villains that would be considered lightweights in the Buffy and Angel universe).

The film follows the ill-fated decision by the main characters to drive on a seldom used dirt road to avoid a lengthy delay on the interstate. Once they discover that a barbed wire trap laid in the middle of the deserted road has incapacitated their cars, four of the group of six leave the vehicles to find help. Well, you don’t have to think too hard to guess what happens next – our two remaining young people are the first to encounter the chromosomally challenged inbred hillbilly cannibal killers. Enter the first of many Hollywood horror clichés that are used in this film. The second cliché happens upon the viewer quickly thereafter as our remaining four young people come across the dilapidated home of the aforementioned chromosomally challenged inbred hillbilly cannibal killers. They first investigate the shack only to find a collection of various items that have been left by the previous victims of the inbred family, and upon further searching then find the remains of the victims on plates, in jars, and of course in the refrigerator. As this grisly find is made, the hillbilly three return home for an early lunch, while our heroes scramble to hide and not become dessert. Of course they are discovered as they make their escape (cliché #3) and spend the rest of the movie being chased, culminating in a showdown back at hillbilly central.

While watching the extras and listening to the audio commentary, often the film is described as a ‘70’s horror movie’ which it really is (aka Texas Chainsaw Massacre). However, this follows in the footsteps of recent teen slasher flicks like Jeepers Creepers which put a unique spin on the villains and have solid stories which have improved the horror genre over the last few years. A decent story and some believable performances (it’s pretty easy to believe Dushku can take on a few hillbilly cannibals after fighting hordes of vampires and demons for a few years) make this a better than average thrill fest.

Wrong Turn is presented in its original aspect ratio of 1.78:1. The 1080p image is arrived at with an AVC/Mpeg-4 codec. The film has great color depth which is noticeable in the various shades of green which are present in the forest during day scenes, which is then contrasted with some nighttime action during which colors are still sharp and distinguishable. It’s an upgrade from the DVD most definitely. The image is sharper and just pops better. Black levels aren’t really improved, however.

The DTS-HD Master Audio sound is used quite effectively to improve the overall creepiness of the movie. The surround effects greatly enhance the environmental sounds and will at times scare viewers more than the visuals will. The soundtrack is pretty standard horror movie fare – suspense followed by chase themes. Nothing impressive here. There is fair use of bass effects, and the sound effects are decent. This isn’t the kind of film that particularly shines here with an uncompressed audio track.

This disc has a great commentary track with director Rob Schmidt and the two main actors, Desmond Harrington and Eliza Dushku. It is quite evident that they had a lot of fun making this film and really seem to enjoy doing the commentary. They share a lot of insights about what are the basic elements of making a good horror movie and how to pull them off.

All features are in standard definition.

Deleted Scenes: There are 5 deleted scenes which only add a bit of a romance between the two main characters, which is completely unnecessary (hence the reason for deletion). They also include the dailies of a death scene – it’s interesting the first 3 times you see it, but by the 8th take it gets kind of redundant.

Making Of Wrong Turn: (4:03): Goes behind the scenes from the standpoint of the director, actors and the producer/special effects wizard Stan Winston. They way they talk about it, you’d think that it was the next best thing to the “sixth sense,” which it clearly is not. It’s good, but not that good.

Eliza Dushku – Babe In The Woods: (3:42) – pretty self-explanatory. I think that there’s definitely a future for Ms. Dushku in horror and action genres. They chronicle Eliza actually doing most of her own stunts. Impressive…most impressive.

Stan Winston: (4:40) The best featurette, however, is the one on Stan Winston. This guy is a legend in special effects and makeup – he made the Queen Alien (from Aliens) and the Predator. Can it get any better than that? Well actually yes…he was also involved in the process to bring the dinosaurs to life in Jurassic Park. Very cool!

Fresh Meat – The Wounds Of Wrong Turn: (9:25) Displays the various techniques used to bring some very unique kills to the big screen – some aided by a computer and some not. It also chronicles the creation of the hillbilly three from concept to finished product.

Wrong Turn continues a favorable trend in horror movies which focuses on a solid (but clichéd) story and some decent acting. I hope the actual remake of Texas Chainsaw Massacre is at least as good as this. By the way, continue to watch after the credits roll for cliché #4. Ready for a sequel? Now there are two of them. Reviews to follow.