Posted in: Disc Reviews by Michael Durr on February 21st, 2010

Greetings here from your favorite neighborhood reviewer and Spidey-expert: the infamous Kedrix. I certainly have a habit of appearing whenever there is a Marvel or DC superhero involved, especially if the source material happens to be animated. Needless to say, when the opportunity to review Spectacular Spider-Man both volumes 6 & 7 came available, I jumped to the task. Somehow, we missed Volume 5 (I have seen the first four), but I’m sure we can pick right back up and get to the spectacular action. (one paragraph in and we are already using bad puns, tsk tsk)

Volume Six of Spectacular Spider-Man is something short of a breather for Spidey as he is recovering from some run-ins at the hands of Mysterio & Kraven the Hunter. He even had yet another altercation with Dr. Octopus. Things are also looking up for the web slinger as he even gets invited to Flash Thompson’s birthday party. Little does he know he is about to run into the Sandman who is still looking for his big score.

The Sandman is a formidable opponent but there is perhaps a more important adversary to attend to. It starts out innocently, Spidey thinks he is seeing Eddie Brock, but maybe he’s been working too hard and been up one too many late nights. Eddie Brock is also known as the treacherous Venom and the fact is he is stalking our friendly neighborhood Spider-Man. Eddie also knows that Spider-Man’s secret identity of Peter Parker. Will Spidey be able to defeat the menace known as Venom and keep his secret a secret?

But what exactly are they after? It seems that in a nearby museum, a very special item is up for auction. An auction among the super criminal. With stakes extremely high, the question of who is going to win this very special item is anybody’s guess. There are bound to be a few special guests with cameos from Black Cat, Shocker, Ricochet, and a very special green costumed villain who loves to torment our favorite spider-bitten super hero. Can Spider-Man uncover the plan and save New York City from gang warfare?

I think I said it last time I tackled the Spectacular Spider-Man series, but this is the best animated super hero show I’ve seen since Batman the Animated Series & X-Men. It has a great story, some really awesome animation and does a wonderful job of showing me a wide variety of villains and story lines. In the very first episode of Volume 6, they bring in Sandman (one of my favorite characters from the Spider-Man world) and he walks the line between good and evil so well, just like the comics.

Then they keep up and before you know it, it’s an arch with Venom. From there it bridges into an altercation with Silver Sable, Hammerhead and even Tombstone. Before you know it, you’re probably through a batch of cookies and a couple of glasses of milk and wanting more. The only problem is these volumes are sold separately and there are three measly episodes per disc. Only recently did they actually produce a season set for the first season.

Another issue albeit a minor one, is that at the beginning of this season all episodes were now on the Disney XD channel. The production value is still high but you never quite get the sense that our web slinger is in any real trouble. The only trouble you can find is whether or not Peter Parker can actually keep a girlfriend (which oddly alternates between Liz Allan and Gwen Stacy with barely any mention of Mary Jane Parker anywhere). It’s still a fantastic six episodes, just something it descends into New York Spidey 10001. (everybody who gets that reference, give them a custom J. Jonah Jameson cigar)

The series is presented in 1.78:1 Anamorphic Widescreen. It’s hard to not appreciate that 1.78 is the new aspect of choice when it comes to cartoons (it was difficult to get them out of the 1.33 era). Spidey is as vibrant as ever. The same can be said for his friends, villains, and even the assorted mutts wandering around New York City (not J. Jonah Jameson). Everything looks great here and this is a wonderful blend of old style animation with updated technology.

The audio is provided in 5.1 English Dolby Digital and 2.0 Dolby Digital French. Spider-Man cartoons are also especially entertaining in 5.1 surround sound. It’s not going to live up to the standards of a motion picture but they do well with special effects and things that go bump in the left rear speaker. Dialog is clear and the kid in you (or next to you) will be singing along with the theme music. Closed captioning is also provided.

As expected, we do get a pair of eco cases. However, I do want to point one odd thing. The left part of the case, there is the familiar ring as with any eco case but the top two panels are filled in. Doesn’t look like a manufacturing mistakes, it simply looks like they are trying to create the familiar eyes of the Spider. Like I said, odd but kinda cool. Still doesn’t make me like eco-cases anymore than usual.

A show so catchy, you might find yourself singing the theme song, here is another 6 episodes in two separate volumes of our favorite web slinger. From Venom to Gang Warfare, fans should find enough entertainment to keep them glued to their television for a good two hours. Real fans of the series will be split between buying the volumes when they are first available or holding back for the eventual season sets. As long as this great show continues, I think that will satisfy the majority of super hero watchers around the world. Recommended. 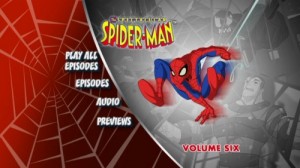 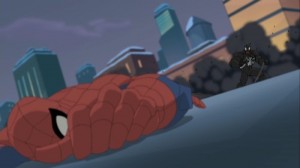 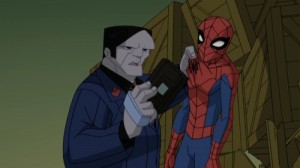 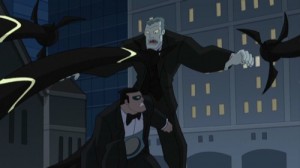 Michael Durr has been reviewing movies for the better part of fifteen years now. He primarily enjoys thrillers, sci-fi, animation and even a little courtroom drama. His favorite films include Escape from New York, the Goonies and anything with Alyssa Milano. When he’s not praising Kurt Russell as the greatest actor of our time or scratching his head over a David Lynch flick, he’s spending time at home in Texas with his lovely wife, Lori and his amazing son. How they put up with him is a mystery, but even Basil Rathbone doesn’t have the time to solve that one.
The Keeper Lincoln Heights: Season One