Bump in the Night: The Complete Series

In September of 1993, an animated series using the wonders of stop-motion animation was broadcast on ABC. The name of the series was called Bump in the Night. It would run for twenty six episodes, spanning over two seasons. It was created and directed by Ken Pontac and David Bleiman. It also featured the vocal stylings of Jim Cummings, a man perhaps most famous for his Winnie the Pooh performance.

Mr. Bumpy (for his warts) is a small, green and purple monster who lives under the bed of a ten year old boy. He loves to eat socks, dust bunnies, snot filled tissues and other assorted things most people would consider disgusting. His disposition can be easily described as vile but yet easy going. Oh yeah, if you haven’t figured it out yet, he doesn’t brush his teeth.

Then there is Squishington who lives in the toilet tank and is Bumpy’s best friend. He is a neat freak, blue and easily scared. He is the perfect fodder to Mr. Bumpy’s zaniness. The final addition to this cast is Molly Coddle, a comfort-rag doll gone wrong who belongs to the boy’s sister. Her role is to act as the straight man, or woman to the bizarre and crazy actions of the other two monsters.

A typical episode will have two eight or nine minute shorts (with an occasional episode lasting the full twenty minutes) and then followed up with a feature called Karaoke Cafe where they would sing about the events from the past episode intermixed with clips and other assorted goodness. If you like over-the-top children animated comedy with a couple of characters you might find in the back closet that hasn’t been cleaned in 5 years, then this is for you.

I don’t know if I was ever a real fan of stop-motion technology, heck even the California Raisins kinda scared me as a mere child. However, by this time I was entering college, I think my clay-o-phobia was in the decline. The idea of a filthy gook monster being friends with a blue clean freak was a pretty good concept. The stories were completely displaced from reality with jokes to match.

What made this work was the amazing voice put on display by Jim Cummings who made Mr. Bumpy shine above anything and everything that was in the episode. He even ended up getting a nomination for an Emmy in Voice Acting. But despite the stories and Jim Cummings, there isn’t enough here to keep anybody above age seven interested. It’s a shame because the show starts off rather hot (one needs to look no further than Baby Jail/Night of the Living Bread), but goes cold in a hurry.

The video is presented in 1.33:1 fullscreen. Stop-motion does hold up well overtime, even looking better than a lot of cartoons today. Even though you can now see some of the imperfections in the clay and other building materials, it still feels modern and the colors look good. Mr. Bumpy’s warts are a little too realistic and I fear I might need a vial of Purell after this is all said and done.

The audio is presented in English 2.0 Dolby Digital. Dialog is strong and the frequent musical numbers come through quite clear. Effects actually come through the 2.0 Stereo settings. Again, I was a little surprised at how good an animated show from the nineties can sound in today’s video format. Subtitles are not provided which is a problem I will be explaining later.

Bump in the Night is a cool animation show with an absolutely amazing voice actor in the lead. Jim Cummings carries the show even if the writing doesn’t really appeal to anybody except the really young kids. The discs are a very good effort from Shout Factory as they continue to bring classic television shows back from yester-year. If you are looking for a set that’s truly different for your youngins, this would be a fine choice. As the adult, you probably won’t stick around but your kids should.

Episodes
Disc One (Season One)
Made in Japan/Dr. Coddle, M.D.
Gum Crazy/Baby Snail
Hide and Go Freak/Better Homes and Garbage
Not of This Boy’s Room/To Sleep Perchance to Burp
Danger: Unexploded Squishington/Loss of Face
Sock It To Me/Comforting the Uncomfortable
Baby Jail/Night of the Living Bread 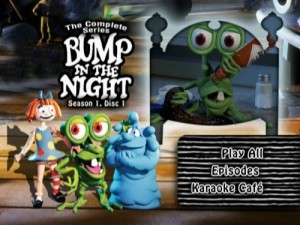 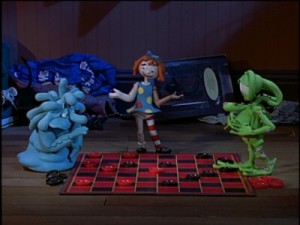 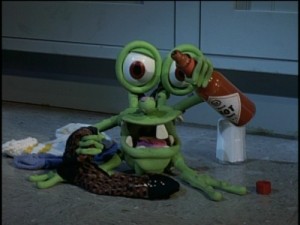 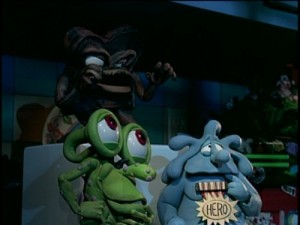 Michael Durr has been reviewing movies for the better part of fifteen years now. He primarily enjoys thrillers, sci-fi, animation and even a little courtroom drama. His favorite films include Escape from New York, the Goonies and anything with Alyssa Milano. When he’s not praising Kurt Russell as the greatest actor of our time or scratching his head over a David Lynch flick, he’s spending time at home in Texas with his lovely wife, Lori and his amazing son. How they put up with him is a mystery, but even Basil Rathbone doesn’t have the time to solve that one.
Preacher’s Kid (Blu-ray) Marcus Welby, M.D.